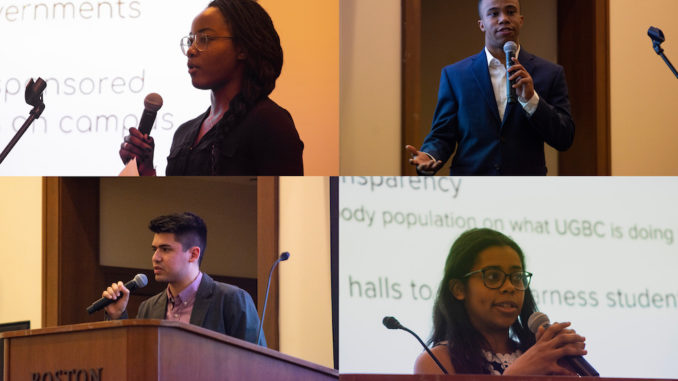 In an extended platform submitted to The Heights, Jackson and Perez expanded on their campaign themes: “community, commitment, and collaboration.” Many of their ideas focused on bringing often-excluded groups—prospective Eagles, alumni, and international students—into campus conversations.

“We intend to start conversations that give students opportunities to share their different and equally important stories, foster connections between students and alumni, and collaborate with organizations and departments across campus with the intention of creating events that are personable, relatable and informative,” their platform said.

The two sophomores outlined several major initiatives with specific goals for each, beginning with “Flight,” a program they described as a “pen pal” system. Current BC students could choose to write to incoming freshmen and prospective applicants, especially high schoolers who identify as AHANA+. Flight would also help BC undergraduates reach out to alumni mentors. This program could serve as an addition to Compass Mentorship Program, which is geared toward freshman AHANA+ students.

Jackson and Perez endorsed the expansion of hall talks led by the Thea Bowman AHANA Intercultural Center (BAIC) as part of their campaign’s broader focus on “conversation.” They also proposed an on-campus “Pride Summit,” modeled after the annual BC Women’s Summit, which took place last week.

“Everyone on this campus should have a place where they feel understood, valued and supported, and we feel that a Pride Summit would be a good step towards improving this reality on our campus,” they said in their platform.

Jackson and Perez vowed to create “a ‘revolving door’ conversation” when approaching administrators.

“We plan on doing this by being persistent and efficient in any project we take on with the administration, until there is no doubt that UGBC is always one step ahead, and prepared to represent the student body in the best way we know how,” they said in their platform.

“Along with the themes listed above, a specific emphasis will be placed on diversity, inclusivity, transparency, student input, mental health, and the environment,” their website said. “Specifically, we seek to encourage uncomfortable conversations and engage directly with the administration.”

Osaghae and Brooks, running on the slogan “Connecting U with UGBC,” also greatly elaborated on their initial platform in the documents they sent to The Heights, contextualizing their proposed initiatives within their goal that UGBC be truly representative of the student body. The platform aims at “intentional, innovative, and intersectional” leadership.

Some of their platform echoed ideas from last December’s Student Assembly resolution. They called for the expansion of University Counseling Services’ group therapy sessions to include “more groups centered around marginalized communities,” such as LGBTQ+ students, students of color, and students with disabilities.

Other provisions called for the administration to add a democratically elected student position on the Board of Trustees and create a mandatory yearlong first-year seminar that would cover “issues of social identity, historic and contemporary structural injustice, and cultural competency.” Both policies were explicitly endorsed in the December resolution.

Their platform listed several reforms to BC academics, most notably the elevation of the African and African Diaspora Studies program into a full department.

Like their opponents, Osaghae and Brooks devoted a large portion of their platform to advocating for BC’s LGBTQ+ community. Their platform includes proposals for a space in Carney and full-time position in the Dean of Students Office that would act as resources for LGBTQ+ students, along with the ability for students to enter their preferred name and gender pronouns on Agora Portal.

In one of their biggest proposals, Osaghae and Brooks declared support for the “Your UGBC Fund,” which allows students to submit a funding proposal for an event “that aims to uplift an issue, topic, or community,” in line with “UGBC’s mission as a student advocacy board.”

Both teams endorsed a “yes” vote on the upcoming non-binding referendum, “Should Boston College withhold investments from the fossil fuel industry?”

On issues of sustainability, Osaghae and Brooks went a step further, advocating for the construction of solar panels where possible—specifically naming McElroy Commons, Carney Hall, and McGuinn Hall—and the addition of rotating dish collection stations in all major dining halls.