Welcome back to our weekly round-up, where we recap everything that’s been going on in the past week of Boston College Athletics. With the spring sports season starting to ramp up, there are a lot of notable storylines to keep track of. Here are some of the things we saw last week:

The Skid Continues for Men’s Basketball

At halftime of Tuesday’s game against Duke in Cameron Indoor Stadium, it looked like the Eagles had a chance to shock the world by beating the Blue Devils for the second year in a row. BC held a 30-28 lead, and Duke had gone cold from deep, shooting just 1-of-15 from behind the arc in the first half. Any hope of an upset evaporated quickly after the break, though, as Duke rattled off eight quick points to begin the second half and never looked back, running away with an 80-55 victory. For more detailed analysis of the game, check out our notebook here.

The week didn’t get any better on Saturday against Syracuse in the Carrier Dome. Ky Bowman was benched to start due to a minor internal team issue, and in the five minutes he missed, the Eagles looked helpless, scoring just a single point and shooting 0-of-10 from the floor. When Bowman returned to the court, he gave the team a spark, finishing the game with a team-high 21 points, but it wasn’t enough. Despite a late 14-0 run that cut a 20-point deficit to six, BC dropped its fourth straight game, 67-56. For a more detailed recap of the game, check out our game story here.

Women’s Basketball Suffers Heartbreak, Then Gets Blown Out

Women’s basketball suffered through a winless week of its own, dropping contests to Virginia and Syracuse, albeit in very different ways. Against the Cavaliers, Makayla Dickens once again played a starring role for the Eagles, leading the team with 24 points. However, she also missed three free throws in the final two minutes, allowing Dominique Toussaint to send the game to overtime with two shots from the charity stripe with 19 seconds to play before UVA made all the correct plays in overtime to walk away with a tense 79-77 victory.

Against the Orange, however, there wasn’t much tension involved. Emma Guy scored a career-high 30 points, but against a hot-shooting Syracuse attack that knocked down 12 triples, the Eagles needed much more than that. The Orange built a 53-34 lead at halftime and cruised from there, handing BC a humbling 96-69 loss, its third straight.

Fresh off its first Beanpot victory since 2015-16, men’s hockey had a chance to keep the positive momentum going when it visited No. 15 Massachusetts Lowell Friday, and a solid defensive effort after one period had the teams scoreless going into the break. Unfortunately for BC, it lost focus midway through the second period, conceding three goals in the span of seven minutes to fall behind, 3-0. It didn’t help that River Hawks goaltender Tyler Wall was unbeatable on the night, saving all 28 shots he faced en route to a shutout. It definitely was not the result the Eagles were looking for heading into the Beanpot championship, but if you’re looking for an in-depth summary, check out our game recap here

The Eagles had quite the response to an unexpected loss to Harvard in the Beanpot semifinals, as they demolished New Hampshire, 7-1, on Friday. Delaney Belinskas opened the scoring just seven minutes into the game, Megan Keller continued her fantastic season and strengthened her case for the Patty Kazmaier award with two goals and two assists, and Kelly Pickreign earned her first career win, making 18 saves.

Men’s and Women’s Tennis Both Pick Up Wins

It’s been an excellent start to the season for women’s tennis, which moved to a perfect 9-0 on the season after emphatic victories over Boston University and Rhode Island this past weekend. The Eagles lost a total of one match across the two encounters and went a perfect 6-0 in doubles matchups against the Rams and Terriers. For a weekend summary of the two matches, click here.

Meanwhile, men’s tennis finished the weekend off strong, sweeping Merrimack to go .500 for the week after a 7-0 loss to Virginia on Friday. Derek Austin rebounded from his first loss of the season at the number one singles spot by moving to the number one doubles spot and earning a 6-3 victory with Sean Mullins against the Warriors’ Denis Davydov and Alex Fedorov.

Lacrosse Kicks Off the Season the Right Way

The Eagles were ranked No. 1 in the Inside Lacrosse preseason poll, and they certainly looked the part in their first game of the season against BU. Kenzie Kent opened the scoring just 24 seconds in, and BC never looked back, rolling to a 20-6 win against an overmatched Terriers team. In her return to the lacrosse field, Kent notched nine points, while Cara Urbank chipped in four goal, and reigning Tewaaraton Award winner Sam Apuzzo added three goals and one assist. BC appears to already be firing on all cylinders. If you want to read more about the Eagles’ season opener, click here.

Once again, Texas was unfriendly to a BC team, but this time it was softball that fell victim. The Eagles kicked off their season with four tough tests against the Texas (twice), Northwestern St., and Boise State, and failed to win any, giving up eight or more runs in each contest while scoring more than once in just one game. Without the star duo of Jessica Dreswick and Allyson Frei pitching, it looks like BC will have to find a way to score more runs if it hopes to reach 30 wins for the fourth consecutive year.

Moment of the Week: Women’s lacrosse opened its season by blowing out BU.

Notching a win against a Boston rival, and in dominant fashion no less, has to be the best thing that happened in the world of BC Athletics this week. What’s more, it looks like the Eagles’ vaunted attack is already in national championship-contending form.

Stat of the Week: Tuesday’s semifinal loss breaks a streak of six consecutive appearances in the Beanpot final for women’s hockey, dating back to 2012. Since then, the Eagles took home four of the last six trophies.

Men’s basketball returns home for two contests against Pittsburgh and Miami, while women’s basketball has a lone game—also at home—versus Clemson on Saturday. Men’s hockey has a home-and-home series against No. 1 Massachusetts while women’s hockey takes on Maine in a return to Hockey East action after the Beanpot consolation game against Northeastern Tuesday. As the spring sports season ramps up, softball participates in the ACC/B1G challenge with four games this weekend, lacrosse has its conference test of the season at Syracuse on Saturday, men’s tennis takes on Brown and Louisville, while women’s tennis plays UVA Saturday morning. 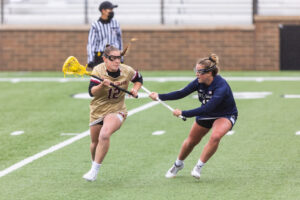