Home » Despite McPhee’s Two Goals, BC Swept by Massachusetts 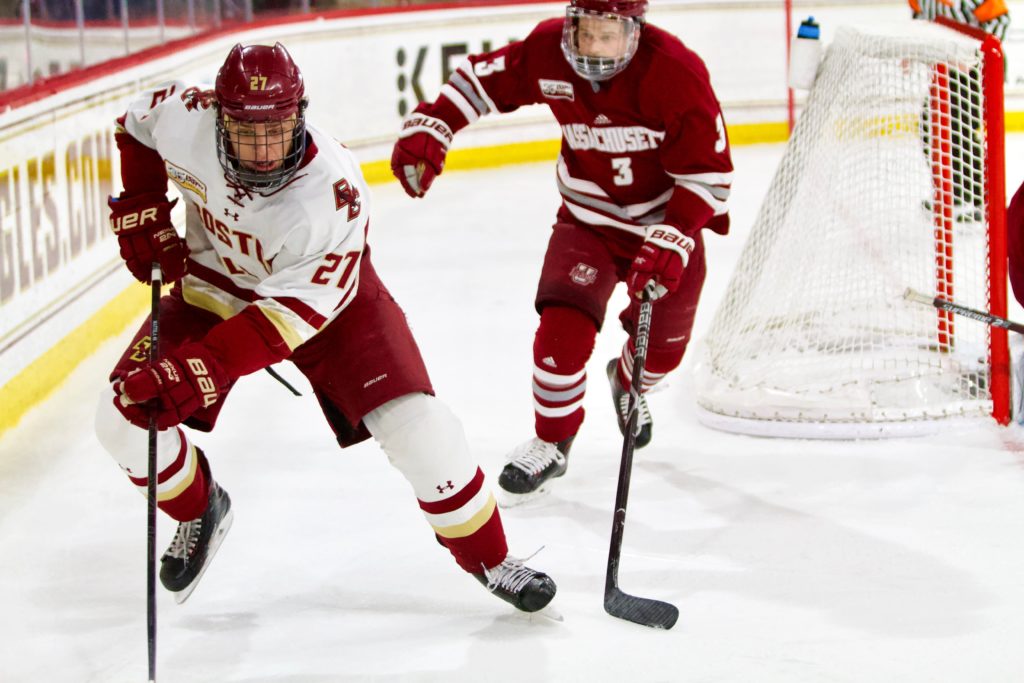 Despite McPhee’s Two Goals, BC Swept by Massachusetts

Friday night against No. 3 Massachusetts, Boston College men’s hockey enjoyed the dream start. Casey Fitzgerald found the back of the net with a blast from the right wing, Connor Moore doubled the advantage on the power play, and BC snatched a 2-0 lead just 17 minutes into the game.

Come Saturday, the story was much the same. With 11 minutes played at Conte Forum, Christopher Brown picked up the puck between blue lines, and skated into the offensive zone before dropping the puck off to Graham McPhee. The junior forward used Brown as a screen to drift down into the left circle, before wristing a drive low inside the right post to give the Eagles a 1-0 lead. Like Friday, though, BC simply couldn’t maintain the advantage. The Minutemen struck three times in the second period, twice on the power play, and again held off a late Eagles comeback to win, 4-2.

The tenor of the game quickly turned physical, with hits flying in on both sides. One particularly nasty collision ended with Jack McBain in the box for elbowing, and Luke McInnis with hands and knees on the ice due to a hit that came just as the whistle sounded. The physical play afforded the Minutemen their first penalty of the game and a good chance to go ahead—UMass entered the game with a power play percentage of 30.1, best in Hockey East. On their first power play, however, the Minutemen couldn’t even set up a cohesive attack in the offensive zone, generating zero shots on goal, and turning the puck over in between blue lines. That would soon change.

After heading into the first intermission trailing after McPhee’s tally, UMass struck with vengeance to open the second period. Helped by McBain’s second penalty, which came late in the first period, the Minutemen brought the puck into the offensive zone before John Leonard let fly a shot attempt fly from the right circle that Joseph Woll managed to redirect out toward the left goal line. Jacob Pritchard gained possession and sent a hard pass right back into the slot, where Leonard redeemed his miss from seconds prior with a tap-in past Woll. Just over one minute in the frame, the game was tied.

Not even 60 seconds later, the Eagles found themselves staring at a deficit. Oliver Wahlstrom was sent to the box for boarding in front of the BC bench four seconds after UMass’s tying tally, and the Minutemen used their stellar power play to capitalize again. Jake Gaudet won a faceoff in the the Eagles’ defensive zone, and the puck fell to the stick of Oliver Chau just outside the crease. The sophomore left wing pivoted before roofing a shot over Woll’s shoulder pad to give UMass the lead.

BC looked lost and chose to use its physicality to try and get back in the contest. Little scrums started popping up after every whistle, and things came to a head with 7:21 gone in the frame, as Colin Felix, Jake McLaughlin, J.D. Dudek, and McPhee were all simultaneously sent to the box after a fight behind the UMass net.

The hits didn’t turn into chances for BC, though, and instead it was the Minutemen who once again scored off a face off in the right offensive circle. Aapeli Räsänen won the draw, but the Eagles weren’t able to get the puck clear, and it squirted out to Pritchard on the right wing. The senior turned before sending a high shot that slid just in between Woll’s glove and the right post for a 3-1 Minutemen advantage.

UMass’s speed seemed to be too much for BC to handle 5-on-5, so the Eagles turned to the power play to get back in the game. Bobby Trivigno was whistled for interference, and BC managed to set up on the power play in the offensive zone. Brown dropped the puck below the goal line for Dudek, who waited a second before sneaking a pass to McPhee between two Minutemen defenders. The Las Vegas Golden Knights prospect didn’t hesitate, slapping a shot past Murray for his second tally of the game. After notching just five points in his first 20 games this season, McPhee has picked things up of late, recording two goals and two assists in the past six contests.

“His overall game has improved, and his goalscoring is coming with it,” head coach Jerry York said after the game. “I think he’s on his way back up to becoming the player we all thought he would be.”

From there, perhaps sensing a possible BC rally, UMass played solid defensive hockey, managing to put bodies in front of net, winning battles on the defensive boards, and forechecking to prevent clean buildup in the offensive zone. The defensive play made it hard to create chances, but the Eagles still came inches from equalizing, as McLaughlin cleared the puck off the goal line with Murray out of position to keep the BC deficit at one heading into the final frame.

Chances continued to be scarce in the third period, but the Eagles had a good chance to equalize during a four-minute span with just under 17 minutes to play. First, Anthony Del Gaizo was penalized for interference before Trivigno served a two-minute minor for tripping, giving the Eagles nearly four minutes with a one-man advantage and 20 seconds of 5-on-3 skating, but couldn’t win the initial face off to maximize the opportunity.

Even so, the double penalties gave BC an extended period of possession in the offensive zone, and Brown and David Cotton forced Murray into a pair of saves, but the Eagles weren’t able to score. It was a missed chance that BC would end up regretting heavily. The Minutemen continued to be impenetrable on the defensive end, limiting the Eagles to just four shots on goal the rest of the way, and sealing the win with an empty-net scoring play from Gaudet with 19 seconds to play.

The loss marks three straight games in which the Eagles have stayed within striking distance of a ranked team for the entirety of the contest, but simply haven’t been able to secure a victory. This stretch has been perhaps the starkest example of BC’s biggest problem this year: The Eagles simply don’t put the puck in the net enough. BC scores just 2.3 goals per game, third-worst in Hockey East, and has just one player (Cotton) with over 10 goals. Until the Eagles address that weakness, these close losses will continue to occur, and BC’s chances of making a postseason run will shrink to nearly zero. 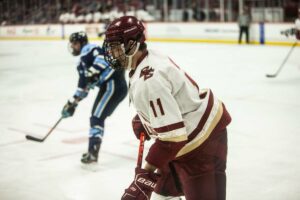 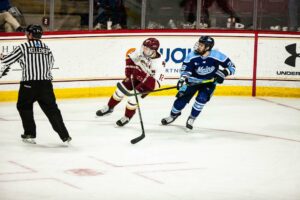 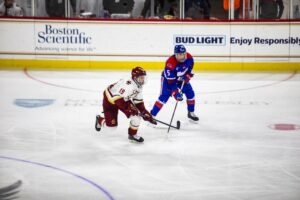