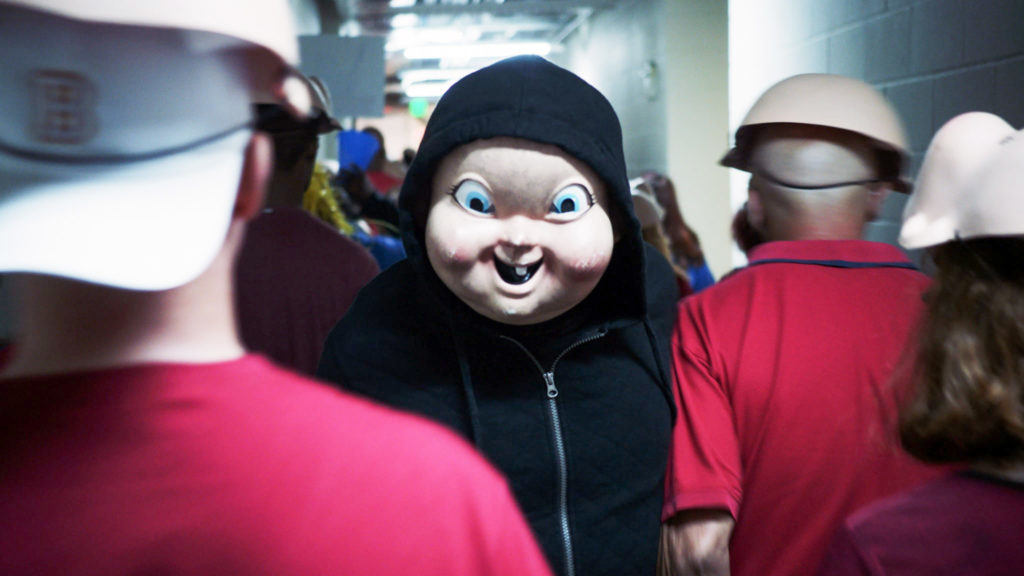 Christopher Landon’s new movie Happy Death Day 2U, a sequel to 2017’s Happy Death Day, manages to break through cliché and convoluted plotlines to offer a somewhat enjoyable viewing experience. The sequel struggles on two fronts: its reliance on exhausted horror movie conventions and a concept that is almost identical to that of its predecessor. Jessica Rothe’s lead performance and the genuine humor that made the first movie so refreshing, however, are Happy Death Day 2U’s saving grace.

In order to properly enjoy Happy Death Day 2U, it would be best not to watch it as a standalone. Although there is a short recap of the first movie early on, actually knowing the context makes the sequel more impressive, as every aspect of the first movie is meticulously recreated throughout the second. The film begins by following Ryan (Phi Vu) to the quantum mechanics lab, where he and his two partners are working on a machine that will be able to slow time. The dean of students soon barges in, complaining about the power outages the machine is causing on campus and decides to take it away.

It is here that he begins to receive pictures of himself in rooms where he believes to be alone. Ryan follows the supposed origin of these photos and is soon murdered. He then wakes up in his car, indicating that he is stuck in the same time loop that Tree (Jessica Rothe) was in the first movie. He almost immediately enlists the help of Carter (Israel Broussard), his roommate, and Tree, as she immediately recognizes what he is experiencing. Together, they track down the murderer, who ends up being a shocking culprit from another dimension. In the next scene, Tree wakes up on the day of her birthday, mirroring the events of the last movie.

Somehow, Landon manages to fit all of this in the first 15 minutes of the move—and if this sounds complicated, it’s because it is. The first 15 minutes of the movie are crowded with complex science, and Ryan’s irrelevant plotline is sandwiched in as an almost reverse deus ex machina, an all too convenient explanation for the events that unfold in the rest of the movie. It is soon uncovered that Tree is stuck in the day she is meant to die, yet again, but in a different dimension.

In this one, she is not dating Carter, but her mother (Missy Yager), who in the other dimension died three years previously, is alive. Unlike the first movie, this presents a more interesting dilemma. Although she is still hunting for her killer, the real issue is whether she will return to her original dimension or remain in a life that is not really her own, but with her mother.

She initially decides to remain in the new timeline in order to be with her mother. However, to remain, there are technical obstacles Tree must overcome. This is not so simple, as a bug in the coding of the faulty time machine could take weeks to track down. The only solution to this problem is Tree—she is the only character who retains memories from every loop reset. She then has to memorize algorithms and lines of code. Instead of being murdered to reset the loop—as she is in the first movie—she finds new and inventive ways to kill herself in a sequence that is definitely one of the more successful bits of the movie.

Most scenes, jokes, and scientific principles are trite and decisively make Happy Death Day 2U a less lively watch than the original. Additionally, the expansion and then immediate abandonment of Ryan’s storyline reveals a lack of continuity that makes it feel as if the director wasted 20 minutes that could be used for additional depth in a more relevant storyline. For those who found Happy Death Day to be lively and entertaining, the second installment breathes—albeit feebly—new life into the captivating plotline.