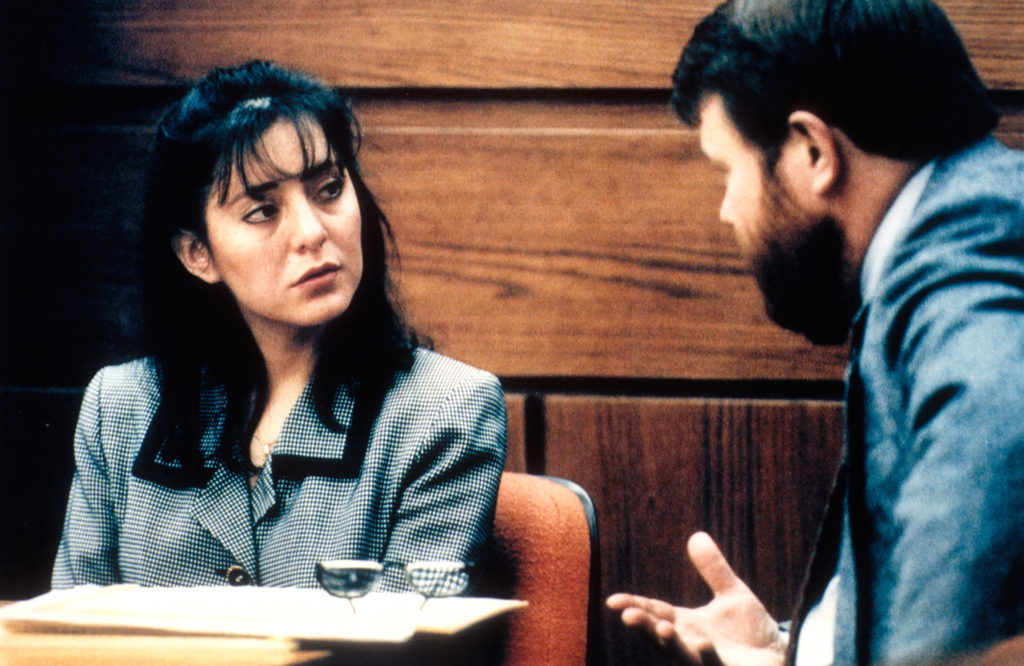 Lorena, the true-crime docuseries, stakes its claim on the idea that it will finally tell the other side of the story. Instead of the media circus of tabloid journalism that defined the Bobbitt case in the early ’90s, Lorena would take a clearer look at the incident. But more than that, it would explain the cycle of abuse that drove this crime.

Yet, for the first 10 minutes, we don’t hear Lorena speak. And when we do finally hear her, it’s a recording from 25 years ago. Meanwhile, Lorena has played clips of comedy specials in which Steve Harvey cracks jokes right to her face. The audience has heard modern testimony from lawyers and basically had a sit-down conversation with her abuser, John Wayne Bobbitt, in his current home—watching him smile, chuckle, and make overt innuendo to the incident.

And this is the case for most of the four episodes that comprise Lorena. The woman herself, Lorena Bobbitt, is lost in the four hours of content. The series dedicated to this story has no qualms about taking a deep dive into the compelling story, but Lorena forgets its titular character.

For all of that, Lorena does tells its viewers what happened. Late one night, Lorena took a knife and cut off her husband’s penis. He went to the hospital, she threw the severed organ into some grass on the side of the road. Authorities recovered his penis, doctors reattached it, and since then it has worked tolerably well by all accounts. But Lorena dwells on these moments and on the subsequent trials for so long that it takes hours for the show to really discuss why.

Why did Lorena do this? For a long time, Lorena tells us what we already know. Lorena claimed that she had been assaulted, harassed, and abused—verbally, physically, and sexually—for a very long time by her husband. She then took steps to ensure that it would never happen again. If we know anything about the story aside from the penis incident, we know this.

It isn’t until more than halfway through the show that Lorena lays out more and more evidence against John Wayne. The show takes too long to tell us that her testimony could be corroborated by others, that John Wayne had come from an abusive household—in which his father would abuse and molest his mother, his siblings, and himself—and that other women (including his later wives) also experienced this kind of treatment.

The miniseries wants to have its cake and eat it too. It decries the tabloid journalism and comedic horse beating that followed the case, and at the same time shows us “funny” clips of Bobbitt and other lawyers talking about the issue. It cartoonifies John and others, and at the same time attempts to champion spots from important figures in feminism and the rights of battered women. It wants to finally give Lorena her due. And it walks all over her.

If the goal is a clear-eyed look at the case, or even an understanding of the events with a modern perspective (in light of the #MeToo movement, the Women’s March, the Brett Kavanaugh hearings, and all of the other modern moments that Lorena alludes to), then Lorena is not the one to do it. It draws the story out to be nearly paper-thin at times. It changes tone and perspective too often, and in attempting to be serious, often plays up the drama.

That said, there are certainly compelling parts to the show. Lorena deftly presents the tension between sexes at the time—a country-wide discussion that divided the thoughts and feelings of men and women. Many men interviewed felt angry, uncomfortable, and afraid—that this was the worst thing that could ever happen to a man, perhaps worse than death. Women interviewed felt that it wasn’t as big a deal as everyone was making it out to be, or that perhaps it was finally time for men to feel what women had always felt. Through dozens of news clips, past footage, and present-day interviews, Lorena sketches a picture of a man’s world and the struggle of women to exist in it without fear.

As such, Lorena is quite disturbing at times. The lives of two people exploded, and the country watched with rapt attention. People bought shirts, Saturday Night Live did skits, and celebrity personalities played it for laughs. But amid this, we watch Lorena quietly struggle to pick up the pieces and build a new life.

Lorena wants to teach viewers a lesson about sexual assault, domestic violence, and its portrayal in the media. But it doesn’t feel big enough to tackle this issue. And at this point, nothing does. Lorena poignantly alludes to all of the monumental achievements in women’s rights that have been made since then and then turns around and tells us that nothing has really changed. And it’s probably right. At the end of the show, Lorena plays a clip of Air Force Amy, an escort at the Bunny Ranch where John Wayne worked after the trial. She puts it bluntly and truthfully, indicative of the world and of the abuse that Lorena suffered: “They can cut a million clits off in Africa and no one says a word, but you cut one dick off—the country stops.”

lorena
‘Dinner and Diatribes,’ ‘Please Me,’ and More in New Singles
‘Everybody Knows’ Comes Across as a Soapy Thriller