Home » Please Capitalise the “B” in Black 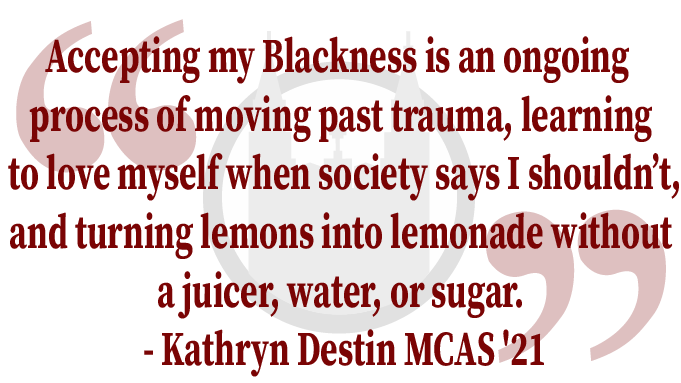 Please Capitalise the “B” in Black

Please refrain from identifying me as a minority, it doesn’t make you informed.

You can refer to me as what I identify as … Black. Emphasis on the B.

I am Black. But to be entirely honest, even I’m not sure what that means.

If you look up “black” on dictionary.com, the first definition you’ll see listed is “lacking hue and brightness; absorbing light without reflecting any of the rays composing it.” Well, I am 99 percent sure we don’t describe people like that. Rather, we tend to use other adjectives, one-word descriptors, or a phrase, like “nice” or “funny” or “great smile.”

Sometimes, when we want to further emphasize a specific characteristic about a person, we might use other synonyms. For example, in addition to saying someone is “nice,” we might say they’re “kind,” too. So maybe the first definition of black as an adjective isn’t great, but looking up synonyms might help.

If you look up “black” on thesaurus.com, you’ll find a surplus of words like “dark,” “charcoal,” or “jet,” but you’ll also find “dirty,” “hopeless,” and yes, “evil.” From a purely linguistic perspective, these are perfect words to replace the “black” in your piece for your Writing Workshop: Flash Fiction course. However, I’d like to believe you wouldn’t use these words as replacements for Black when talking about people. But I know this wasn’t always the case. The linguistic and definitive associations of black and blackness with words, such as “dirty,” “hopeless,” and “evil” have been the very foundation of an oppression against Black folks across the globe, particularly in America, and yes, even Boston College.

Think about it. Historically, Black people were viewed as inhuman beasts. This mindset was blatantly depicted during the silent film era of the early 20th century. For example, Birth of a Nation, released in 1913, portrayed a Black man as a predator who posed a threat to whiteness. During the reign of Jim Crow that some of my mentors and family members lived through, it was a compliment to be called a “negro” or “boy” because at least it wasn’t the n-word. And now, as I walk the halls of a university established two years before slavery was unconstitutional, I am alarmed by pictures of racist snapchats and anti-Black vandalism. For some reason, I still proudly claim this history, despite the pain, humiliation, and tragedy.

I am Black. But to be entirely honest, I couldn’t care less what it’s defined as, because I know the greatness Blackness entails.

Being Black ain’t easy, but I wouldn’t have it any other way. Why? Because when my ancestors were forced to convert to Christianity after being labeled as “heathens,” they created stories which turned into beautiful hymns and spirituals. Now, I sing along and recite the lyrical masterpieces of hip-hop, R&B, and rap that stem from these soulful roots.

When my female ancestors weren’t at the beck and call of Massa, they plotted their escape by braiding their hair into maps so they could know the route north. Now, I cornrow my hair to claim freedom from the beauty standards that tell me to hate my natural hair.  When my ancestors weren’t allowed into universities, they developed their own academic institutions. Now, I read books written by historically black college and university alumni in a university they would have never imagined attending 100 years ago.

Accepting my Blackness is an ongoing process of moving past trauma, learning to love myself when society says I shouldn’t, and turning lemons into lemonade without a juicer, water, or sugar.

I am Black, and I am proud.