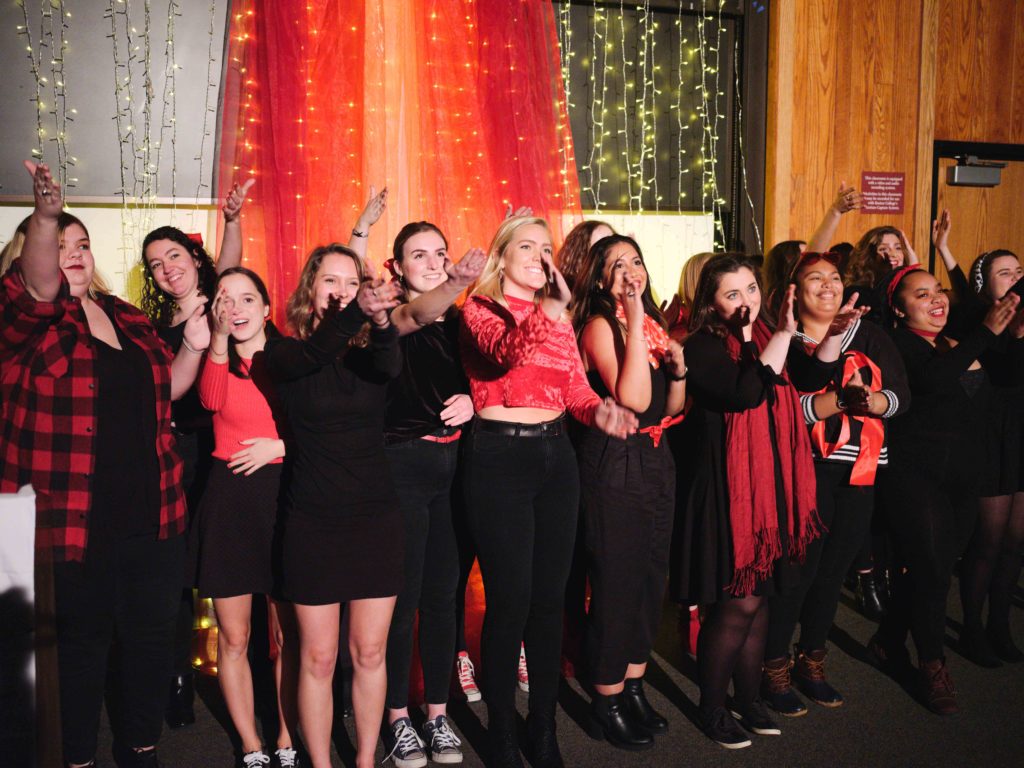 “If your vagina got dressed, what would it wear?” asked the performers of The Vagina Monologues.

The series of skits was performed by 29 women telling 19 different stories, focused around, well, vaginas. The play, written by Eve Ensler in 1996, was directed at Boston College by Michaela Chipman, MCAS ’19, and assistant director Anabel Johnson, MCAS ’20. The piece of comedy struck a funny tone, but also pointed out the discriminatory double-standards to which women and their vaginas are subject.

“Hair,” a skit performed by Bernadette Charland, LSOE ’19, featured a recent divorcée’s struggles with her ex-husband. While she was expected to change to suit her husband’s wants in their uncomfortable sex life, her ex was not ready to reciprocate. With wine glass in hand, Charland relied on the classic wine-mom stereotype to make the conversation feel as if the performance was just another Wine Down Wednesday night talk. Her impression of her German therapist was particularly memorable.

Cassie Pearson, MCAS ’20, produced a fabulous New York accent for her skit, “The Flood.” She told an older woman’s story that had concluded long ago: After an adroit date, her sex life had reached its end. After being made to feel embarrassed about her body by her date—who apparently was very handsome—she never again even talked about her sex life, let alone participated in it. At the age of 74, she confessed to the audience that she had never truly told anyone the real story of why she remained single.

The “They Beat the Girl Out of My Boy” skit featured the story of a transgender woman throughout the course of her transition. Samantha Ricci, MCAS ’20; Elyse Gaertner, MCAS ’21; Julia Barrett, MCAS ’19; Hailey Burgess, MCAS ’19; and Debbie Aboada, MCAS ’21, provided the different voices of the woman. There were cheers in the room when the voices announced that, despite initial pushback, it had in fact been the woman’s military father who had paid for her sex reassignment surgery.

“My Vagina Was My Village” was the tearful skit of the night. Chipman performed the story of a Bosnian woman in the early 1990s. Thousands of women across Yugoslavia were violently raped during the genocide that tore through the Eastern-European nation. A crying Chipman, assuming the role of a rape victim, told the audience that she felt like her body was no longer hers, as if it had been taken from her by soldiers and become foreign object over which she no longer felt ownership.

By the end of the night, the audience had gone from nearly crying because of laughter to almost shedding tears over tough stories like Chipman’s.

In keeping with the theme of celebrating women and bringing attention to women’s issues, 90 percent of the ticket proceeds were donated to Rosie’s Place, a women’s shelter in Boston that services more than 12,000 local women.
Once again, The Vagina Monologues opened up an often touchy conversation about struggles—ranging from body image to rape—too often encountered by women on and off campus, but also stimulated a discourse that encouraged women of all backgrounds to celebrate their shared identity.

the vagina monologues
Convoluted Storyline Bogs Down ‘Happy Death Day 2U’
Ken Jeong Riffs Off Romance in ‘You Complete Me, Ho’