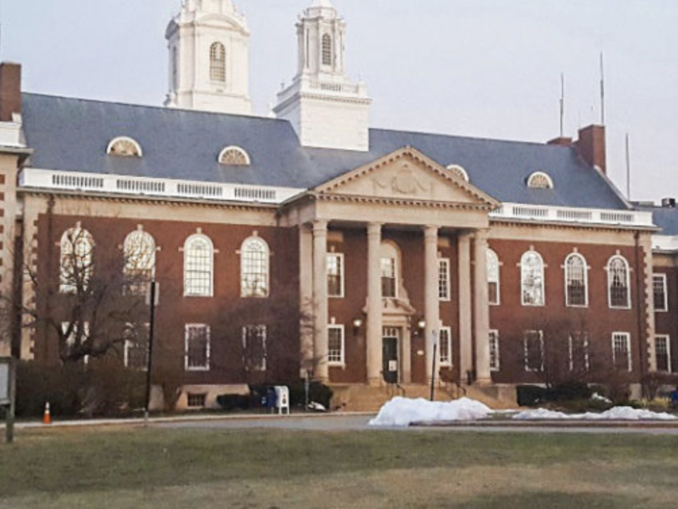 Newton Plans to Stamp Poems into Sidewalks with Latest Campaign

Soon, the sidewalks of Newton will be marked by more than just snowy footprints.

Earlier this month, the City of Newton launched its latest campaign, “Make Poetry Concrete,” a pilot program that plans to stamp 10 poems into the sidewalks throughout Newton.

The project was inspired by Newton resident and artist Grey Held, who came up with the idea to bring art to the community when a sidewalk near his home was being redone. Held saw the construction as an opportunity to engage his neighborhood, and reached out to the city with the idea of adding a poem to the sidewalk.

“The vision Grey brought forward to us was really exciting, and the project was born out of our first conversations about a year and a half ago,” said Lily Reynolds, community engagement manager for the City of Newton. “Grey is a poet, so he really looks at things from that perspective, and wanted to find a way for poetry to not just be found inside a book but outside in the public.”

“Make Poetry Concrete” seeks to bring art and literature into the daily experience of living and walking in Newton, as well as celebrate the creativity of the community.

Newton residents of all ages are encouraged to submit their own works to be cast in concrete, and the contest is open to residents of the greater Boston area as well. Applications must be submitted to the City of Newton by April 15.

In addition to promoting art and literature, the project also hopes to stimulate economic growth. The exact locations of the poems have not yet been decided, but Reynolds said that areas with high levels of foot traffic will take priority—particularly around local businesses. Potential locations range from village centers, to in front of public schools, local businesses, public parks, and transit stations.

Funding for “Make Poetry Concrete” comes from MassDevelopment, the state’s finance and economic development agency. MassDevelopment works with businesses, nonprofits, financial institutions, and communities across the Commonwealth, and has partnered with Newton to strengthen the community through prose.

“Because this is a sort of a new type of pilot program and not a core service of the city, we wanted to find a way that we could do the project with support from another funder, and MassDevelopment is perfect, particularly given its dedication to placemaking,” said Reynolds.

Placemaking is a unique approach to the planning, design, and management of public spaces.

“It transforms usually ordinary elements of the public realm, like sidewalks, into something unique and exciting, and that is our goal for this project,” Reynolds said.

The partnership with MassDevelopment provides a grant that will cover half the funds for the project, but on the condition that the other half is raised from the community. The total budget for the project is $15,000, and “Make Poetry Concrete” set a goal to raise $7,500 by March 29 to kickstart the process.

For the fundraising process, “Make Poetry Concrete” partnered with Patroncity, a civic crowdfunding platform, and donations can be made directly on the organization’s website.

With the deadline quickly approaching, Reynolds said that the community organizers are working hard to meet the fundraising goal.

“What I hope the community takes away is that together it is possible to take a sidewalk, something that is an everyday piece of the city that we live in, and turn it into something more meaningful and more beautiful,” said Reynolds. “I can’t wait for this project to come to life.”