Home » Despite Second Half Rally, Eagles Fall to N.C. State in Overtime 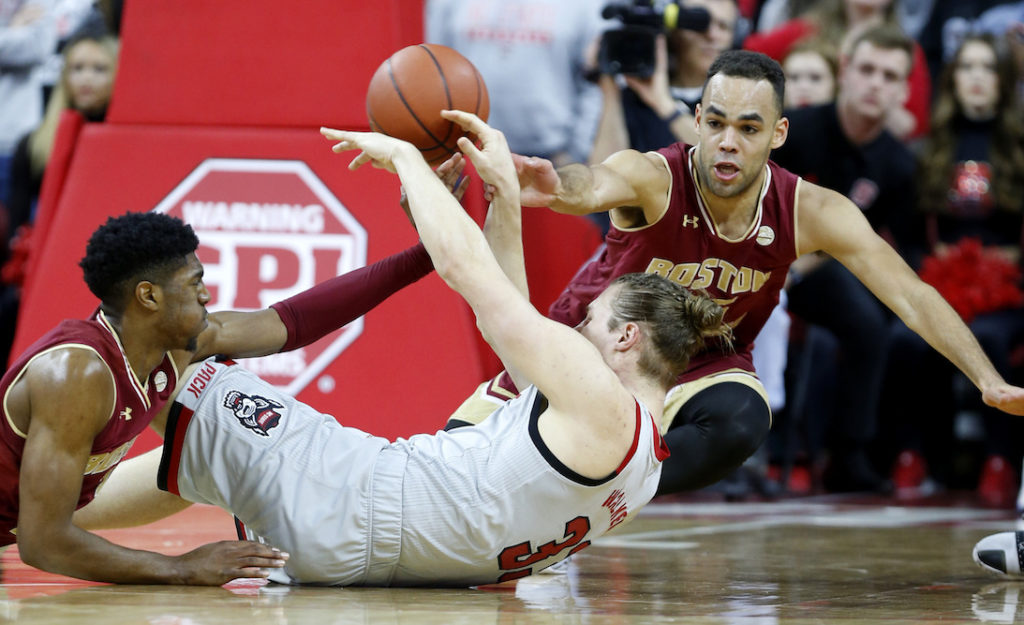 Despite Second Half Rally, Eagles Fall to N.C. State in Overtime

With 23 seconds to play against North Carolina State, Boston College men’s basketball had a golden opportunity. After Devon Daniels missed a layup, Steffon Mitchell pulled down the defensive rebound with the score tied at 73, and the Eagles had a chance to steal an important conference win on the road.

It was a chance that went to waste in spectacular fashion. After little to no movement on the offensive end, Ky Bowman—who played hero with an improbable 3-pointer against Wake Forest that ultimately gave BC its sole conference road win of the season thus far—heaved up another off-balance shot from beyond the arc as time expired. This time, it bounced high off the rim and sent the game into overtime. In the extra period, N.C. State kicked things off with a 7-0 run and never looked back, pulling away for an 89-80 victory.

In the beginning, the game quickly became a long-range shootout. Wolfpack (19-8, 7-7 Atlantic Coast) point guard Braxton Beverly—who lit up the Eagles (13-12, 4-9) to the tune of five first-half 3-pointers when the two teams met in Raleigh last year—looked poised for a repeat performance, knocking down three shots from behind the arc in the first six minutes to try and ignite the Wolfpack offense. Luckily for the Eagles, they had a prolific shooter of their own in Jordan Chatman to answer. Chatman scored 12 of BC’s first 15 points—all from behind the arc—to help BC keep pace early before Jairus Hamilton stepped up. The freshman drained a triple of his own before getting into the paint for two more baskets for seven quick points. The only problem was, no other Eagles player seemed capable of scoring.

Hamilton and Chatman—the latter of which eventually left the game just before halftime and didn’t return due to a nagging finger injury—were the only two BC players in the first 12 minutes to record a basket. Meanwhile, six different N.C. State players scored, helping the Wolfpack build a 29-21 lead with eight minutes left in the opening frame. Jared Hamilton finally popped up with a pair of mid-range jumpers before Bowman nabbed four quick points of his own, but the Eagles weren’t effectively defending the 3-point line, and it hurt them in a big way.

The Wolfpack shot a scorching-hot 7-of-13 from distance in the first period, and back-to-back 3-pointers from Daniels and Beverly gave N.C. State its largest lead of the game at 46-34. Bowman sunk an acrobatic shot to narrow the deficit to 46-37 going into halftime, but the momentum was firmly in the hosts’ hands.

The Wolfpack utilized a full-court press for much of the first half to disrupt BC’s offensive rhythm, and it didn’t let up in the second half. It continued to force turnovers and create transition baskets in the second period, eventually extending the Wolfpack lead to 14 points with 12:58 to play. The Eagles looked worn out, but the combination of Bowman and Nik Popovic, who have been the team’s best offensive threats all season long, stepped up again when needed.

Popovic—who scored all 18 of his points in the second half—stepped into a mid-range jumper, then rolled to the basket for a dunk off a pretty pass from Bowman to narrow the deficit to 64-60. Then it was Bowman’s turn: The guard nailed back-to-back 3-pointers from the top of the key to cap a 15-0 BC run, giving the Eagles the lead for the first time in the second period at 66-64 with 7:15 to play.

From there, what had been a free-flowing offensive game suddenly ground to a halt. The teams combined for just four total points over the next four minutes, and it was telling that the Eagles’ best offense down the stretch was Mitchell and his offensive rebounding. The sophomore forward, who finished with a team-high 13 boards, ripped down a rebound and banked a put-back off the glass. He didn’t let up, grabbing another offensive rebound before being fouled and knocking down two free throws to give BC a slim 71-70 advantage with 2:30 to play.

The Eagles would not score again, though, until a clutch jumper from Jairus Hamilton gave them a 73-72 lead with 51 seconds to play—setting the stage for a wild finish. On the ensuing N.C. State possession, Torin Dorn was fouled by Mitchell before making the first free throw and missing the second. Daniels came up with a huge offensive board on the miss and could have held for the last shot, but chose to take an ill-advised reverse layup instead. It was a mistake that could have cost the Wolfpack the game.

Instead, Bowman missed at the end of regulation, and N.C. State owned overtime. C.J. Bryce started the extra period with a three-point play, Daniels slashed into the lane for a basket, and Dorn kissed a shot off the glass for an 80-73 lead. Popovic responded with a tough left-handed hook shot, but Daniels redeemed himself further with an open shot from behind the arc on the right wing, and BC never threatened again.

The 15-0 Eagles run that gave them the lead in the second half is eerily reminiscent of a 14-0 second-half scoring flurry against Syracuse 11 days ago, and just another reminder of how frustrating this season has been for BC.

At times, such as the second half against the Wolfpack, the Eagles look capable of competing for a spot in the top half of the ACC. But then a period of play like Wednesday’s overtime sequence—where execution and effort on both ends were lacking—comes, and it looks like BC is the worst team in the conference. It’s inexplicable and one of the biggest reasons why the Eagles find themselves just barely above .500. This team simply lacks any sort of consistency, and until BC finds it, disappointing performances from a team that’s more talented than its 13-12 record indicates should not be surprising, but expected.