There was no dramatic comeback for Duke this time, especially with Zion Williamson out with an early injury. The Blue Devils weren’t able to mount a repeat of their stunning rally at Louisville against North Carolina, and instead lost in blowout fashion to their biggest rival. A statement win for the Tar Heels means a mix-up at the top of the ACC Power Rankings, with the regular season coming to a close.

Despite the obvious caveat—Williamson’s injury came just 36 seconds into the game—in the Tar Heels’ win over Duke at Cameron Indoor Stadium, the fact remains: UNC didn’t play that well and still won by 16. The Tar Heels shot a paltry 2-of-20 from downtown, turned the ball over 15 times, and yet were up by double digits for the entirety of the second half. With a dynamic cast of scorers—six different players average at least eight points per game—that are more than willing to share the ball, it’s clear that UNC has the firepower to compete with any team in the country. Now all eyes turn toward a rematch against the Blue Devils in two weeks, where Williamson could be back and which could decide the ACC regular season title.

The Cavaliers just keep chugging along. Virginia limited both Notre Dame and Virginia Tech to less than 60 points in a pair of six-point wins, even holding the Hokies—who entered the game as the country’s third-best 3-point shooting team—to just 3-of-28 from behind the arc. The Cavaliers’ tendency to play close games (each of their last six has been decided by 10 points or less) will once again be a worry come the randomness of March, but for now UVA remains comfortably in contention for an ACC crown.

The Blue Devils’ nationally-televised encounter against the Tar Heels certainly didn’t go as planned. Duke lost Williamson to injury before even a minute had passed against UNC, and simply never recovered, shooting 34.7 percent from the field and looking out of sorts on defense the entire game. It remains to be seen how long the National Player of the Year contender will be out, but luckily Duke has only Miami and Wake Forest—two of the worst teams in the conference—on the schedule in the next two weeks. If Williamson returns this season, there’s no reason the Blue Devils shouldn’t still be considered a national title contender.

Talk about a dramatic turnaround. The last time the Seminoles tasted defeat was an 87-82 loss to Boston College on Jan. 20. In the month since, FSU has rattled off eight consecutive wins, and won on the road by double digits twice in the last week. The Seminoles don’t have a roster adorned with superstars, but they do have one of the deepest rotations in the country, with 10 players playing at least 10 minutes per game, and an offense and defense that rank inside the top 25 of KenPom’s efficiency ratings.

Is there a team in college basketball more confusing than the Orange? After a 73-58 defeat to North Carolina State on the road, Syracuse rebounded with a 20-point stomping of Louisville at the Carrier Dome on Wednesday. Jim Boeheim’s patented 2-3 zone is working its usual magic—the Orange allows the third-fewest points per game in the conference and features the 15th most efficient defense in the country—so if Syracuse is going to start a winning streak to end the season, it’ll have to come from an offense that’s magic number is 65. The Orange has yet to lose a conference game when it scores 65 or more points.

A golden opportunity went to waste for the Hokies, who trailed by just three points at halftime to No. 3 Virginia at home on Monday, but an off perimeter shooting night doomed VTech to its second loss to the Cavaliers this season. The Hokies are still missing floor leader Justin Robinson, but in his absence Kerry Blackshear has emerged as a go-to scoring option. The redshirt junior forward has hit double figures in scoring in each of the past six contests and led VTech with 23 in the loss to Virginia.

After reaching the No. 15 spot in the AP Poll just three weeks ago, the Cardinals have hit a bit of a rough spot, losing three of their past four games. The recent skid was capped by an ugly offensive effort at Syracuse in which Louisville shot just 25.9 percent from the floor and discombobulated all night. The Cardinals’ schedule doesn’t get any easier either: In their next game Virginia pays a visit to the KFC Yum! Center.

The Wolfpack certainly doesn’t lack for offense. With the 29th-most efficient offense in the country, N.C. State is also one of three ACC teams—along with UNC and Duke—to average over 80 points a game. It does so unselfishly, with 15.71 assists per game and a plethora of scorers, and used that unselfishness to hold off BC at home Wednesday, as five players reached double figures in scoring. The Wolfpack certainly needs to find some answers on defense—opponents have hit the 75-point mark in four of the past five contests—but in the meantime they’ll settle for being .500 in the ACC once again.

A four-game winning streak looked to have righted the ship for Clemson, but three losses in the past eight days, including brutal one-point defeats to both Miami and No. 18 Louisville, have sent the Tigers spiraling once again. It’s hard to know what to make of a team that has the 16th best defense and the 82nd best offense by KenPom standards, and yet could be 18-8 with a tournament-worthy resume if not for three one-possession defeats. For now, we’ll slot them in right where they are in the conference standings: ninth.

The Eagles continue to be maddeningly inconsistent, looking like a great team in a second-half rally against N.C. State before Ky Bowman missed a potential game-winning 3-pointer at the buzzer. BC was then outscored, 16-7, in overtime as a winnable road game slipped out of the Eagles’ hands. What’s more, injury concerns continue to plague BC, as Jordan Chatman left just before halftime against the Wolfpack due to a recurring finger injury.

A good way to describe the Yellow Jackets’ offense might be putrid. Jan. 9 was the last time GT scored more than 70 points. In fact, the Yellow Jackets haven’t even hit 50 points in three of the past six contests. GT’s scoring average of 65.2 points per game is worst in the conference by a wide margin, 3.5 points per contest to be precise. That contributed to a seven-game losing streak that was only snapped by a win Wednesday night against fellow ACC cellar-dweller Pittsburgh.

The Hurricanes looked exhausted down the stretch in a 64-57 loss to BC Sunday—due in large part to their decided lack of depth this season—but at least they’ll have had six days off before they take on GT on Saturday. Other than that, there’s not much to be optimistic about for a team that boasts one of the most entertaining players in the conference in Chris Lykes—who averages 16.5 points per contest—but possesses little behind him.

One of the most shocking wins of the conference season almost belonged to the Irish, who trailed just 54-52 with 35 seconds to play against UVA in Charlottesville but couldn’t find one more big defensive play to pull off a huge upset. Instead, Notre Dame dropped to 1-10 in the ACC against opponents not named BC, and to make matters worse proceeded to lose to Wake Forest at home Tuesday. At least T.J. Gibbs has shaken off a slow start—the junior is averaging 20 points per game over the past three contests.

Despite how bad the Demon Deacons have looked on both ends at times this season—they rank outside the top 150 in both offensive and defensive efficiency, per KenPom—Tuesday’s win over Notre Dame demonstrated that Wake Forest still has some talent. Brandon Childress scored 20 points in the victory, while freshman Jaylen Hoard continues to excel. Even so, the Demon Deacons remain close to the bottom of the conference, and with little besides Childress and Hoard to rely on consistently, aren’t likely to make any significant moves before the season ends.

The futility continues for the Panthers, who have now lost 10 straight contests after a 73-65 defeat to GT on Wednesday. The youth of Pittsburgh has been well-documented this season, and the future is still bright under new head coach Jeff Capel, but for now the Panthers continue to look too inexperienced to truly be competitive in the ACC. 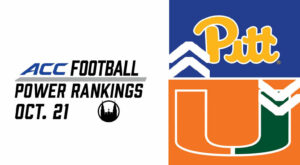