Home » BC Allows 90-Plus Points for Fourth Straight Game, Falls to UNC 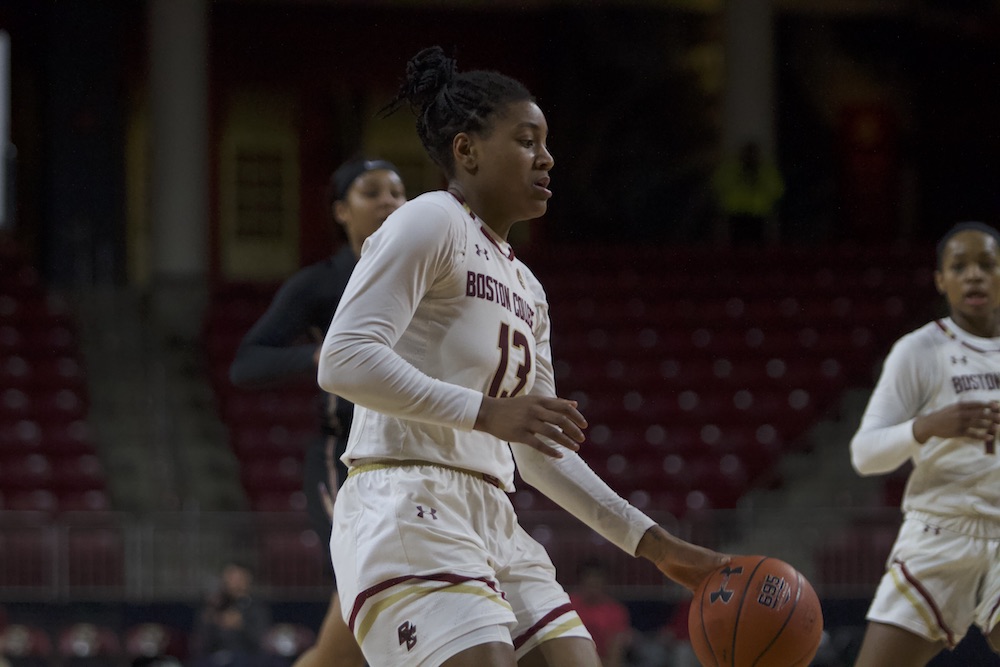 BC Allows 90-Plus Points for Fourth Straight Game, Falls to UNC

Last season, Boston College women’s basketball held its opponent under 90 points in every single game. While this team has nearly doubled the win total of last year’s squad, Thursday marks the fourth consecutive contest in which it has allowed more than 90 points. The beneficiaries—Syracuse, Notre Dame, Clemson, and North Carolina—all rode hot shooting and open looks past a BC team that has now dropped nine of its last 10 games.

On Thursday night, the offensive outburst by UNC was led by Janelle Bailey and Paris Kea, who led all scorers with 31 and 25 points, respectively, en route to the  93-78 Tar Heel victory. Kea also tallied eight assists while Bailey added seven rebounds. Another meaningful contribution was made by Taylor Koenen, who grabbed 15 boards from the guard spot along with 11 points of her own. All the more impressive, the Tar Heels (17-11, 8-6 Atlantic Coast) controlled this game wire-to-wire without the strength of their 16 points-per-game scorer Stephanie Watts.

For BC (14-13, 3-11), turnovers and a lackluster defensive effort resulted in the loss. An off night from beyond the arc also prevented it from cutting into the UNC lead all game—it was its third consecutive contest converting on four or fewer triples. Taylor Soule was a bright spot for the Eagles, as the freshman energetically notched a season-high 21 points along with nine rebounds.

As has been the case in its last few games, BC fell behind early. After the game was tied at four apiece, the Eagles surrendered an 11-0 run to the Tar Heels, on the strength of a Lea Church 3-pointer and a trio of buckets in the paint. BC was struggling to close out on shooters and let UNC easily pass the ball inside. Bailey dominated the interior in the quarter, recording 14 of her 31 points in the frame.

BC, on the other hand, was sloppy with the ball on offense and was missing both interior and perimeter shots. The Eagles coughed up the rock eight times, including three each from Makayla Dickens and Emma Guy. BC shot just 5-of-20 from the field, including a 1-for-9 start. UNC, meanwhile was able to make 11 of its first 16 attempts and took a sizeable 16-point lead into the first quarter break.

The Eagles began to find their way offensively in the second quarter of play, but they could not muster the stops to inch their way back into the game. BC attacked the paint for eight points on the interior, as well as an additional six at the charity stripe. Soule was finding pockets of space behind the defense for 11 points in the first half while guards were struggling to find their shots. Guy added eight of her own to this total, but she, along with the rest of the Eagles, were still having a hard time containing Bailey.

The 6-foot-4 sophomore picked up where she left off in the second quarter, draining a 3-pointer that proved she was feeling it on Thursday night. She added 10 more points in the quarter to bring her halftime total to 24, and she found this success on 11-of-14 shooting. The UNC guards were doing a great job at finding her in the paint, as the Tar Heels tallied 15 assists on their 20 made first-half field goals. UNC rode her success to 53 first half points against the struggling Eagles defense.

For those who had forgotten what Bailey did in the first half, she announced her presence early in the third with a 3-point play off of an offensive rebound. BC went to a full-court pressure early on in the quarter, and it caused UNC to turn the ball over—they did so seven times in a 10-minute span—but it also led to four BC fouls in as many minutes. UNC was shooting free throws for the rest of the way in the bonus, but it still marked the only quarter in which the Tar Heels shot less than 50 percent from the floor.

Despite its defensive success, BC was unable to capitalize on the other end of the floor. It turned the ball over five times and shot 0-for-5 from behind the arc. The Eagles have been struggling from the perimeter in the last few games, shooting just 3-of-21 against Clemson and 4-of-16 against Notre Dame. With the shooters not finding their rotations on shots, BC continued to pound the offensive glass, where it posted 18 rebounds in the game, but converted on less than half of its second-chance opportunities.

With BC on a 6-2 run and set to carry momentum into the fourth quarter, UNC inbounded the ball with six seconds on the clock. Kea sprinted down the floor and confidently pulled up and nailed a 3-point dagger that ballooned the lead back to 17 heading into the final frame.

The Eagles were still able to find success early on in the fourth quarter. They continued to force Tar Heel turnovers, and a pair of Guy floaters cut the lead to 10. However, Kea always had the answer. She scored six consecutive UNC points that maintained the team’s double-digit advantage. In fact, BC cut the lead to 11 or fewer six separate times in the quarter, but it was never able to reduce the deficit to fewer than 10.

Although BC needs just one more win to clinch an above .500 regular season, back-to-back games against a pair of ranked teams in Louisville and Syracuse means that the aforementioned threshold—one that seemed nothing short of guaranteed after an impressive non-conference schedule—will be quite difficult to attain.