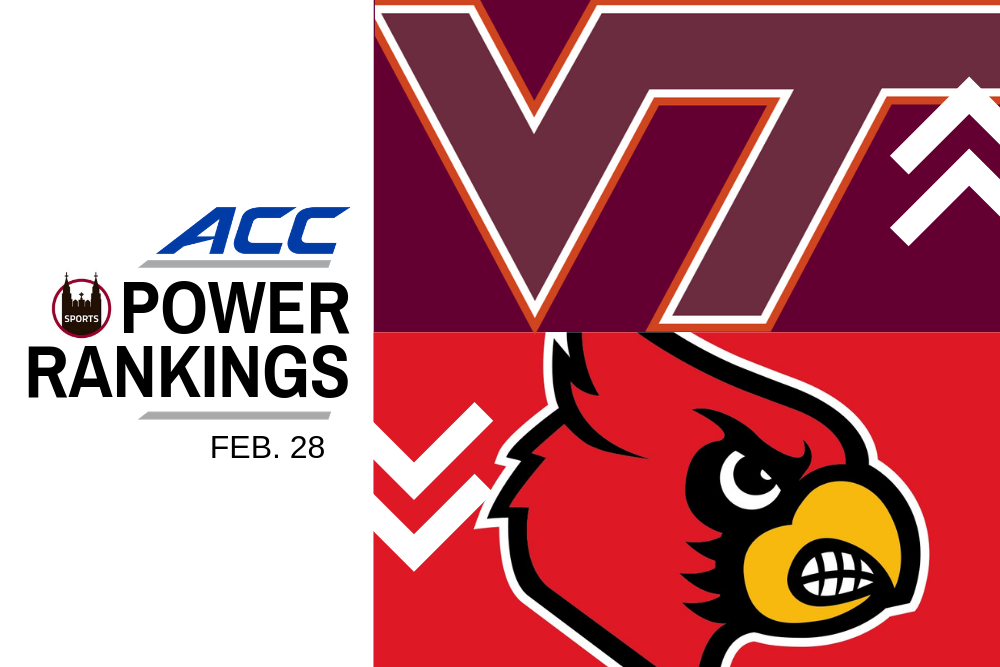 It was a week of unexpected results in the ACC, whether it was a limping Duke going down to Virginia Tech, or Louisville struggling mightily and falling to Boston College. The Hokies get a bump up in this weeks ACC Power Rankings—they’re proving the loss of Justin Robinson is something they can fight through—while much of the field remains locked firmly in place.

The conference headlines have been dominated by Duke and Virginia this season, but there’s absolutely zero reason anybody should be sleeping on Roy Williams’ Tar Heels. UNC is seventh in the country in offensive efficiency and 13th in defense, which has translated to 11 wins in its last 12 games—including a thorough victory over a Zion Williamson-less Blue Devils team. Coby White was in a bit of a slump, but the freshman guard broke out for 34 points on 14 shots in a win over Syracuse on Tuesday.

The Cavaliers have won eight of their last nine, the lone blemish a setback at home against Duke. UVA has just two losses on the year—both to the Blue Devils—and has largely made quick work of the rest of the conference. After a brutal stretch that included wins over No. 5 North Carolina and No. 20 Virginia Tech, the Cavaliers got a chance to breathe with a comfortable 30-point win over Georgia Tech, then host the worst team in the conference in Pittsburgh on Saturday.

It’s not easy to lose someone like Williamson, and the Blue Devils have made that abundantly clear the last few games. They’re 1-2 without him (counting his early exit against UNC), dropping games to the Tar Heels and the Hokies before needing a second-half rally to escape Syracuse. R.J. Barrett has had to shoulder a larger burden, averaging 28 points per game over the three-game stretch, so the likes of Tre Jones and Cam Reddish will need to step up more.

The duo of Nickeil Alexander-Walker and Kerry Blackshear has stepped up in Justin Robinson’s absence, and the Hokies have now won four of five after upsetting Duke on Tuesday. Blackshear dropped 23 points on just nine shots on the Blue Devils, while Alexander-Walker had 13 points and six assists in a well-rounded effort. Buzz Williams has done a terrific job coaching and preaching a “next man up” philosophy, as Robinson was a high-usage player for the Hokies.

The Orange has been up-and-down throughout the year, but it showed plenty of signs of promise in losses to Duke and North Carolina this past week. Against the Blue Devils, Syracuse took a five-point lead into the break, but couldn’t withstand an early surge and faded late. Then, against UNC, the Orange led by as much as nine, but didn’t have the ability to keep it up for the whole game. Syracuse has a stingy defense, 20th in defensive efficiency, but the offense—Tyus Battle aside—hasn’t been able to click consistently enough to knock off the big guns. You can bet, though, that nobody ahead of them in the conference table wants to meet them in the upcoming ACC Tournament.

The Seminoles saw an eight-game winning streak come to an end against the Tar Heels. They hung with UNC through three quarters of the game, but couldn’t keep up and were outscored by 11 in the final 10 minutes of an 18-point loss. FSU followed that up with a poor showing against Notre Dame—it trailed by eight at the outset of the second half—but avoided a bad loss by closing strong. Outside of two shocking early losses in conference play, the Seminoles have looked the part of a team capable of making a run in the tournament, boasting a rangy group of players that contribute to a top-15 defense.

The Wolfpack needed overtime to beat BC, but responded with a healthy 20-point drubbing of Wake Forest. N.C. State has been very inconsistent as of late—as every team in the ACC seems to be—but it has won four of five, the lone loss coming against Duke. Markell Johnson is fourth in the conference in assist rate, facilitating the fifth-most efficient offense in conference play. The Wolfpack has been playing at a high tempo against conference opponents, and it’s largely worked on the offensive end—but it has also made them susceptible to allowing a lot of points, as evidenced by the 10th-best defensive efficiency.

Things have gone from bad to worse for Chris Mack’s team, the latest setback in a three-game skid coming against BC on the road on Wednesday night. The Cardinals had lost to Syracuse by 20 and UVA by 12 before arriving in Chestnut Hill, and they were sent packing after shooting just 33 percent as a team (and 21 percent from distance). Louisville rattled off six straight wins earlier in the conference slate but have suffered a healthy dose of regression, dropping five of seven since. It has talent, as evidenced by wins over VTech and Clemson, but it doesn’t have anywhere close to enough consistency.

Since suffering a three-game losing streak, the Tigers have responded by knocking off two lesser foes in BC and Pittsburgh. Hovering right around .500 in conference play, Clemson is a tough team to make sense of, having largely failed to measure up against anybody ahead of them in the standings. Marcquise Reed scores almost 20 points per game as a talented volume scorer, but it’s sometimes the lesser known guys that step up. In the win over the Panthers, big man Elijah Thomas filled up the stat sheet with 12 points, eight rebounds, five assists, three blocks, and three steals.

Ky Bowman hasn’t arguably gotten the attention he deserves on national draft boards, that much was clear as he guided his team to an upset of Louisville. Bowman had 25 points, 12 rebounds, eight assists, and three steals in an important win for the Eagles—they’d lost back-to-back winnable games against N.C. State and Clemson. The biggest problem for BC in conference play—other than failing to put together a full 40 minutes—has been defense. The Eagles are 14th out of 15 teams in conference play in defensive efficiency, additionally ranking last in block and steal percentage.

The Hurricanes have alternated wins and losses since Feb. 2, with the latest entry a humiliating road defeat to a bad Wake Forest team. They’re a baffling bunch, as they managed to take UNC to overtime—in Chapel Hill nonetheless—but followed it up with a setback against BC. They blew the doors off of Georgia Tech, but then faltered against the Demon Deacons. Jim Larranaga has taken his team to the NCAA Tournament three years running, but the last two have featured first round exits, and it’s not looking bright in Coral Gables.

The only reason the Hurricanes are getting the nod over the Yellow Jackets in these rankings is last Saturday’s head-to-head meeting, one in which GT managed less than a point per possession en route to a 15-point loss. We’ve covered how bad the Yellow Jackets are on offense in these rankings time and time again, but this year is particularly bad. Josh Pastner’s first year as head coach, back in 2016-17, saw GT finish 259th in offensive efficiency—but it still went to the NIT as a No. 6 seed on the strength of the sixth-best defense in the country. This year, the Yellow Jackets are 265th in offense, and a 29th-ranked defense simply isn’t enough to bail them out.

The Demon Deacons pulled a stunner on Tuesday, knocking off Miami. They’ve won two of three, a silver lining on what has been a largely dreadful season—they were 2-10 in the conference before this recent spurt. As one of the worst shooting teams in the country with a 45.3 percent effective field goal rate, it’s been hard for Wake Forest to keep up with most teams as it also ranks 220th in defensive efficiency. Don’t expect a strong close to the season, though, as it has Syracuse, Duke, and FSU left.

Credit to the Irish, they’ve certainly made things interesting the last few games. Mike Brey’s side lost to UVA by six, VTech by eight, and FSU by seven. They also faltered at home against a bad Wake Forest team, but they’re fighting, which is admirable all things considered. John Mooney gets his points, that’s for sure—the junior center hasn’t failed to crack double digits since Jan. 1. He’s also the conference’s best defensive rebounder (31.2 percent in conference play) and boasts the 13th-highest usage rate among ACC players.

The Panthers scored 16 points in the first 20 minutes against Clemson on Wednesday night—this team is quite bad. That game would never get within single digits after the first half, as one might expect, and Pittsburgh dropped its 11th game in a row. It’s been a steep learning curve for a group of players that ranked 305th in the country in experience coming into this season. At the very least, there’s time to grow, as Xavier Johnson, Trey McGowens, and Au’Diese Toney form a decent core for head coach Jeff Capel to work with.

Eagles Bounce Back from Ugly First Half, Top Slumping Cardinals
Notebook: Bowman, BC Wake Up in Second Half to Finally Beat Cardinals in ACC Play