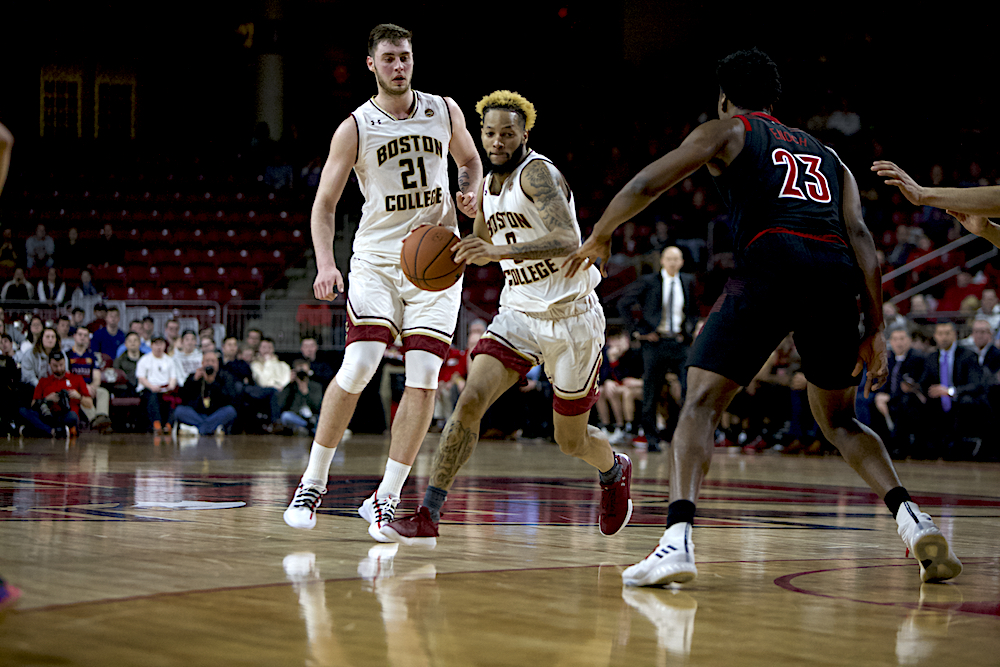 Eagles Bounce Back from Ugly First Half, Top Slumping Cardinals

Boston College men’s basketball has struggled to find any semblance of consistency this season, which has resulted in stretches in which the Eagles are either on fire from the floor or can’t buy a bucket. Against Louisville on Wednesday night, they experienced both of these instances to their fullest extent. Despite enduring a scoring drought that lasted for nearly eight minutes, BC finally found its shooting stroke in the second half and a way to knock off the visiting Cardinals, 66-59.

Ky Bowman came within two assists from a triple double for BC (14-13, 5-10 Atlantic Coast), piling up 25 points, 12 rebounds, and eight assists in a win that snapped a two-game skid. Louisville (18-11, 9-8), which has dropped five of its last six, was paced by a 22-point effort from Steven Enoch and a double-double from Jordan Nwora, who registered 13 points and 12 rebounds.

From the beginning, it was clear that this was going to be an ugly contest. Both teams struggled to shoot the ball, and the visitors committed numerous turnovers. In just the first few minutes, the Cardinals were called for three offensive fouls, two of which were assessed on Nwora—who logged a season-high 32 points the last time these two teams met in a 10-point Louisville win. Nwora made his way to the bench, and each team continued to sputter on offense.

Through the first 11 minutes of play, BC built a slight 14-12 lead. From there, the Eagles began to develop some momentum. Jordan Chatman hit two jumpers, and free throws from Nik Popovic and Jared Hamilton extended the advantage to six. But, for the last 5:36 of the half, the Eagles went scoreless. Louisville capitalized, stringing together a 9-0 run to enter halftime with a one-point lead.

In short, the first half was a pitiful display by both teams. The Eagles’ mark of 22 points was their lowest scoring first half of the entire season. BC and Louisville combined to shoot just 17-of-63 (27 percent) from the floor, and each team shot below 20 percent from 3-point land. With the Cardinals possessing a number of big bodies, they outrebounded the Eagles by a margin of 10. There weren’t many positive takeaways from this dreadful 20 minutes, but BC did play great defense in the first half.

Coming out of the locker room, the Eagles couldn’t shake their slump. BC’s scoring drought ended up nearly reaching eight minutes—dating back to the opening frame—before Popovic finally found a bucket in the paint. A Nwora layup gave Louisville a five-point lead, forcing head coach Jim Christian to call timeout. Straight of out of the break, Bowman dished it to Popovic, who finished with a dunk. The Bosnia and Herzegovina native notched another layup to further cut Louisville’s lead.

Enoch largely kept the Eagles at bay until Bowman came alive. The star point guard struggled massively in the first half, tallying five points on 2-of-11 shooting. But the junior began to catch fire with a drive to paint coupled with a strike from deep. Both teams traded blows from beyond the arc. Ryan McMahon answered Bowman’s 3-pointer with a triple of his own, then Jairus Hamilton drilled a shot from 3-point land.

At this point, both teams finally found an offensive rhythm. The Cardinals regained a five-point lead, but BC stormed back with a 7-0 run thanks to a 3-pointer from Popovic and points by Bowman and Jared Hamilton. A layup by Cristen Cunningham knotted the game at 51 apiece with under four minutes to go.

It was the Eagles who came ready to play in crunch time. After the two teams traded buckets, Bowman pulled up from beyond the arc and nailed a 3-pointer to give BC the lead. Steffon Mitchell then forced a turnover on Cunningham, and he found Jared Hamilton on the other end for a fast break layup.

With two minutes left to play and down by five, the Cardinals wasted a full minute by failing to score on two late-game possessions. Bowman was then fouled, and his two free throws gave the Eagles a seven-point edge with under a minute left to play. At this stage, BC had the contest wrapped up, and both teams traded baskets and free throws in the final seconds.

“We didn’t let bad offense affect our defensive effort, and that’s what you got to do to win,” Christian said after the game.

This was a big win for the Eagles, who were coming off a two-game skid in which they dropped winnable contests. Granted, while Louisville was ranked in the Coaches Poll, this is a team that’s in the midst of a huge slump. Louisville, ever since blowing its massive lead against Duke, has not been the same team that it was earlier in the year. Head coach Chris Mack was not pleased with the Cardinals’ performance.

“Our mentality becomes soft over time,” Mack said. “When things don’t go our way—both individually and collectively—we just let that affect us. We just do. It’s sickening to watch.”

He didn’t stop there, though.

“We had everything to play for. And you wouldn’t be able to tell that in the last five minutes of the game,” the first-year head coach said. “No disrespect to Boston College. Before tonight, they won four conference games. But I don’t think they had much to play for.”

But the Eagles proved Mack wrong. Despite playing in what feels like a lost season with the slew of injuries, BC has displayed grit and shown that there is something on the line. There have been some tough stretches in the conference slate with several extended losing streaks, but the Eagles are now up to five victories with three games remaining in the regular season. BC has dates with Georgia Tech, North Carolina, and North Carolina State. Besides the matchup with UNC, the other two games are quite winnable, and if BC were to prevail, it would match its mark of seven ACC victories from last season. The prospects of achieving that many conference wins seemed doubtful just a couple of weeks ago, but now it is certainly within reach.