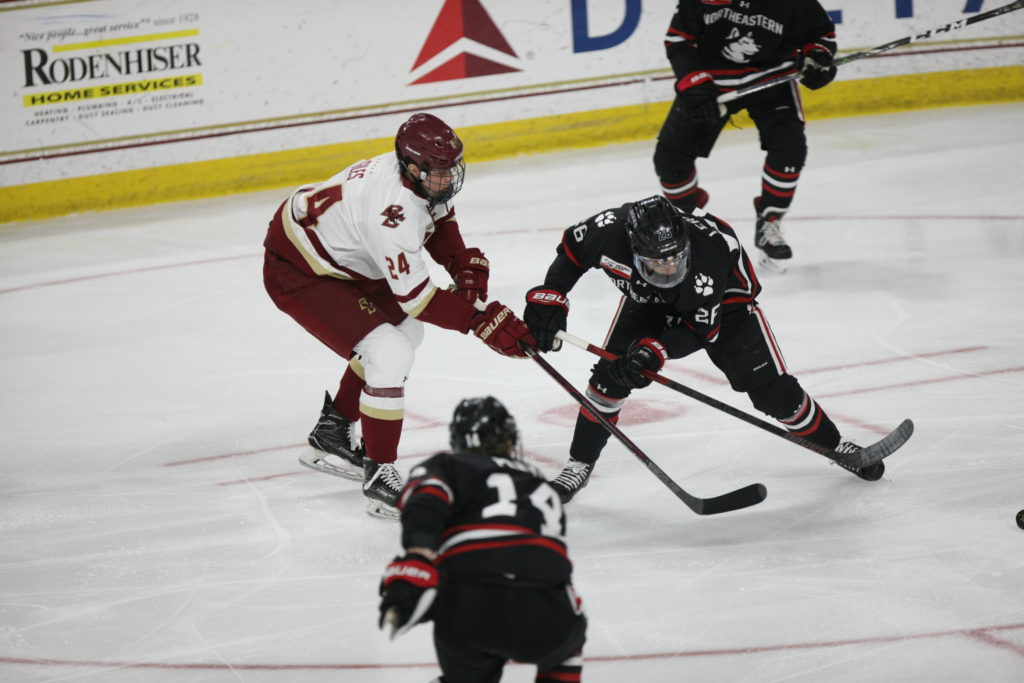 Fitzgerald Sparks Eagles to Senior Night Win Over No. 9 Northeastern

Boston College men’s hockey entered Friday night’s contest against No. 9 Northeastern carrying a six-game losing streak and badly in need of momentum. Three minutes into the second period, things appeared to be going from bad to worse, as the Huskies took a 1-0 lead and looked primed to continue the Eagles’ misery. That is, until Casey Fitzgerald—one of five BC players that was being honored on Senior Night—took matters into his own hands.

With six minutes played in the second period, the puck popped out to Fitzgerald at the top of the right circle following a scrum in front of the net. The senior captain made no mistake, ripping a shot off the underside of the crossbar and past Northeastern netminder Cayden Primeau to knot the score at one apiece. It was the offensive spark the Eagles needed, as they added two more goals in the third period to claim a massive 3-1 win.

The last time these two teams met—the Beanpot final just a month ago—BC (11-18-3, 10-9-3 Hockey East) looked very competitive with the Huskies (21-10-1, 13-8-1) but was undone by goals in the final two minutes of the first and second periods. Friday night, the same story nearly unfolded. For the first 18 minutes of the opening frame, both teams struggled to find a foothold in the game, and clear-cut chances were few and far between.

As the period wound down, though, the Huskies nearly scored late again, as Joseph Woll was forced to block a fierce slapshot from Patrick Schule. Seconds later, Austin Plevy nearly scored from just outside the crease but couldn’t lift the puck over Woll’s pads. Then Biagio Lerario juked a BC defender and lifted a wrister over the crossbar. Northeastern was also nearly gifted a goal, as Jesper Mattila mishit the puck in his own zone directly in front of cage, but Woll was able to cover it up, and the Eagles escaped to the locker room unscathed.

The dearth of goals wouldn’t last long, though. Just three minutes into the second period, Liam Pecararo pivoted and fired a shot in from the right circle. Plevy, who had been screening the BC goaltender, tipped the puck slightly, and it squirted past Woll to give the Huskies a 1-0 lead.

Fitzgerald’s eventual answer seemed to inspire BC offensively, and the Eagles began to generate chance after chance. Ron Greco walked into the slot before firing a wrister that Primeau gloved away, then David Cotton and Oliver Wahlstrom both saw shots turned away by Primeau’s pads. BC was moving the puck well and playing with energy but couldn’t manage to beat Primeau. The sophomore, who made 33 stops in the Huskies’ Beanpot final victory over the Eagles, was once again in top form.

The only thing that slowed BC’s offensive momentum was the penalty box, as Cotton and Aapeli Räsänen both went to the box for two minutes for boarding, but the Eagles managed to carry their energy to the penalty kill, successfully stopping both Huskies power plays while not allowing a single shot attempt. In fact, the latter of the two penalties nearly led to a goal. Räsänen jumped out of the penalty box and immediately caused a turnover, leading to a slapshot from Christopher Brown which was turned aside by Primeau. That was the last good opportunity either team had for the remainder of the period, setting the stage for a tense third period with the score still knotted at one.

At the outset of the third, however, Northeastern nearly tilted the momentum back in its favor, as Liam Pecararo took advantage of a turnover to create a 1-on-1 opportunity with Woll, but the Toronto Maple Leafs prospect used his glove to deny a backhand attempt from the forward and keep the score tied. That miss left the door open for BC, and it took the opportunity to seize control.

Michael Karow picked up the puck on top of the left circle following a wraparound attempt from Jack McBain and let fly with a wrist shot that caromed off Primeau’s pads high into the air and dropped just outside the crease. There, Marc McLaughlin proved to be in the right place at the right time, stuffing home the rebound after the fortuitous bounce to complete the Eagles’ comeback.

From there, BC continued to play with an energy befitting the occasion, winning battles for the puck and keeping Northeastern from creating good scoring opportunities with physical play. The Eagles killed off another penalty without incident after Ben Finkelstein was whistled for slashing with nine minutes remaining to go 3-for-3 on the kill.

“I think we denied them great entries into our zone, had good forechecks going a number of times” Jerry York said. “We were disruptive to them, and that certainly helps, because they’re excellent on the power play.”

Northeastern gained one final man advantage, pulling Primeau with just over a minute to play, but again BC defended admirably. Cotton picked up the puck in the neutral zone before skating across the blue line and sliding it into an empty net to seal a 3-1 win that provided the seniors with a fitting send off in their final home game.

“It’s a great class,” York remarked when asked about the seniors postgame. “Our record’s not what we’d like it to be, but their leadership has been rock solid. It’s as good a group of seniors as I’ve had as far as leadership and direction they’ve showed to our underclassmen.”

Indeed, the senior leadership showed up in a big way Friday night, as BC turned in one of its best performances of the season, against a top-10 opponent no less. 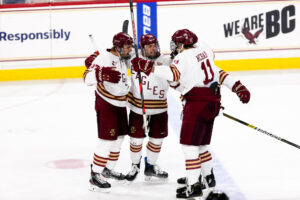 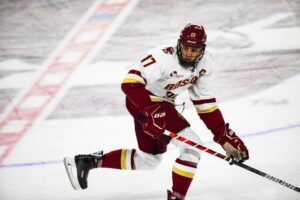 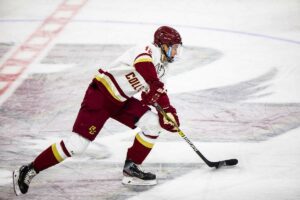