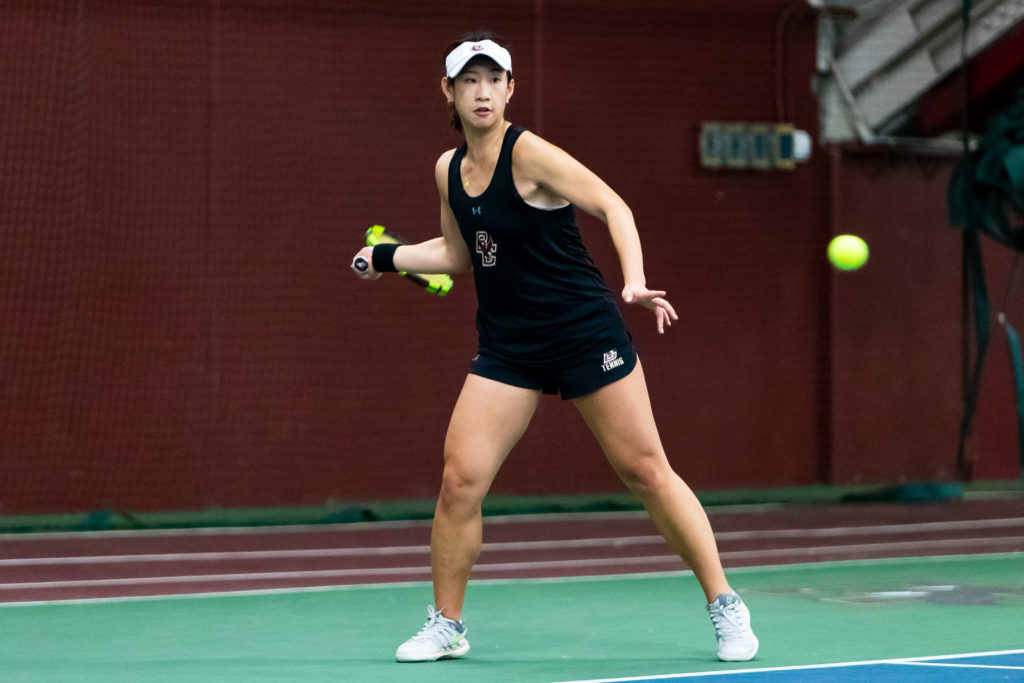 After a strong start to the season, Boston College women’s tennis has found itself in a recent slump. The Eagles faced adversity in the Carolinas after a 6-1 loss to Wake Forest on Friday night, rounding out the road trip with an identical loss Sunday afternoon against Clemson.

The Tigers (6-8, 2-4 Atlantic Coast) were relentless from the outset. Possessing the top-ranked doubles team in the nation with Marie Leduc and Fernanda Navarro, Clemson managed to clinch the doubles point with ease, taking down the Eagles’ top pairing in Yufei Long and Jackie Urbinati, 6-2. As BC (9-5, 1-5) typically prides itself on its strength in doubles competition, the Eagles took an immediate hit to their confidence, and momentum quickly shifted in the Tigers’ favor early in the match.

Clemson proved equally impenetrable in singles competition, as Navarro managed to stuff the No. 2 singles match away in two sets against Kylie Wilcox, recording the second point for the Tigers. The Eagles in adjacent courts faced similar fates, as Clemson would eventually earn straight-set victories at No. 1, No. 2, and No. 5 singles against marquee Eagles players.

In the fifth court, Clemson’s Alex Angyalosy boasted an impressive serving game to keep Maria Ross at bay, sweeping two consecutive sets in a swift fashion, positioning the Tigers one win away from taking the match. All heads turned to the first court, where the top-seeded matchup of Ludec and Long proved to be a pivotal deciding factor.

The first set was competitive, as Long’s impressive net play kept her within striking distance. This momentum fizzled, however, as Ludec quickly defended her position as one of the top players in the ACC. In the final minutes of the set, Ludec put forth a strong effort to pull away from Long, sharpening her play enough to attain the two-point advantage to take the frame, 4-6. She only strengthened her game from there, leaving Long scoreless in the second set to earn the Tigers’ match-winning point.

As was the case Friday night, Natashi Irani earned the Eagles’ sole point of the match, defeating Clemson’s Sydney Riley in three sets for her second singles victory of the weekend.

The Eagles have proven their capabilities this season—from their impeccable performance on doubles courts to their upset of No. 25 Syracuse on Feb. 3—but have recently failed to maintain the same level of play. Of late, the Eagles have found themselves cold and stale on the courts, as they struggle with a rigorous and challenging match schedule. With the ACC being one of the strongest tennis conferences in the nation, BC will have to keep its recent losses in perspective and enter the second half of the season fresh.

The Eagles will take a one-week hiatus before they return home to play Binghamton, their first non-conference opponent in five weeks. While BC is in no way short of talent, it will have to head into its remaining matches prepared to play past its thresholds, while putting forth a cohesive team effort to salvage a record-breaking season.