Home » BC Drops Overtime Heartbreaker to Georgia Tech in Atlanta 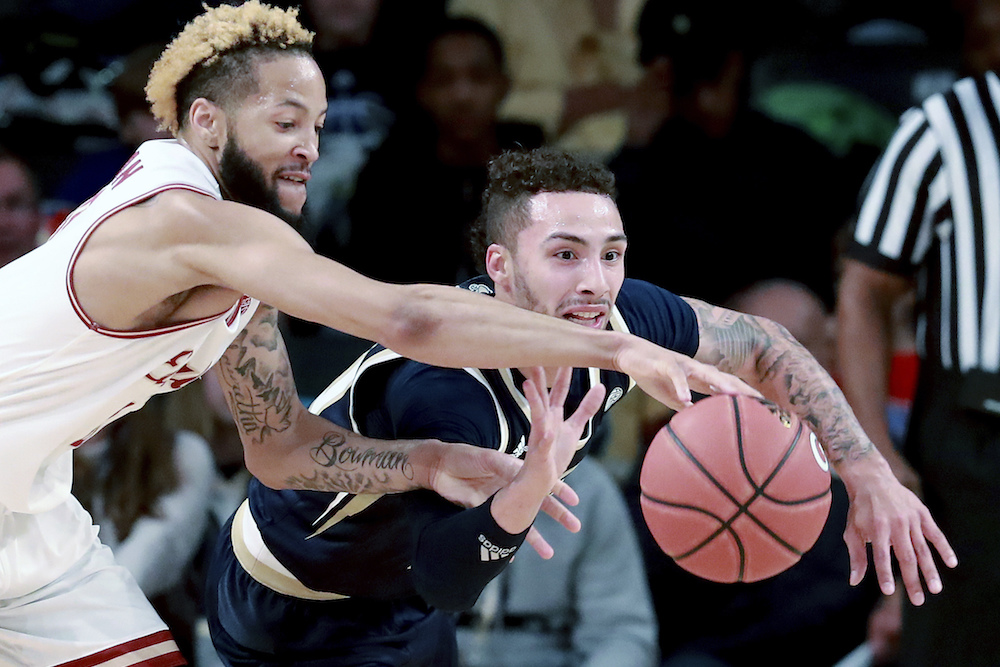 BC Drops Overtime Heartbreaker to Georgia Tech in Atlanta

Boston College men’s basketball entered Sunday night’s contest against Georgia Tech having won three of its last five games, a positive streak that could mainly be attributed to improved play on the defensive end of the court. In their latest outing against Louisville, the Eagles held the Cardinals to 59 points on 33-percent shooting. With BC traveling down to Atlanta to face a reeling Yellow Jackets team that had lost nine of its last 10 games, it appeared that the Eagles had a great chance of sustaining this late-season push and maintaining their newfound defensive integrity.

Unfortunately for head coach Jim Christian and Co., that did not come to fruition. Despite GT averaging only 64.7 points per game—ranking 332nd in the nation in scoring—BC could not stop the Yellow Jackets on defense. The Eagles allowed GT to put up 40 points in the first half, and while they battled back in the second frame to force overtime, the Yellow Jackets prevailed in the extra period, 81-78.

With the loss, BC (14-14, 5-11 Atlantic Coast) is now 0-4 in overtime games this season. Part of the reason the Eagles have been unable to sustain a full effort in the extra period is due to injuries. Wynston Tabbs missed his 11th straight game, Jairus Hamilton exited in the second half with an ankle injury, and Steffon Mitchell battled shoulder pain all night long.

In the opening 10 minutes, BC controlled the contest. The Eagles raced out to an eight-point lead powered by Nik Popovic and Jordan Chatman. In particular, Popovic dominated the paint, as the junior went on to finish the night with a team-high 24 points to go along with nine rebounds. But out of the media timeout, GT found its shooting stroke, and, on the back of a 16-4 run, gained a four-point lead. Popovic scored four straight points to knot the game at 29 apiece, but it was all Yellow Jackets the rest of the way. Jose Alvarado and James Banks III finished the half with a combined total of 29 points to give GT a seven-point cushion.

For much of the second half, BC struggled to close the gap. Despite buckets from Jared Hamilton, Ky Bowman, and Chatman, the Yellow Jackets maintained a comfortable edge as the Eagles were unable to generate consistent defensive stops. A layup by Popovic cut the deficit to just three, but GT responded with two buckets to extend its lead back to eight points. This narrative played out for much of the half before the Eagles flipped a switch.

With GT leading, 62-54, BC finally cut into the lead for good. The Yellow Jackets’ started to go cold from the floor, and buoyed by makes from Chris Herren Jr., Johncarlo Reyes, Jairus Hamilton, and Bowman, the Eagles tied the contest at 63.

Popovic followed up with a putback layup to give BC its first lead of the half, but Michael Devoe immediately responded with a 3-pointer. Popovic immediately retorted with a hook shot, but GT used two buckets by Devoe and Banks III to take a three-point lead with 1:15 remaining. On the ensuing possession, Chatman was stripped in the lane, but Jared Hamilton forced a Alvarado turnover. The Georgia Southern transfer was fouled and sent to the line, where he hit 1-of-2. Luckily for the Eagles, Mitchell—as he did all night—made the hustle play and scrummed for the offensive board.

Then, Chatman coughed up the ball yet again—but the Yellow Jackets could not capitalize. Jared Hamilton blocked Alvarado, and Bowman grabbed the rebound and immediately turned up court. Before he could cross the GT logo, he was fouled with 30 seconds remaining. The junior came through in the clutch, drilling both shots from the charity stripe to knot the game at 70 apiece. GT proceeded to drain the clock, and Curtis Haywood II—who hadn’t converted a single field goal in his past four games—took the final shot from deep. It was no good, though, setting the stage for overtime.

For the first three minutes of the extra period, BC went scoreless. Meanwhile, the Yellow Jackets used two free throws from Khalid Moore and a layup by Devoe to go up four points. Mitchell, while playing with an ailing shoulder, came up huge for the Eagles by snapping the scoreless streak with a layup. Alvarado hit a jumper on the other end, but then Mitchell was fouled on the following possession. Under massive pressure, the sophomore converted both free throws to make it a two-point game.

Out of the media timeout, Devoe—who finished with 20 points—connected on a long-range trey to further extend the Yellow Jackets’ lead. After missed conversions by both teams, Popovic nailed a long-jumper to make it a one-score contest. With 24 seconds left and time for another possession, Jared Hamilton fouled Alvarado to Christian’s dismay. Fortunately for the Eagles, Alvarado only sunk one free throw. Hamilton was able to make up for his error by hitting a mid-range jumper to once again cut the deficit to two.

Mitchell nearly recorded a steal on the following inbound, but he was called for a foul on Moore. At the line, Moore only knocked down one shot from the charity stripe. With the score at 81-78, the Eagles had an opportunity to force double overtime. Bowman dribbled the ball up court, and with seven seconds left, BC called timeout. Attempting to save the Eagles, Bowman created just enough separation and launched a contested 3-pointer. The ball rimmed out, sealing the Eagles’ fate—an eerily similar miss to the shot that would’ve won the North Carolina State game on Feb. 20.

This feeling of disappointment has become all too familiar for this BC team. Whether one chalks it up to injuries or poor coaching, Sunday night’s contest marks yet another winnable game that the Eagles dropped this season. With the loss to GT, BC is now 6-45 in road games with Jim Christian as head coach. The Eagles are currently slotted in at the No. 10 seed for the ACC Tournament, but with matchups against North Carolina and N.C. State looming, it’s highly plausible that this team slides further down the standings and limps to a forgettable finish.