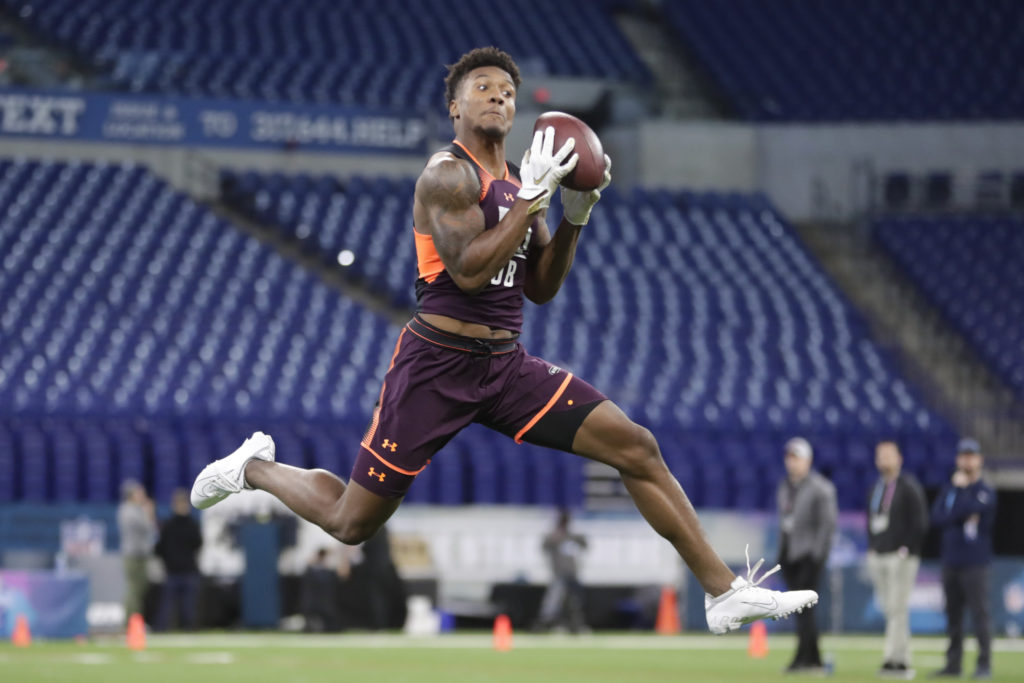 This weekend, Lucas Oil Stadium played host to more Boston College football prospects than ever before. The Eagles sent seven players—Chris Lindstrom, Tommy Sweeney, Zach Allen, Wyatt Ray, Hamp Cheevers, Lukas Denis, and Will Harris—to the 2019 NFL Combine, the most in single-season program history and the second most in the ACC. Only 13 other schools—including Alabama and Clemson, winners of the past four national titles—had more prospects in Indianapolis. Some of BC’s finest shined, while others’ stock fell. Here’s what we learned from the weekend.

1. S Will Harris Can Hit and Run

During his four-year career at BC, Harris garnered a reputation as one of the—if not the—hardest hitters on the team. But on Monday, the defensive back showed the world that he has more than just power. Harris ran a blistering 4.41 40-yard dash, the fourth best among 2019 Combine participating safeties. To put that in perspective, that split is at least a tenth of a second faster than each of the last four Eagles defensive backs to be selected in the NFL Draft. Combined with his 20 bench press reps—tied for third among safeties—and top-five finishes in the three-cone drill and 20-yard shuttle, Harris’ 40 was the highlight of a breakthrough pre-draft performance.

2. OG Chris Lindstrom is Looking More and More Like a First Rounder

Chris Lindstrom made a name for himself at the Senior Bowl a bit more than a month ago, and he only continued to impress on Friday. It all started with a 4.91 40-yard dash, the second fastest of 2019 Combine participating offensive linemen. Lindstrom was just one of four in his position group to break the five-second barrier. Although he lacks the upper body strength of some of his fellow prospects—he only recorded 25 bench press reps and is often labeled as “short-armed”—his quickness on the line of scrimmage has scouts salivating. Lindstrom, who started his final 47 games in a BC uniform, is as consistent as offensive linemen get, and his Combine numbers speak to just how athletic the interior lineman really is.

3. CB Hamp Cheevers’ 40-Yard Dash Time Did Him No Favors

BC listed Hamp Cheevers at 5-foot-10, 180 pounds before the start of the season, but there was always speculation that the shifty cornerback was even smaller than the media guide suggested. The Combine confirmed those suspicions, as Cheevers measured in at 5-foot-9, 169 pounds. With a small frame, the junior needed to make up for his size with his speed, but—despite breakaway capability—only ran a 4.52 40-yard dash on Monday. As expected, the Trenton, Fla., native excelled in the on-field drills, specifically those in which he was able to put his ball skills on full display. Still, Cheevers’ 40 time will raise questions, especially for a defensive back that, historically, has had trouble defending the deep ball.

Once projected to be a first round pick, Zach Allen—in large part due to his poor Senior Bowl performance—has dipped into Day Two territory. On Sunday, his stock might have taken another hit, but not necessarily because of anything he did—more so because of what he didn’t do. Part of one of the most talented defensive line groups in recent memory, one that features athletic phenoms like Mississippi State’s Montez Sweat and Michigan’s Rashan Gary, Allen’s Combine test results simply appear inferior. In reality, though, they still reflect highly on the do-it-all defensive end. After all, what’s important is that Allen ran a 1.65 10-yard split and finished the three-cone drill in 7.34 seconds, not that he clocked out with a 5-flat 40-yard dash.

Back in 2017, Lukas Denis finished the regular season tied for the most interceptions in the country. Whenever he got his hands on the ball, there was no telling when he was going down—in fact, he averaged 25.6 yards per return, which made his 40-yard dash split all the more surprising on Monday. Denis ran a 4.64, ranking outside the top 15 of Combine participating safeties. Yet it wasn’t long before he reminded scouts why he’s NFL Network Analyst Bucky Brooks’ fifth-rated safety. Denis finished third in the 20-yard shuttle and fourth in the three-cone drill, beating out Harris in both drills, not to mention his superb ball skills in the on-field workouts.

6. TE Tommy Sweeney Continues to Prove Himself as Both a Receiver and Blocker

Tommy Sweeney is looking to become the first BC tight end to hear his name called in April since Sean Ryan was taken by the Dallas Cowboys in the 2005 Draft. He got one step closer to achieving that goal on Saturday. After running a 4.83 in the 40-yard dash—the 13th-best time among 2019 Combine participating tight ends—Sweeney more than held his own during the on-field workouts. Aside from a few body catches, the Ramsey, N.J., native turned in a solid gauntlet drill before exhibiting clean change of direction in the route-running portion of the workout. To top it all off, Sweeney demonstrated his ability to lift his hips into blocks, a necessary skill for dual-purpose tight ends in today’s NFL.

Despite shaving his hair before the Combine, Wyatt Ray still looked like his normal self on the field—for better or for worse. He ran a 4.83 40-yard dash, which ranked outside the top 15 of 2019 Combine participating edge rushers. On both attempts, the defensive end got out of the blocks slower than most of his counterparts, which is significant, considering that, while at BC, he struggled to burst off the snap, especially out of a two- and three-point stance. Even so, Ray made up lost ground in the on-field workouts: He demonstrated his experience dropping back in coverage and rushing the passer with swift and powerful movements around the bags.