Home » Apuzzo Once Again Shows Out in Decisive Win Over No. 12 Navy 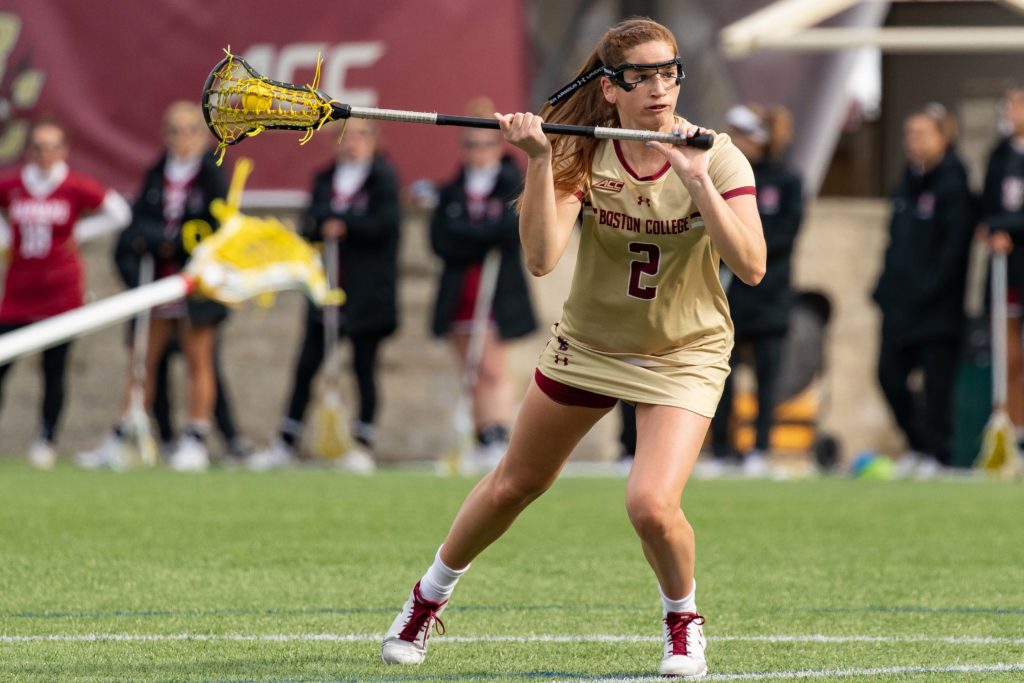 Apuzzo Once Again Shows Out in Decisive Win Over No. 12 Navy

The last time Boston College lacrosse faced off against Navy, Sam Apuzzo—in the early portion of her Tewaaraton Award-winning campaign—racked up a career-high nine goals. On Wednesday night, it looked like she might just shatter that mark against the very same team. The West Babylon, N.Y. native totaled six goals through the first 27 and a half minutes of regulation and showed no signs of slowing down.

When all was said and done, Apuzzo couldn’t keep pace, but neither could the Midshipmen. The senior created some separation atop the nation’s scoring chart with eight goals and two assists, logging 10 points for the fourth time in her career, and backup goalie Abbey Ngai—making her third straight start—matched her career high with 12 saves, as BC rolled past Navy to a 18-5 victory in Annapolis.

For the second consecutive game, it appeared as if head coach Acacia Walker-Weinstein’s team was going to have its work cut out for itself on the draw. Reagan Roelofs opened up the night by beating out Apuzzo for the contest’s first possession. Less than a minute later, the freshman rolled behind the cage and delivered a pass to Kelly Larkin. Leading the No. 12 Midshipmen (4-2) in scoring, it was only natural that the junior spun by Sheila Rietano and scored Navy’s first goal of the game.

The Midshipmen—who came into the night ranked 10th in the country in draw control percentage—won the second bout at midfield, but their hot start was short-lived—the same could be said for Navy’s lead. Over the course of the ensuing 10 minutes, No. 1 BC (7-0, 1-0 Atlantic Coast) won four of the next five draws and, as a result, tallied four of the next five goals, staking the Eagles to a 4-2 advantage.

In the teams’ 2018 matchup, it took Apuzzo 15 minutes to notch her first hat trick. On Wednesday, however, she accomplished the feat in less than half that time. The senior’s first two goals were a byproduct of behind-the-cage passes. But her third was the most impressive. Knowing that Navy goalkeeper Gab Harchelroad would most likely be anticipating another exchange from the back of the crease, Apuzzo—located in that very spot—motioned as if she was going to whip a pass to Taylor Walker, approached the cage, faked a shot, and then fired the ball into the back of the goal.

Navy wasn’t backing down that easily, though. The Midshipmen swapped a pair of scoring plays with the Eagles, preventing Apuzzo and Co. from blowing the game open before the 15-minute mark. The back-and-forth sequence started with a Moriah Snyder rebound and Marina Lazarides bounce shot, and ended with Larkin’s second goal of the game.

After Apuzzo notched her fourth goal of the period, Navy once again cut its deficit to two, courtesy of Snyder. From that point forward, it was all BC. The Eagles closed out the half on a six-goal run—four of which came in the final five minutes and 16 seconds of the frame—in large part because of their ever-increasing advantage on the draw. By the period’s end, BC led the Midshipmen, 13-4, in that department, building more and more momentum as the half progressed.

Kenzie Kent, who came into the contest having recorded six assists in three straight games, kicked off the scoring spurt. This time, she took matters into her own hands. The graduate student trotted in from behind the cage and spun past Anne Richter, causing the senior defender to hit the turf, and went bottom left for the highlight-reel goal.

Arsenault finished the night with three assists, and they all seemed to come by way of behind-the-crease passes. Her last dime of the night set the stage for Walker’s second goal of the game. Following a five-plus minute lull in scoring, the Eagles rattled off four scoring plays in succession prior to the break. Once BC extended its lead to 9-4, Navy head coach Cindy Timchal switched out Harchelroad for Abbi Young. Yet the freshman’s time in net was brief at best—in fact, it lasted all of 30 seconds.

In that span, Young conceded a pair of goals to Arsenault and Apuzzo. With Harchelroad back in the cage, Apuzzo capped the half the way she started it. On the move, the senior caught a Kent pass from one side of the net and finished on the other for her sixth goal of the game. Heading into the break, the Eagles walked off the field with an eight-goal lead and a 13-shot advantage.

At first, it looked as if they primed for another high-scoring period. Apuzzo won the opening draw, and shortly after, Arsenault sped past Gil Eby for an unassisted goal. But just about three minutes later, BC’s 7-0 run—in other words, Navy’s 18-minute, 11-second scoring drought—came to an end. Roelofs trudged by Christina Walsh before going far post for the Midshipmen’s fifth goal of the game. It was also their last.

The Eagles tacked on five more scoring plays prior to the final horn, including three in the last 10 or so minutes of regulation. They might have had more had they not coughed up the ball 11 times during the frame. Of those 11 second-half turnovers, six were forced. Navy upped the ante on the defensive end of the field, applying a great deal of pressure throughout the period.

That said, defensive intensity is only half the battle—and unfortunately for the Midshipmen, BC went toe-to-toe with them on that front, especially Ngai. Whether it was using her stick or her feet, the sophomore did everything she could to stop the Navy attack. Allowing just one second-half goal, Ngai made the win all the more satisfying for BC.

Of course, so did Apuzzo. Fittingly, the senior ended the night with a behind-the-back goal.

Harchelroad looked lost, and so did the rest of the Midshipmen. For the second consecutive year, Apuzzo owned Navy. Only this time, there was no first-half deficit—just utter domination.