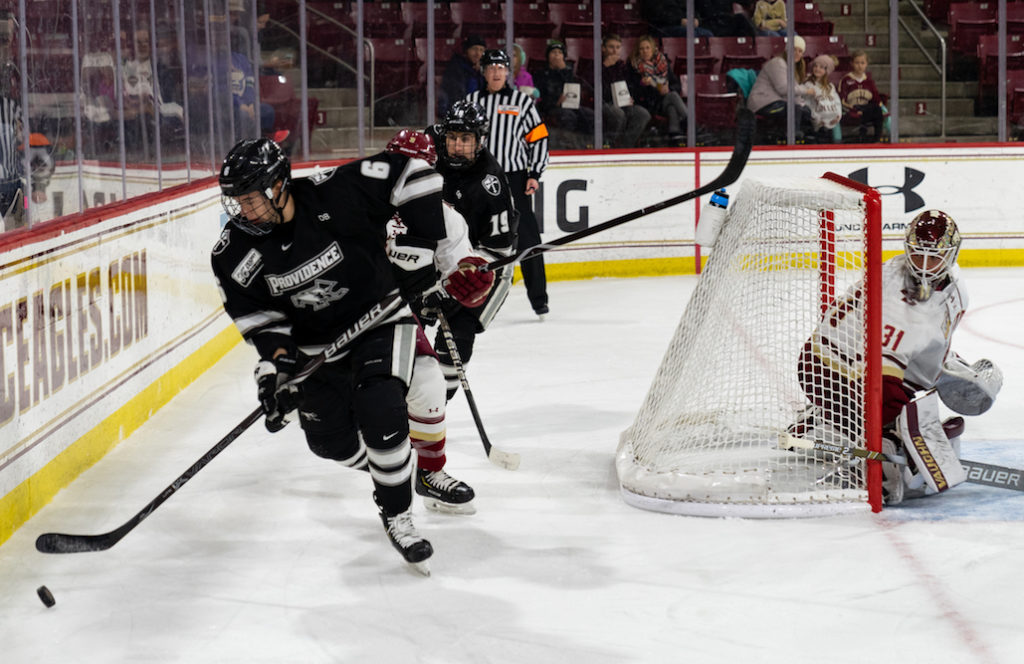 Even in an underwhelming season, Boston College men’s hockey has had wins to look back on and hang its hats on. Two of those have come against the Hockey East’s second-place team Providence, as the Eagles managed to beat them in successive weekends back in January, when the Friars were ranked seventh and 10th, respectively.

On Thursday night, in the season finale, BC walked into Schneider Arena looking to end the regular season on a high note against Providence, which had climbed back to No. 8 in the national polls. The Eagles failed to do so, though, watching a scoreless game through two periods tilt in the host’s favor, as the Friars pulled away for a 3-1 victory.

Despite remaining scoreless in the first 40 minutes of regulation, the game as a whole seemed to be controlled by Providence. The hosts played like a more well-composed unit, while the Eagles looked a bit lost during certain points of the matchup. BC eventually got itself together and started to generate some chances, but this happened much too late, with its first and only goal coming in the final minutes of the third period—and already trailing by three goals. The Eagles simply didn’t have any time to build upon their momentum, a commonplace happening that plagued them throughout the season.

Although the first period saw no goals on either side, it kicked off with Providence dominating BC, as the Friars generated 10 shots within the opening 10 minutes and seemed to maintain strong puck possession during this frame. Eagles goaltender Joseph Woll kept his team in the game with 14 saves in the opening stanza, including one impressive denial of Ben Mirageas after the puck was bouncing around in the crease.

It took BC until the back half of the period to start putting Friars goaltender Hayden Hawkey to the test, but Hawkey stood strong with nine saves in the first. The second period saw some more balanced chances being exchanged on both sides of the ice, but the inability to get the puck in the back of the net was a mutual struggle. Neither team could crack Woll or Hawkey, two of the league’s top goaltenders, and power-play chances were squandered on both sides without a single shot.

The third period featured all of the action, with Providence striking within the first minute of play, thanks to BC’s penalty trouble. After Luke McInnis went to the box for holding, Tyce Thompson skated into the Eagles’ slot on an odd-man rush and flicked a wrist shot inside the left post past Woll. The Friars didn’t slow down, scoring again just three minutes later after Patrick Giles was whistled for hooking. Thompson dished the puck out to the weak side, where Josh Wilkins was able to fire a one-timer past Woll on his glove side. After an eight-minute drought, Kasper Björkqvist sealed the deal and put the game out of reach for BC, as the Providence forward beat Woll under his pads following a quick pass from behind the net by Jack Dugan around the midway point of the period.

J.D. Dudek was the lone goal scorer for BC, picking up on his own rebound with just 3:35 left on the clock and denying Hawkey a shutout. Once again, this the senior’s strike came too late to give the Eagles any momentum, giving no hope of any feasible comeback.

The matchup against Providence seemed to represent many of the problems that got in BC’s way throughout entire 2018-19 season. It consistently kept games close for the first couple periods, but could not finish strong in the final frame. The Eagles generated numerous chances, often times outshooting their opponents—BC had a 9-8 edge in the middle period—but could not put the puck past their opponents’ goaltenders until it was too late. And, most evidently, they failed to get the job done on the road, finishing with a disappointing record of 3-14-1 while facing opponents outside of Kelley Rink.

Nonetheless, BC will start the Hockey East quarterfinals on the road next weekend, and its seeding in the league’s tournament will depend on the outcome of Friday night’s New Hampshire-Northeastern matchup. If UNH is able to come out as the victors, it would peg the Eagles against No. 1 seed Massachusetts as the No. 8 seed. If Northeastern ends up on top, however, the currently No. 7 seed Eagles will stay put to rematch the Friars.

Go Figure: Without Tabbs, Bowman’s Efficiency Has Dipped and Shot Selection Has Changed
Boccagno, Anderson Lead BC to Victory Over FIU