Outsiders, Los Angeles natives, and rock lovers grab your headphones—a new Weezer album is out. The self-titled Weezer (Black Album) is a follow up to Weezer’s 2017 Pacific Daydream and 2019 Teal Album. These two predecessors represent the experimental trend Weezer entered in the 2000s, including ’80s hit covers and glimmers of contemporary pop clichés, which contrasts the gritty rock n’ roll vibe in Blue Album and Pinkerton that ’90s fans love. Black Album follows that trend while failing to capture the same wide acclaim from the audience of the good ol’ days.

Before Pacific Daydream came White Album. Unlike the critically underwhelming Weezer albums of that period, this 2016 release traveled back in time and recaptured the band’s ’90s sound that fans knew and loved. Despite the success of the album, lead singer Rivers Cuomo feared that this reversion meant that the band was incapable of producing innovative hits, leaving them stuck in the end of the 20th century. Attempting to both please the classic fans and experiment with new music, the Black Album feels torn between the two.

The album opens up with two songs that capture the distance Cuomo desires between him and his old work. “Can’t Knock the Hustle” is a catchy tune that swaps fenders for acoustics and trumpets, resulting in a funky Latin flair. The song also wears an explicit label which is absent in Weezer’s first three albums. “Zombie Bastards” is another enjoyable track with upbeat energy and a new-Weezer feel to it. While “Can’t Knock the Hustle” incorporates elements of Latin and funk, this one sways more to the conventions of contemporary pop with vocables like “Doo doo doo.” It’s after Weezer dabbles with these non-alternative genres that the group loses consistency.

The third track “High As A Kite” is wonderful with subtle piano, hard-hitting chorus guitar, and a relatable theme of everyday escapism. The song grabs hold of the iconic melancholy tone Cuomo cultivated in his golden days, making it seem out-of-place with the upbeat mood of the two openers. When listening to the album as a whole, this sharp contrast takes away from the song’s appeal and before listeners can take in its true worth, they’re thrown back in the direction they came. The next one is “Living In LA,” which sounds more like a Maroon 5 hit than a Weezer. Again, listeners are fed contemporary pop elements such as “Woo woo” vocables and choruses that become repetitive after the seventh time around.

The second half, like the first, isn’t bad but chooses to jump from idea to idea without any coherence. “Piece of Cake” resembles “High As A Kite” with that soft piano and desolate feel. The racing beat in “I’m Only Being Honest” doesn’t change throughout the entire length. Cuomo raps at the end of “Too Many Thoughts In My Head.” “The Prince Who Wanted Everything” seems Weezer-esque, but then Cuomo sings a Brazilian ballad in “Byzantine.” Finally, “California Snow” sounds like Cuomo just discovered the synthesizer.

The value of Black Album is like the piece itself: split. On one hand, there are some great jams that push Weezer’s creative capabilities in a promising direction. Once a tune like that fades out, however, the next one rushes listeners into a whole other world. It’s like visiting Boston, Los Angeles, Philadelphia, Dallas, and New York in that order instead of taking one cross-country road trip.

Black Album is ironically dark, and it appears as if Cuomo is having trouble finding the light. Torn between pleasing fans and developing the band’s sound, Cuomo presents listeners with a variety of interesting tracks in an unorganized, jarring fashion. Even so, Cuomo’s hustle can’t be knocked, and this album is a solid first step toward getting back to fresh and innovative music for Weezer.

Weezer weezer (black album)
Students Compete for a Good Cause at ‘Sing it to the Heights’
Ramirez: Sex and the Cities 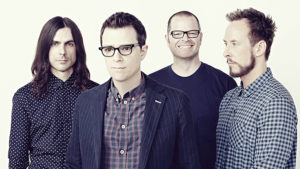 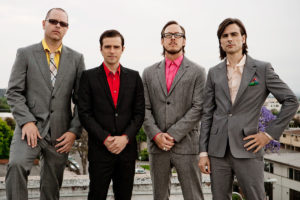