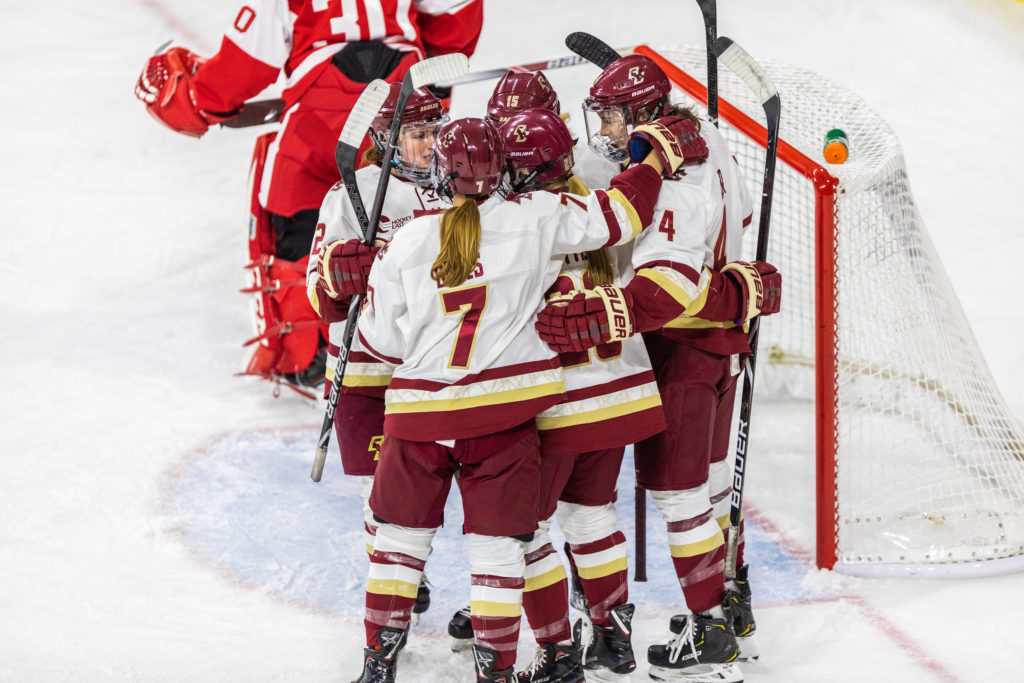 When up against Boston University this season, penalties have been Boston College women’s hockey’s kryptonite. In the three regular season matchups between the Terriers and Eagles, BU scored six power-play goals and drew a total of 16 penalties. In fact, in the Eagles’ 3-2 loss at home to the Terriers at the end of November, BU scored all three of its goals on one-man advantage.

In the Hockey East Tournament semifinal, though, BC finally found a way to flip the script. The Eagles still took three penalties, one more than the Terriers, but scored twice on the power play in the second period to break open a 1-0 game and allowed No. 8 BU to score just once on the power play, en route to a dominant 5-1 win and a berth in the Hockey East Tournament final.

Despite their proficiency while a skater up, the No. 6 Eagles (26-10-1, 19-7-1 Hockey East) didn’t need a one-man advantage to open the scoring. Right after the opening face off, Makenna Newkirk played the puck across the ice to Daryl Watts in the left offensive circle. The reigning Patty Kazmaier Award winner skated toward the center before feeding it back to Newkirk, who ripped a wrister at Terriers (21-8-8, 15-6-6) goaltender Corinne Schroeder. The sophomore made the initial save, but the rebound caromed off Lindsay Agnew, who was crashing the crease, and found the net to give BC an early 1-0 lead just 22 seconds into the game.

In contrast to previous matchups, the rest of the period was relatively clean. The two teams—which both ranked in the top three in the conference in penalty minutes entering the contest—didn’t commit a single infraction in the period, and both netminders made crucial saves to keep the scoreline at 1-0. First, after Makenna Parker picked up the puck in the neutral zone and created a 2-on-1 situation, BC’s Maddy McArthur used her shoulder pad to deny Sammy Davis at the left post. Then, with just 16 seconds remaining in the period, Megan Keller—who was named Hockey East Player of the Year for the second time in her prolific career on Friday—backhanded a shot that Schroeder pushed just out of the reach of a stretching Kelly Browne, as the Eagles settled for a one-goal advantage going into the first intermission.

The second period, however, more than made up for the first in terms of penalties. Just over three minutes in, Courtney Correia was whistled for tripping, giving BC its first chance on the one-man advantage, and it didn’t take Watts long to capitalize. The Eagles set up in the offensive zone, and the sophomore forward let a shot rip from the left circle. Schroeder turned it aside, but after a scramble Watts hustled to pick up the puck behind the BU goal. Biding her time, she moved above the goal line extended on the right side of the net before sneaking a low wrister in between Schroeder’s legs to double the advantage.

The Terriers were afforded a chance to respond nearly immediately. Caitrin Lonergan took a penalty for holding just after the ensuing face off, but the Eagles killed it without much incident, holding BU to just one shot on net that McArthur saved. It was a missed chance that the Terriers were soon rueing, as Reagan Rust was whistled for interference with just over half the second period gone, and BC once again found the back of the net.

Cayla Barnes took control of the puck at the point, and slid a pass over to Lonergan. The junior forward wasted no time whizzing a cross-ice pass to an open Browne at the other post, and she sent a one-timer past Schroeder to give the Eagles a commanding 3-0 advantage.

The Terriers would finally strike back with under six minutes left in the second period on a power play of their own, as Abby Cook found twine with a shot through through traffic from the point, but BC continued to dominate both puck possession and shot volume, and it paid off with Watts’ second scoring play.

The sophomore—who, with two goals and an assist, nabbed her 40th career multi-point game—skated the puck down the left circle before picking her spot and arrowing a shot over Schroeder’s left shoulder and under the crossbar. The goal capped off a dominant middle frame for the Eagles, in which they outshot BU, 18-4, and restored a three-goal advantage going into the final frame.

Erin Connolly would tack on BC’s fifth and final goal, burying a rebound off a drive from Delaney Belinskas, and for the most part the Eagles cruised to the finish line. McArthur—who had to make just 16 saves in the victory—stopped three shots as BC killed off the final penalty of the game, and the Eagles—who ended the game outshooting the Terriers, 36-17—were able to relax with time winding down in what was the biggest victory of the season thus far.

With the win, BC has almost assuredly booked a spot in the NCAA Tournament for the ninth consecutive season ahead of a Hockey East Tournament final date against Northeastern, a remarkable string of consistency under head coach Katie Crowley. The Eagles certainly won’t be satisfied with simply heading to the tournament, though. After all, this team entered the season with expectations of competing for a national championship. It remains to be seen whether or not this year’s team can finally be the one to break through, but if BC continues to play like this for the remainder of the year, it has an excellent shot at finally lifting that elusive trophy.