Home » BC Wins Finale With No. 8 Louisville, But Drop Two of Three 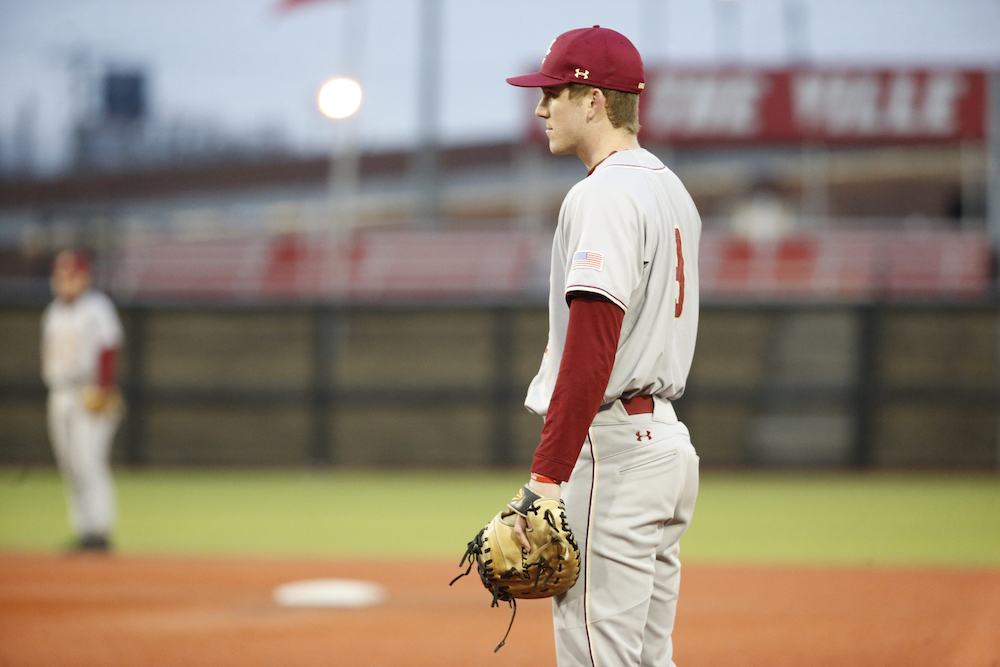 BC Wins Finale With No. 8 Louisville, But Drop Two of Three

Simply put, the first two games of the weekend against No. 8 Louisville hadn’t gone according to plan for Boston College baseball. On Friday night, the Eagles’ bats went silent against Cardinals ace Reid Detmers, mustering three hits in a 4-0 shutout loss. On Saturday—and into Sunday morning after rain suspended play—BC watched as Louisville piled on a pair of five-run innings en route to a thorough 11-4 victory.

So, looking to win their first game in Louisville, Ky. in program history that afternoon, the Eagles turned to freshman right-hander Mason Pelio in an effort to avoid a series sweep. He more than delivered. Pelio pitched into the eighth and allowed just one run, Sal Frelick and Jake Alu both homered, and BC avoided a late bullpen meltdown for a 6-4 win—its first over a ranked opponent since last March.

Pelio was phenomenal for the Eagles (8-6, 1-2 Atlantic Coast), striking out four and scattering four hits before leaving with two outs in the eighth. He retired 12 straight at one point and turned in his second quality start in a row. After his 113th pitch of the game ended in a walk to put two runners on with two outs, head coach Mike Gambino went to the bullpen, where John Witkowski emerged and got a strikeout to escape the jam.

With a healthy 6-1 lead after Alu homered to lead off the ninth, Gambino stuck with Witkowski for the final three outs, and things got interesting. The senior right-hander gave up a pair of one-out singles and didn’t help his cause with a throwing error and a wild pitch that resulted in two runners in scoring position. Louisville’s (11-4, 2-1) Danny Oriente brought in a run with a groundout, then Drew Campbell had a RBI single and Henry Davis followed with a RBI double. With the winning run at the plate, Witkowski beared down and avoided a blown save by getting Alex Binelas to groundout and end the game.

It was a stressful final frame for the Eagles, which was opposite of the first eight innings. As Pelio was cruising, BC was making sure to back him up. Frelick deposited a 0-1 pitch from Louisville starter Bryan Hoeing beyond the right field fence in the first inning to open the scoring, and Cody Morrissette followed two batters later with a RBI double. A throwing error and a balk on Hoeing set up a Chris Galland sacrifice fly in the second, then BC added two more in the fifth against Louisville’s bullpen—Galland scored on a wild pitch and Brian Dempsey stroked a RBI single up the middle.

The largely comfortable win was a stark contrast to the continuation of the game earlier in the morning. For the first three innings, at least, BC starter Matt Gill was cruising, retiring eight batters in a row heading into the fourth. That’s when the wheels came off, starting with an error committed by Morrissette. The bases were quickly loaded after a single and a walk, and Oriente opened the scoring with a RBI single. Zach Britton followed with a bases-clearing triple to left field and Zeke Pinkham brought him in with a sacrifice fly, quickly building a 5-0 lead.

Gill was chased in the following frame after allowing a one-out RBI single to Tyler Fitzgerald, but BC’s steady stream of relievers did little to stop the bleeding. Will Hesslink threw the ball away on a pickoff attempt and walked Logan Wyatt before giving way to Travis Lane, who gave up a RBI single to Oriente and a two-run double to Jared Poland. A wild pitch from the freshman brought in another run, and the Eagles were staring at a double-digit deficit in the blink of an eye.

BC couldn’t crack southpaw Nick Bennett, who spun five scoreless innings, but had better success against the Cardinals bullpen. It was much too late to mount a comeback, but Jacob Yish had a pinch-hit RBI single and Dempsey added a run-scoring double. In the ninth, down to their last out, Eagles’ first baseman Jack Cunningham slugged a two-run shot to right-center, but Joe Suozzi popped up to end the game.

The offensive troubles plagued the Eagles in the series opener on Friday night, as Detmers was dominant for Louisville. He pitched into the eighth and allowed just three hits while piling up 13 strikeouts in a starring performance. Detmers even retired 18 in a row after giving up a single to Dempsey in the first, keeping BC in check as his teammates built what seemed like an insurmountable four-run lead.

Detmers was more than a match for Eagles’ senior Dan Metzdorf, who made his first start since opening day against Jackson State. Metzdorf gave up a seeing-eye RBI single to Oriente in the first then labored through the next four and two-thirds innings, needing 79 pitches as he walked four and struck out five. The BC bullpen faltered after his exit, watching a one-run game quickly fade away from them—despite the usually reliable Thomas Lane and Joey Walsh throwing in the middle innings.

Lane had command struggles, as he walked Wyatt to open the frame before giving up a RBI double to Campbell. With a man on second, the ball really got away from Lane, as he hurled consecutive wild pitches to let Campbell cover 180 feet with ease. In the seventh, Walsh was hurt by his team’s defense, as Justin Lavey singled to leadoff, moved to second on a walk, then came around to score after a passed ball and another error on Morrissette.

While the first two games were disappointing for an array of reasons, the fact remains that the Eagles were able to salvage a game against the preseason pick to win the conference. A top-10 opponent is no slouch, and BC largely cruised in the weekend finale. The Eagles finished an even 4-4 during their spring break swing, and are now just five games removed—including a three-game conference set with Wake Forest, who was picked to finish fifth—from playing at home. Last year, BC didn’t reach the eight-win mark until March 23, but with a talented freshman class and an often potent lineup, it seems like last year’s forgettable season is firmly in the rear view mirror.