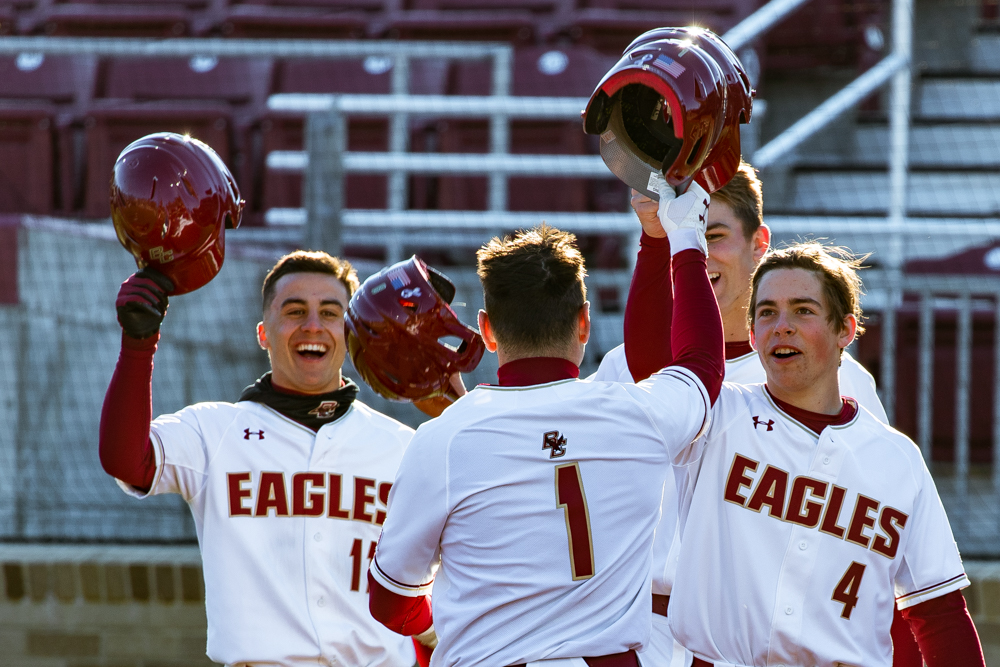 For the first time this season, Boston College baseball left fielder Chris Galland—the lone member of last year’s team to merit all-conference honors—didn’t find himself in the starting lineup. Mired in a four-game hitless stretch, Galland, who had played 14 straight, got the day off on Tuesday afternoon when the Eagles welcomed in a struggling Holy Cross side for their earliest home opener in program history.

His replacement atop the order? Third baseman Jake Alu, who rewarded head coach Mike Gambino’s confidence by going 3-for-4 with a three-run home run, powering a potent BC offense to a 11-4 win over its Massachusetts neighbors.

The Eagles (9-6, 1-2 Atlantic Coast) lineup, undoubtedly playing with tired legs after a Kentucky road trip that featured eight games in 10 days, showed no signs of rust, en route to their fifth game of the young season with double-digit runs scored. Paced by Alu at the top of the order, BC quickly erased an early two-run deficit to the visiting Crusaders (1-15) in what was a 38-minute first inning, struck for five runs in the third, and never looked back.

Alu, who started the year hitting eighth in the lineup, has steadily climbed and now boasts the second-best average on the team. He was slotted at fifth in three of the Eagles’ last four games but earned the nod for the leadoff role a game removed from hitting an insurance home run in late innings against Louisville on Sunday afternoon. Alu took the second pitch he saw from Holy Cross starter C.J. McKennitt—who was making his first collegiate start—and laced it through the right side. Two batters later, he waltzed home on a game-tying two-run double from Jack Cunningham—who also had three hits in the win—setting the tone for an impressive day at the plate.

After trading early runs with Holy Cross, BC held a slim 4-3 lead entering the third. Once freshman righthander Joe Mancini spun a scoreless top half of the third, the Eagles got to work in the bottom of the frame. Gian Martellini hit the first of his two doubles on the day to bring in a run off Crusaders reliever Luke Dawson, then Joe Suozzi brought him home with a double of his own. Then, with two outs and two on, Alu deposited a 2-1 pitch beyond the right field fence, his third home run of the year that stretched the lead to six.

Cunningham joined in on the power surge a few innings later, as he added to a strong day at the plate with a solo shot. It was also the third long ball of the year for the 6-foot-2 first baseman, furthering an unexpected trend from the Eagles: home run power. Last season, BC managed just 14 home runs in 49 games and only hit 15 the year prior. This year, though, even with an increased emphasis on speed—the Eagles have swiped 42 bases thus far, taking five of seven attempts against the Crusaders—the team has already launched 13 home runs.

With the offense firing on all cylinders, it ultimately wasn’t a problem that Eagles starter Emmet Sheehan, making just his second appearance of his debut season, didn’t make it out of the first. Sheehan showed flashes of dominant stuff but couldn’t control it, as he struck out two but worked into a bases-loaded jam after a single, walk, and hit batsmen. He exited after walking in a run, and replacement Joe Mancini replicated the feat before getting out of the jam.

It turned into your classic midweek bullpen day, with Gambino turning to Joey Walsh, Sean Hughes, Ryan Smith, and Thomas Lane the rest of the way. After Mancini left, following three and a third innings of work in which he allowed two earned runs, the back four of the bullpen combined for five scoreless innings. While control remained an issue—the Eagles pitchers walked eight Crusaders—they were able to hold the Holy Cross bats in check, limiting their visitors to just two hits after the fourth inning.

Cody Morrissette drove in two runs out of the six spot in the Eagles’ lineup, while Lucas Stalman—making his second start in three games—didn’t record a hit but drew two walks and had two stolen bases in the win. It was a well-balanced day at the ballpark for Gambino’s bunch, with seven different batters recording hits. Seven of BC’s 11 hits went for extra bases, with the friendly confines of the Harrington Athletics Village serving them well.

While Holy Cross is far from the quality of opponents that the Eagles will face in the ACC schedule—they just dropped two of three to No. 8 Louisville—a convincing win after a quick turnaround is always good for momentum. The other important takeaway? Gambino has a lineup, top to bottom, that can hit—something that was a struggle a season ago. BC finished second to last in batting average and dead last in runs scored in the conference in 2018, but, through 15 games, it’s slugging .280 (fifth) and averaging over seven runs per game (ninth).