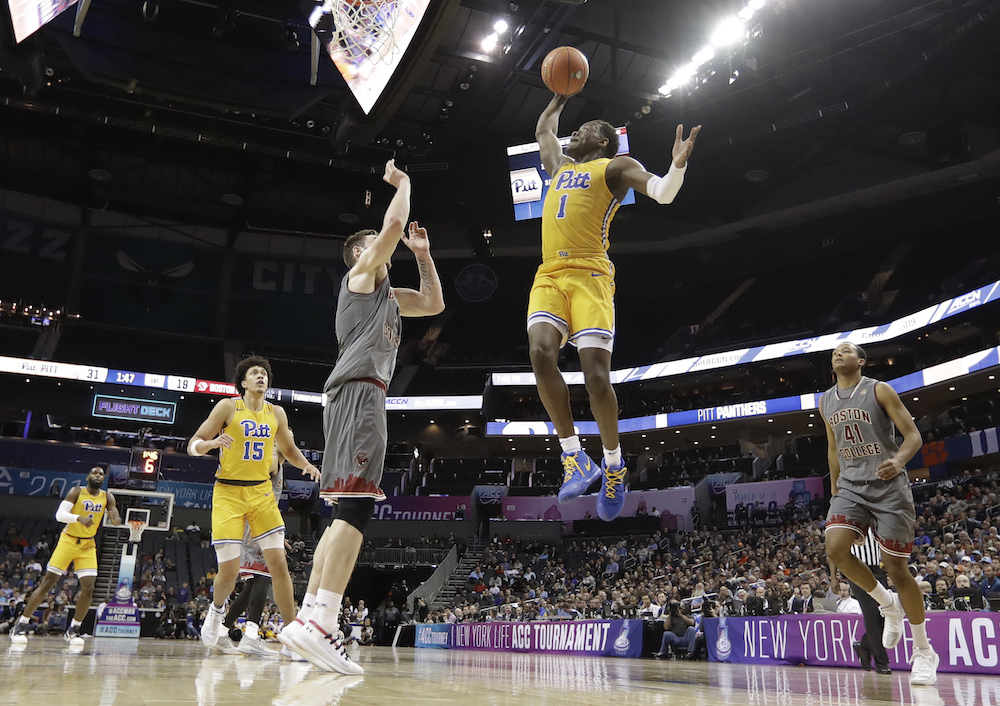 The sight of Boston College men’s basketball point guard Ky Bowman, head in hands, on the bench with three minutes left in the first round ACC Tournament game against Pittsburgh was surreal. Bowman, who played 97 percent of his teams minutes in the regular season, was reduced to vacant stares as his team prolonged the inevitable, fouling and trading buckets with the Panthers, en route to a season-ending 80-70 defeat—an outcome that was all but assured when the Eagles (14-17, 5-13 Atlantic Coast) went nine minutes without a field goal to close the first half.

The Panthers’ (14-18, 3-15) freshman backcourt tandem of Xavier Johnson and Trey McGowens, which combined for 49 points, hounded Bowman all night, and guided a team that entered having lost 13 of 14 to the second round of the annua tournament. The Panthers absorbed an opening 7-0 run from the Eagles and returned the favor, landing blow after blow as they went on a 21-3 scoring spurt and never looked back.

It was an awful season-ending performance for BC and head coach Jim Christian—the team went lifeless on offense and watched as it carried over to the other end of the floor. In the meeting between these two teams earlier this season, a 66-57 win for the Eagles, Christian’s defensive scheme worked to perfection—Pittsburgh’s guards couldn’t find their way into the paint, and it translated to a 29-percent night from the field. This time around, though, Christian didn’t have the adjustments to keep up with Panthers first-year head coach Jeff Capel.

After his team fell behind 7-0 early, committing turnovers on each of their first three possessions, Capel called a timeout and rallied his troops.

And settle in, they did. Sparked by senior guard Sidy N’Dir, who came off the bench for a layup and an and-one to close the deficit to just three, Pittsburgh began to grab the momentum. After Bowman knocked down a deep 3-pointer, one of just three shots he’d hit from the field in a shaky 14-point performance, Johnson answered by picking his counterpart’s pocket and setting up McGowens for a breakaway dunk.

Johnson would score four quick points to give the Panthers the lead, and while a pair of Jordan Chatman free throws and a Nik Popovic mid-range jumper returned it to BC, that’d be the last time the Eagles hit anything from the field in the first half. Pittsburgh’s Jared Wilson-Frame answered with a wide-open 3-pointer to tie it up, then sunk back-to-back free throws to give the Panthers the lead.

Those were the opening buckets of what turned into an 18-point swing in the Panthers favor, with the bench whipping into a frenzy while Christian could only look on in disbelief. While BC’s defense was being picked apart by guards slashing into the paint and scoring or kicking it out for open 3-pointers, the offense struggled mightily.

“The key [for] every game is attack,” Johnson, who piled up 14 first-half points, said. “I mean, last time we played them, they littered the paint, and I shot 3 for 19 from the field. Today I shot 7 for 14, and that was the difference.”

Bowman, who found early success with Popovic in the two-man game, couldn’t find his way inside and was denied any space for much of the half. While Chatman and Popovic can usually support the junior in the scoring column, neither were able to establish a rhythm, and the deficit began to mount. The Panthers held the Eagles scoreless for a four-minute stretch, missed nine straight field goals, and soon entered the locker room with their heads down and a 15-point deficit.

Things didn’t get much better out of the break, as the Panthers strung together an early 6-0 run. The lead increased to 21 after a McGowens step-back 3-pointer, and the freshman two-guard was only getting started. He was held to just nine points in the regular season meeting, but likely building off of a 16-point day off the bench against Notre Dame on Saturday, he went to work. McGowens went off for 17 second-half points, hitting a dazzling array of contested layups while also going a perfect 8-of-8 at the charity stripe.

“I thought it was the most complete game that we’ve played as far as executing the game plan defensively, understanding personnel, I thought,” Capel said. “For the first five minutes we struggled, especially valuing the ball. I think [it was] nerves a little bit. But as we settled into the game, I thought the last 15 minutes of the half and then probably the first 14 minutes of the second half, I thought we were really good.”

As the Eagles did throughout the season, they made their deficit much more respectable in the latter stages of the second half. After trailing by as much as 27, BC used a 14-1 run to close the gap, then pushed late behind a pair of 3-pointers from Popovic and strong play from Chris Herren Jr. and Jared Hamilton to narrow it to nine with 59 seconds left. It didn’t matter, though, as the Panthers sunk almost all of their free throws—they finished 23-of-32 (71.9 percent) on the game, but went a solid 14-of-19 in the second half.

Bowman was an unspectacular 3-of-10 from the field in what will very likely be his last game in an Eagles uniform. He had seven rebounds, four turnovers, and four assists in the loss, and it was puzzling to see him exit his potential farewell game after playing at least 39 minutes in all but five games this season.

The last four games of Bowman’s 2018-19 season—all defeats—reflected the crossroads that this program is at. A blowout loss in everything but scoring margin to the second-worst team in the conference reflects just how far BC has to go, NIT bid last season aside. With the heart of the program potentially ending his career sitting on the sidelines of a first-round exit, the team’s third in five years under Christian, one can only wonder if he won’t be the only high-profile departure this offseason.