Rev. Mitchell T. Rozanski, bishop of Springfield, Mass., came to Boston College on Feb. 25 as part of the C21 Episcopal Visitors Series to speak about current issues in the Catholic Church. His talk comes during a troubling time for the Catholic Church, as it is facing blowback for its handling of numerous cases of sexual abuse of minors by church officials.

Rozanski emphasized connecting faith and action in his talk, specifically addressing the church’s sexual abuse scandals, physician-assisted suicide, and the opioid epidemic. He stressed the need to “look outward” and live the Catholic faith in one’s daily life and relations with others.

“[A] Catholic institution today [can’t] merely be an ivory tower, but a place where faith and action go hand in hand,” Rozanski said.

Rozanski opened by acknowledging the sexual abuse controversy and admitting that the Catholic Church must properly address these scandals and undergo a thorough change of heart. He praised the efforts of Pope Francis in confronting the issue.

“I think it is telling that Pope Francis is calling the bishops, as well as the universal church, to our roots in addressing the evils that afflict our church and society at large,” Rozanski said.

“Let us be thankful in prayer for the continued follow-up work of the summit in Rome to become the focus of the church throughout the world, as we also remember those who have been so hurt by this scourge in our church.”

Rozanski added, though, that he thinks the church is facing undue criticism. He said that the Pennsylvania grand jury report that exposed years of sexual abuse of minors by the church stretched back 70 years, and it is not the reality of today’s church.

“In showing where the church is now, what the church is doing to prevent any type of abuse, and how the church reacts to a report of abuse, I’m hoping that will show our people that we’ve taken seriously past mistakes and that we’re working on them as best we can.”

He shared an insight from the late Archbishop Rev. Fulton Sheen, which he felt summarized the strained relationship between the Catholic Church and the American public.

Rozanski then brought up a bill that was recently introduced into the Massachusetts state legislature, the “End of Life Options Act”—commonly called the “death with dignity” bill—which would legalize physician-assisted suicide. Rozanski decried the practice as a devaluation of the sanctity of life as believed by the Catholic Church and compared it to the Holocaust.

Rozanski brought up the Nazi Germany-era propaganda film I Accuse, which presented euthanasia as a way to eliminate people who were deemed as not making positive contributions to society.

“We know well today what the Nazi ideology led to—the Holocaust, the Shoah, the murder of 6 million Jewish people, and many, many others who also fell under the Nazi definition of not being useful,” Rozanski said.

While Rozanski clarified that he was not saying physician-assisted suicide would lead to another Holocaust, he urged the audience to think about the potential slippery slope in decision-making about when to use the practice.

“Will a psychological illness such as depression be categorized as meriting consideration for physician-assisted suicide?” he asked.

Rozanski then pivoted to the United States, noting what he sees as a spiritual crisis due to a lack of understanding and living of faith.

“If we do not know our faith, we cannot live this faith and know its beauty and truth,” Rozanski said. “As coworkers in the Lord’s vineyard, we all have a responsibility to know what our faith teaches.”

Rozanski then finished his lecture by citing the opioid epidemic as an example of lack of faith in the United States, contending that it is the manifestation of deficient spirituality in a troubled society.

“Recently, much has been made over the drug, Narcan, that is a remedy for overdoses,” Rozanski said. “Surely, Narcan is a lifesaver for someone in an awful position, but we really need to reflect much more deeply on the reasons for this crisis in our country. To me, the opioid crisis is really the result of a lack of hope. It is a spiritual crisis, not merely a physical one.” 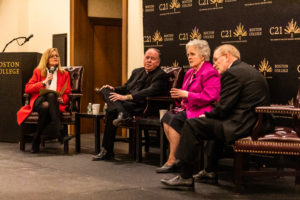