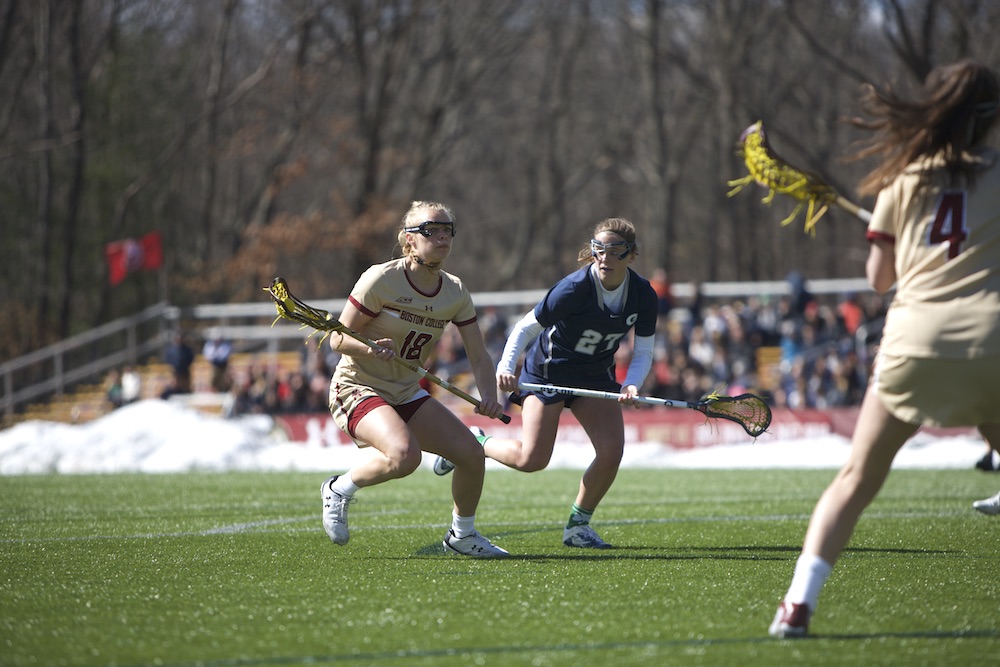 Walker-Weinstein Earns 100th Career Win as BC Dominates No. 21 Georgetown

Fifty-one seconds. That’s all it took for No. 1 Boston College lacrosse to open the scoring gates on Saturday afternoon against No. 21 Georgetown, and it was a sign of things to come from the unbeaten Eagles. Sam Apuzzo won the opening draw control, and BC raced into the attacking third before settling down and scoring on the first possession with surgical precision, as Cara Urbank deftly fed Kenzie Kent from behind the net.

Eight unanswered goals later, the Eagles were well on their way to a ninth straight win to open the 2019 campaign, cruising past the visiting Hoyas, 21-11. Crisp passing and stellar defense allowed them to easily dispatch another ranked opponent—their fifth such win—for head coach Acacia Walker-Weinstein’s 100th career victory. The Eagles (9-0, 1-0 Atlantic Coast) secured another double-digit margin of victory and topped 20 goals for the fifth time this season, as they rumbled past Georgetown (5-3), escaping a four-game stretch against top-25 opponents without a defeat.

BC’s first-half dominance only built off Kent’s quick strike, as the Eagles carved up the Hoyas’ defense, scoring eight goals in as many minutes. Kent, Urbank, and Dempsey Arsenault made Georgetown goaltender Haelle Chomo’s day a nightmare, scoring two goals apiece in the opening period. BC opened the game on a 9-0 run and built a comfortable 11-1 lead 12 minutes into the game.

Six minutes in, Apuzzo’s second goal looked like it might break Georgetown’s morale. The senior midfielder forced a turnover at midfield and broke away from the defense with nothing but open space in front of her. Bearing down on net, Apuzzo left nothing to chance, blowing a shot by Chomo with ease. Georgetown promptly called a timeout, but it didn’t quell the Hoyas’ disarray. Following the timeout, Georgetown’s offense was stifled for the full 90 seconds on the shot clock against the Eagles’ defense. During the possession, the BC defense suffocated Georgetown’s perimeter players and blanketed cutters, eventually forcing midfielder Natalia Lynch to roll the ball out of bounds in surrender.

The Hoyas eventually settled down defensively and deserve a tremendous amount of credit for the adjustments they made. Despite staring down a monumental deficit, Georgetown fought back, and in the last 15 minutes of the opening half, the Eagles were held to just two goals. BC still entered the half with an eight-goal lead, but it was clear the Hoyas weren’t just going to fold. Liza Liotta, Francesca Whitehurst, and Lynch led the charge for Georgetown, as it closed the first half with a 4-1 run and headed to the locker room down, 13-5.

Georgetown’s first-half momentum carried into the opening minutes of the second period as well. The Hoyas’ Morgan Ryan and Whitehurst scored two quick goals, cutting the Eagles’ lead to six. BC’s Sheila Rietano ended the Eagles’ scoring drought with one of her four goals, but Ryan responded again with what was the most impressive goal of the game. Ryan caught a cross-crease pass from Jordyn Sabourin and whipped the ball behind her head and into the cage.

Georgetown’s momentum didn’t last as long as it needed to, though, as the Eagles stole back the spotlight in the last 15 minutes of regulation. They scored quickly and often, giving Georgetown’s replacement goaltender, Micheline Denardo, a major headache. Apuzzo, Rietano, Jenn Medjid, and Arsenault combined for five goals in a six-minute span. Medjid scored the dagger for the Eagles off a quick cut to the front of the net to put the Eagles up 11 with six minutes to play.

In the final stages of the contest, both teams emptied their benches and played their young talent. BC freshmen Courtney Weeks and Caitlynn Mossman were responsible for some solid play down the stretch.It was an emphatic home victory for the Eagles against a talented Georgetown squad. Abbey Ngai finished with seven saves and Rietano, Apuzzo, Medjid, and Arsenault all recorded hat tricks.

It was a fitting game for Walker-Weinstein to hit the century mark, a head coach who has built a formidable program in her seven-year tenure. When she was promoted to head coach back in 2013, the Eagles were coming off a 10-8 campaign and had never won more than 12 games in a season. Now, as this latest convincing win over a quality opponent shows, Walker-Weinstein has assembled the odds-on national title favorite that’s bursting at the seams with talent.