Home » Firmly on Hot Seat, Christian Has Plenty of Things to Fix 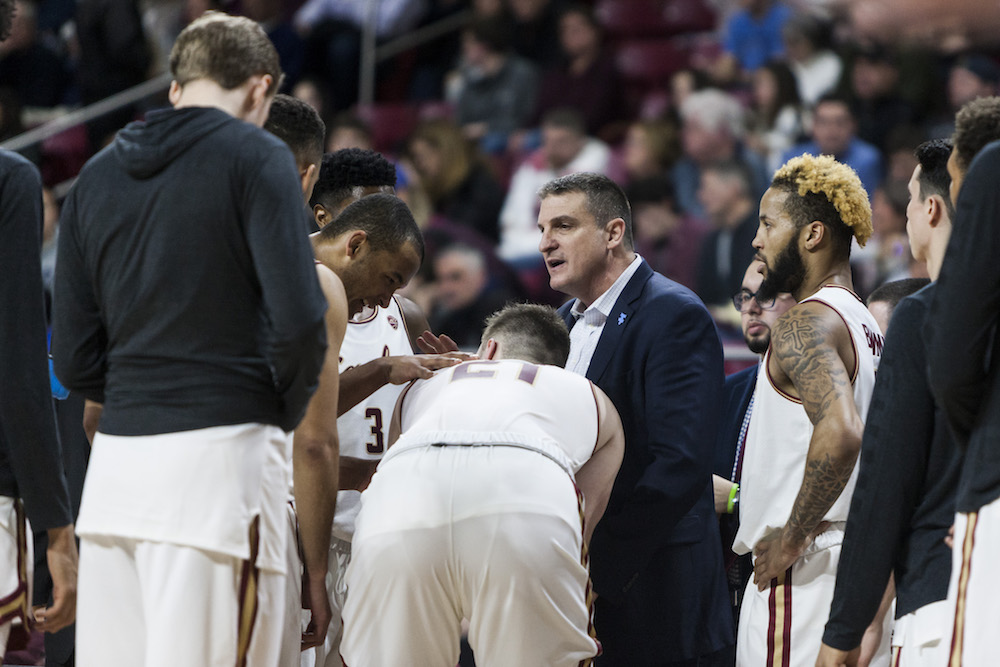 Firmly on Hot Seat, Christian Has Plenty of Things to Fix

Sunday night was a time of hope and celebration for 68 fan bases scattered across the country, whether it was perennial title contender Duke or small town Prairie View A&M, as they heard their names called and were seeded in the NCAA Tournament. In Chestnut Hill, Mass., however, fans of Boston College men’s basketball found their team slotted in a different bracket: ESPN’s College Basketball Misery Index, as the No. 2 seed no less.

Using a formula consisting of seven factors, ranging from championships to tournament berths to heartbreaks to comparisons with rivals, ESPN found that just six other programs—a group headlined by Wake Forest, the No. 1 overall seed in the bracket—had experienced a tougher go of it in the last decade-plus. BC won the Big East regular season back in 2005 and made a famous run to the Elite Eight back in 1994, but ever since it dropped a tough overtime decision to Villanova in the Sweet 16 in 2006, the Eagles have slumped.

It’s now been 10 years since they made it into the tournament field and a dozen since they won a game on the sport’s biggest stage. Head coach Jim Christian’s fifth year in charge was a dramatic step backwards—even though BC lost Jerome Robinson to the NBA, it returned four-fifths of its starting lineup and welcomed in a recruiting class filled with potential—as BC managed just five conference wins, regressed on both sides of the ball, and lost six of its last seven games.

It was a far cry from the optimism around the program coming into 2018-19, as Christian’s side, despite losing Robinson, lined up well in the preseason. They returned future NBA point guard Ky Bowman and surrounded him with an interesting supporting cast—a veteran sharpshooter, a prototypical European big man, a similarly explosive guard, a rebounding- and defensive-focused four, and a top-100 recruit who could space the floor. While the Eagles were picked to finish 12th in the preseason ACC Coaches Poll, many on campus expected a higher finish—after all, BC finished in the same spot last year in a tougher overall conference and the Eagles had let four of their last five games get away from them.

Jim Christian’s season-by-season record at BC:

A 14-win season was an incredibly disappointing outcome, especially considering the steps the program seemed to have taken the year prior. Sure, the Eagles technically surpassed the league’s expectations by finishing 10th, but they managed just five wins in conference—as opposed to seven last season—and regressed in plenty of major categories. The offense slumped 50-plus spots in the national rankings, falling from 52nd in offensive efficiency to 110th, and the defense slid six spots to 134th. As a comparison, five other teams in the ACC rank outside the top 100 in either offense or defense, and BC managed to go just 3-4 against them.

So, with all of this considered—a failed year aside—what exactly does Jim Christian need to do to avoid an inglorious exit before his contract expires? He’s had all the time in the world to rebuild a struggling program, he has his type of players here, and he’s proven adept with his staff on the recruiting trail. The first thing to take a long, hard look at it is the defensive gameplan Christian tries to implement.

Game in and game out, BC repeatedly breaks down on the defensive end of the floor. How the Eagles do so has changed during Christian’s tenure, though, in the most frustrating way possible. Last year, the Eagles were repeatedly torched from long range, leaving shooters wide open after failed switches or lackadaisical coverage, and it translated to opponents shooting 36.1 percent from distance, 239th in the country. This year, that mark has plummeted to 31.9 percent, the result of a more concerted effort, but opposing teams have still opted to shoot from beyond the arc on nearly 41 percent of their possessions. It’s not like they can’t get inside pretty easily, too. The first-round loss to Pittsburgh demonstrated the Eagles’ lack of a rim protector, as the Panthers’ duo of Trey McGowens and Xavier Johnson attacked the lane at will.

A part of this can be attributed to the inconsistent approach that Christian takes. Opposing teams either saw a man-to-man defense or a 2-3 matchup zone, and he tried to switch between these two to no avail. The Eagles’ defense never seemed to be fully ready for their opponents and lacked the ability to make mid-game adjustments—just look at some of the numbers players and teams put up on them. For instance, Georgia Tech’s anemic offense, which finished the year ranked 219th in the country, averaged 1.21 points per possession on Mar. 3 in an overtime win.

What’s baffling is how little Christian gets out of his defense. Steffon Mitchell—who we’ll discuss more in a second—is an anchor with the ability to defend practically every position. He’s the only player that manages to turn in a great effort every game, while the rest of the defense seemed to float from spot to spot on the floor at times. Jared Hamilton showed flashes of being an excellent perimeter defender, but Christian hasn’t been able to get much down low from Nik Popovic and Jairus Hamilton, while Bowman and even Wynston Tabbs at times reflect high-usage scorers that just want to have the ball back.

The Eagles haven’t been a good defensive team in a decade, failing to crack the top 100 in KenPom defensive efficiency since 2006. Coincidentally, that year was the same as a Sweet 16 run, so to find success in a difficult ACC, Christian needs to solve his defensive woes. He found success at Kent State in the early 2000s on the back of a top-50 defense, and if he wants to salvage his job here, it should start with restructuring how he coaches his defense.

On the other end of the floor, the Pittsburgh loss revealed another glaring flaw with Christian: He places a lot of faith in one or two key players to carry the team to victory. This is especially problematic when people have off nights, like Bowman did, as the rest of the team doesn’t necessarily get going. The offense has a lot of pieces that should be able to mesh well with some creativity—Mitchell is an example of someone who Christian needs to develop offensively, because while he plays a crucial role on defense and is the best rebounder on the team, he can barely score and that makes the team easier to defend.

When you discuss the development of players, though, you run into another problem—Christian really hasn’t been able to run with a deep rotation since he arrived on campus, and this has created a backlog of players that aren’t capable of meeting the demanding style of ACC play. The Eagles have been firmly outside the top 200 in bench minutes in four of Christian’s five years, with the lone exception the winless ACC season in 2015-16 and that was partially the result of norovirus that wiped out two-thirds of the team. This year, they finished 221st, with players like Johncarlos Reyes, Luka Kraljevic, Vin Baker Jr., and Avery Wilson all struggling to have any impact off the bench. A part of their inability to grow and play a bigger role has to partially be blamed on Christian, with Baker, Wilson, and Reyes all largely failing to touch the ball when they got a minimal chance.

There’s a lot of other things that Christian needs to work on as a coach, but the biggest thing that he likely doesn’t have an answer for is how he squandered the ACC’s best backcourt in 2017-18, then failed to find any semblance of consistency in 2018-19. He finds himself in a eerily similar position as another head coach who’s had his share of struggles in Chestnut Hill: Steve Addazio.

Like Addazio, Christian has found himself firmly in the hot seat, with rumors swirling regarding whether he’d return to the sidelines of Conte Forum. The ending of basketball felt eerily similar, albeit less disappointing all things considered, to BC’s football team, which had high hopes at one point—a top-25 ranking and College GameDay comes to mind—but closed the year on a slide. That prompted endless questions about the status of Addazio, but athletic director Martin Jarmond put them to rest on the Tuesday after the regular season finale, handing the coach who can never seem to escape the cycle of seven wins a year a two-year extension.

As evidenced by the lack of reports out of the athletics department, Christian, who last April was rewarded with a two-year extension after a season that featured two wins in the ACC Tournament and a berth in the National Invitational Tournament, will be back for at least next season if not for the entirety of his contract, which runs through 2021-22. Understandably, Jarmond’s decision not to buy the coach out has been met with disappointment from many fans of the program.

Jarmond has now chosen to leave the school’s two most controversial coaches at the helms of their struggling teams, and only time will tell if Christian can make the necessary adjustments  next season. Likely losing Bowman alongside his backcourt mate and sharpshooter Jordan Chatman will sting, but the Eagles have intriguing pieces and a strong incoming recruiting class. It’ll be up to Christian to evolve and save his reputation after piling up 100 losses in his first five years in Chestnut Hill.