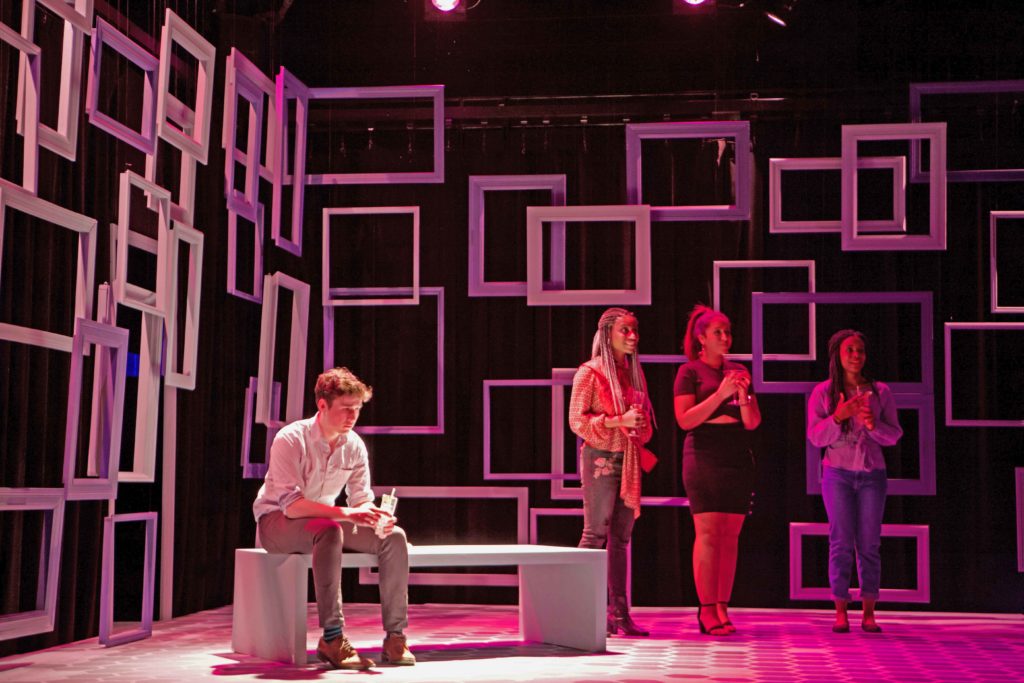 Self-deprecating quips, catty small talk about colleagues, and the struggle that comes with navigating the difficult waters of adult dating all pop up throughout Significant Other, a surprisingly deep comedy that lit up the stage with a bittersweet commentary on growing up and dating in the modern age.

Performed in the Bonn Studio over this weekend, Significant Other, written by Joshua Harmon and directed by Nick Swancott, MCAS ’19, brings a new perspective on love and dating to Boston College, as the play follows Jordan, a gay man in his late 20s, looking for love in New York and encapsulates the hopes and fears found in modern dating, commenting on the expectations of needing to find that one special person.

Judging by the start of Significant Other, the audience would not expect to be crying by the end. Opening the show is a light-hearted bachelorette party for Kiki (Juls Martinez-Alvarez, MCAS ’21), where the main character Jordan (Miki Peiffer, MCAS ’19) and his two friends Laura (Debbie Aboaba, MCAS ’21) and Vanessa (Lyana White, MCAS ’20) drink and talk about relationships—mainly the lack thereof. As the play progresses, the audience follows Jordan’s (sometimes desperate) attempts to find love, while the friends who sympathized with him at the beginning of the play find their own significant others, Jordan feels increasingly alone.

Significant Other explores the difficulty of having no one to commit to, despite a willingness to commit—a different angle than many other plays focusing on love. Examining the expectation that “everyone has their person,” Significant Other shows how the real dating world is much less idyllic, filled with awkward moments, rejection, and disappointment.

The dialogue of the play is natural and humorous, and often prompted bouts of laughter from the audience. The characters are hilarious but at the same time recognizable, as each has their distinct personalities and archetypes but also feel like people in our own lives. The setting is modern and familiar, with the characters speaking like real people and going through things that everyone can relate to, like having a crush on someone at work, or sending a risky email that didn’t pay off. Significant Other also makes commentary on the experience of dating as a gay man and how that poses specific difficulties in contrast to the more successful love lives of his female friends.

Beyond just dating, Significant Other also tackles the terrifying idea of growing up and seeing your friends outgrow you and move on with their lives, and how meeting people and making friends is so much harder once you’re in the real world. Showing the progress of Jordan and his friends through their late 20s, when people begin to settle down, Significant Other can strike a chord with college students who may see their friends finding significant others and be feeling left out, or that something is wrong with themselves. The play is also a commentary about isolation and loneliness and the feeling of inadequacy when one feels alone.

The show is presented through the lens of Jordan. With the exception of the wedding scenes, everything unfolds as stories that Jordan is telling to his friends, with different parts of the stage lighting up to show both the present time and the past events that have transpired. As a result, the show has an interesting continuity, where all the events that Jordan is recounting have occurred before, and the audience sees his stories through his perspective at the same time as his friends do, making the audience an extension of his friend group.

Jordan’s grandmother (Hadley Durkee, MCAS ’20) stole the show. Appearing from time to time on one warmly set-up corner of the stage, Jordan’s grandmother remains a constant in Jordan’s life, telling the same stories and reassuring Jordan that everything will turn out well, while Jordan’s countenance changes in each encounter with his grandmother, showing his increasing anxiety and sadness.

Also notable were Benjamin Errichetti, MCAS ’21 and Ray Norville, MCAS ’20, who played different characters at different times. With their change in countenance, accent, and wardrobe, the audience had no trouble distinguishing the many different characters the same two actors were meant to represent.
Significant Other does not have a perfect ending, but perhaps that’s what makes it so genuine. Nothing is always going to turn out just the way you want it to—that’s just life.