‘All My Favorite People’ and More New Singles

“Saint Honesty,” the latest single off Sara Bareilles’ upcoming album Amidst the Chaos, puts her powerful voice on full display. The song’s introspective nature and serious sound give it a moody feel, but the lyrics are really what drives it home. Simple lines like “Salvation is coming in the morning” are reassuring and give the listener a spiritual aspect to ponder.

The song compares life—with all its ups and downs, sunny days and cold, windy nights—to a rainstorm. Bareilles sings about leaving the window open so they can feel the rain instead of just watching it from the “dry and warm” indoors.

The concept of rain as a cleansing power is a common theme in music and art as a whole. It’s illustrated in lines, such as “Let the rain wash away these tears” and “Build our own higher ground / When the rain’s coming down” and is striking similar to Taylor Swift’s “Clean,” off 1989, which featured the lyric “The rain came pouring down / When I was drowning, that’s when I could finally breathe” in its chorus.

“Saint Honesty” follows the release of “Armor” and “Fire” in anticipation of Amidst the Chaos’ April 5 release. “Saint Honesty” might be too slow and pensive for success on the radio, but it surely has the same depth and cathartic power that made her previous hits such as “Love Song” and “Brave” so popular.

Thomas Rhett has the ability to churn out hit after hit, and each one seems to better than the last. On an objective level, “Don’t Threaten Me With a Good Time” is a pretty low-quality song. The lyrics are ridiculous and have little to no substance, and it’s a little too auto-tuned to really be considered country music at all. However bad the actual quality of the song is, though, it’s a blatantly fun and catchy song. It toes the line between country and pure pop and has an upbeat rhythm that can easily put a smile on anyone’s face. Additionally, Karen Fairchild of Little Big Town’s vocals do add some substance to the second verse. The whole song is energetic and sounds like a party—so, even though Rhett has released better songs, this one will have no problem shooting to the top of the charts and probably staying there throughout the spring.

“All My Favorite People” might be Maren Morris’ most country-sounding song to date. Adding Brothers Osborne to the mix gives Morris’ latest single the perfect amount of twang, a steady, catchy beat, and fantastic guitar solos. The song’s laid-back lyrics aren’t polished and uplifting like Girl’s other tracks, but they make this one shine. Lines like “Not everyone’s going to find clarity / in a back porch sittin’ kind of therapy / with a little bit of wine, John Prine, and Camel Blues, oh no” give the song just enough detail while still retaining its catchy, rock-n-roll edge. 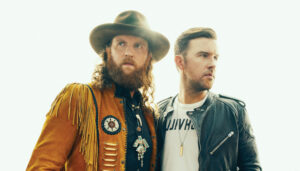