If you don’t already know the band Wallows, you definitely will soon. Wallows is a band comprised of three California alt-rockers, including lead singer Dylan Minnette—who is more widely known for portraying Clay Jensen in 13 Reasons Why. Braeden Lemasters and Cole Preston finish the triad, and these three young musicians released their debut album, Nothing Happens, on Friday. With a sun-drenched Californian sound, it’s a welcome change to the cold of Boston, which will elicit a variety of emotions as Wallows takes listeners through what could be the soundtrack to a coming-of-age movie (in the Lady–Bird-not-American–Pie kind of way).

Although only recently releasing their debut album, Wallows has been together for nearly a decade—their music first started to gain popularity after Minnette starred in 13 Reasons Why on Netflix. Wallows’ singles “Pleaser,” “Uncomfortable,” and “Sun Tan” were released in 2017, with “Pleaser” gaining the most listening of the three on the Spotify charts. Since then, the band released an EP Spring in 2018 that took a slight departure from its past sound. A final two singles released in 2018—“1980s Horror Film II” and “Drunk on Halloween”—preceded Nothing Happens, and naturally most closely resemble the album’s sound, which shifts away from guitar-heavy, fast tracks to a more diverse selection of sounds.

From the more indie-rock-sounding songs such as “Are You Bored Yet?,” “Sidelines,” and “What You Like,” to the slower, more serious sounds of “I’m Full” and “Do Not Wait,” the sound of Wallows’ debut album is a well-rounded and diverse one. With whimsy, atmospheric sounds and the dreamy, hazy-sounding voices of Minnette and Lemasters, Wallows’ indie persona is apparent on this album, backed by their talented rock instrumental music. “Scrawny” in particular reflects the previous sounds of the older Wallows music, with fast-paced, upbeat guitars and lyrics that parallel the sounds of “Pleaser” and others. What sets the album apart is that none of the tracks sound stale—each is unique and offers a fresh update to the older sounds that the band’s following first latched onto.

The 11-track album must be listened to straight through, since it progresses seamlessly from one track to the next—a particularly smooth transition comes between the first song, “Only Friend,” and “Treacherous Doctor,” which moves without a pause. Many of the songs flow without a hitch, and if you weren’t paying attention, you could miss the transition between songs.

The album represents the relatable experiences and emotions felt by young, slightly awkward kids as they detail the emotional ups and downs of love, life, friendships, and in all the other roller coaster feelings of being in relationships and reflecting back on past ones.

In “Only Friend,” Minnette’s pining vocals convey the loneliness felt by the missing of a close friend, serving as an easy transition from the older songs of Wallows, the group transplanting its earlier 1980s-sounding melodies into its new album.

The all-too-relatable feeling of apprehension for a new relationship after coming out of a long-term one is clear in “Are You Bored Yet?,” the first single off Nothing Happens. An overall theme evident in many of these very honest, authentic lyrics is the nature of someone going through a transitory period of their life, experiencing with it the feelings of loneliness, confusion, and nostalgia for the past simultaneously.

Nothing Happens is definitely worth a listen (or two… or more), thanks to the great range of emotions it brings forth in the listener. With tongue-in-cheek lyrics, incredibly relatable themes, and an underlying quiet optimism in the music, one can’t help but feel a little bit more inspired after listening to Wallows’ extremely promising debut album. Nothing Happens is set to be a breakthrough album for Wallows. 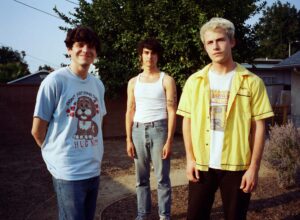