People gathered behind the building at the intersection of Washington Street, Boylston Street, and High Street at 7 a.m. on Saturday. As they walked up, people in black windbreakers asked if they were there for adult-use marijuana, and handed them a menu. People walked through the organized lines and waited for 9 a.m. to hit.

New England Treatment Access (NETA) opened up for recreational use this weekend. The Brookline Village shop is the second storefront to open under the NETA name—the first one is in Northampton, Mass. This shop is the first to open that is easily accessible by public transportation and it is the closest recreational dispensary to Boston.

NETA has been operating as a medicinal dispensary since February 2016, but wanted to expand to the recreational market to give more people the opportunity to experience the “relief” that marijuana can provide, according to Amanda Rositano, the director of Operations and Compliance for NETA who joined the company in March 2014.

People use marijuana for anxiety, pain, cancer, and more, she said. Some people who would be eligible for medicinal use might not want their name to be on a registry, so a recreational shop would allow them to get help without having it on the record.

Some people did not want to give their names, as they feared that someone from work would see it, or that it would hurt their chances for future jobs. The stigma that is still attached to marijuana, even though it has been legalized for adults over the age of 21, is something that NETA is trying to combat, Rositano said.

“We believe that really providing unfettered access to cannabis to adults who are 21-plus makes it easier for people who need it to access it,” Rositano said. “So I think a lot of people who are coming here, even on the adult use side, are folks who are looking for relief. Our mission is really to improve the health and wellness of the people of Massachusetts through education and the use of cannabis.”

The people who come into NETA are incredibly diverse, Rositano said. Everyone has to be over 21, but they’ve had people in their 90s come into the store. There is no typical customer.

“We’re from Boston and we just got the word of the first 21-plus recreational [dispensary] so we just wanted to try it,” said one customer, who declined to be named.

The shop was alright, but she probably won’t come back again, she said. It’s too expensive.

When NETA decided to transition to a recreational facility, there wasn’t any blowback from the community around them, she said. There was some uncertainty from residents when they wanted to open in 2014 as a medicinal dispensary, because of a lack of information about what it would be like, Rositano said. NETA has since established itself and proved that it operates responsibly, she continued. People in the community were more comfortable with NETA transitioning to a recreational facility because they were already familiar with the company.

The transition to recreational has made NETA increase production to make sure it has enough on the menu for everyone new coming into the stores, expand the staff, and change the infrastructure on the inside of the stores to ensure that there are more sales stations. NETA has added more products, but that’s something it is always looking to do, Rositano said. All products are available to medicinal customers, and there are some things on the menu that are only available to medicinal customers.

The location in Brookline Village is optimal for NETA because it’s right on the D line, it’s close to a lot of hospitals, and it’s on a main street, Rositano said. NETA has worked closely with the community of Brookline, she said, including town officials, town departments, and the police department.

T service to Brookline Village has been replaced with shuttle service, though, beginning last Saturday. It is part of a track and signal improvement plan that the Massachusetts Bay Transportation Authority had in place prior to the announcement of the opening. The shuttle service will run on weekends and weeknights until May. Visitors who want to avoid the shuttle can take the E line and then walk, or take bus route 66.

NETA plans to open a third location in Franklin, Mass., where its cultivation facility is. NETA cultivates everything that it sells, Rositano said. 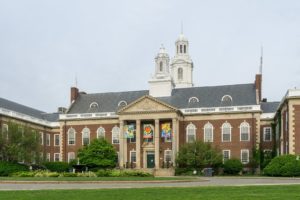