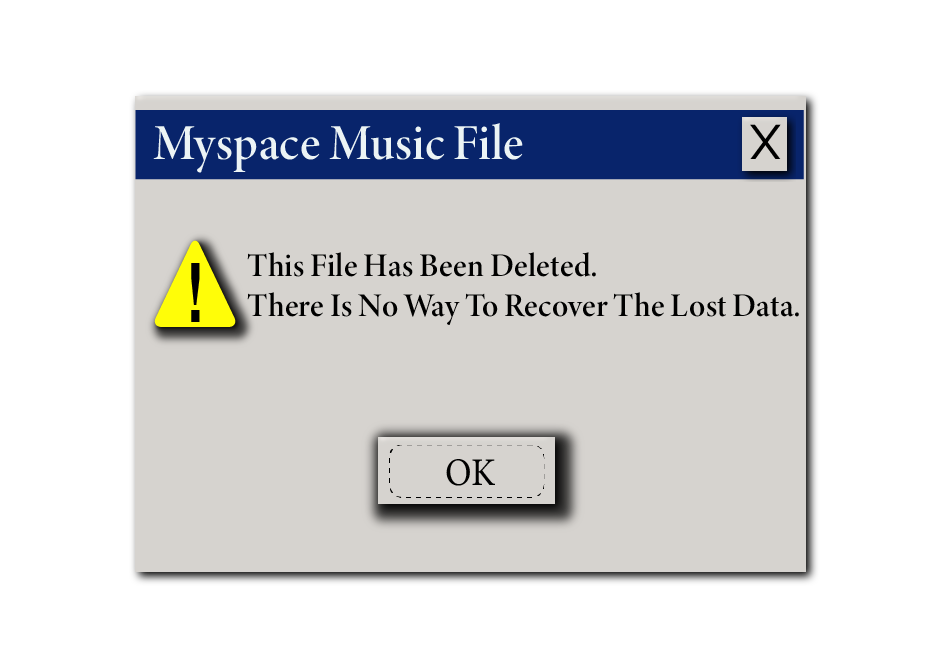 “Post it on the internet, and it’s stuck with you forever.” This is the logic that has defined our lives in the .com era. Our fundamental understanding of the internet rests on the idea that once you relinquish a thought, picture, or document to the internet, the control over that piece of intellectual (or in some cases unintellectual) property belongs to the nebulous virtual public forum that few truly understand, but in which the masses put their unwavering faith.

So when Myspace announced on Monday that the popular social networking site had lost 12 years worth of content spanning from 2003 to 2015, our basic understanding of the Internet as “forever” was not only challenged, but refuted entirely.

If you have taken a tech class, run a business with a website, or watched Silicon Valley, you may have been acutely aware that the internet, although free for consumers, is not free for businesses. When responding to an email from a user inquiring about music that couldn’t be streamed on the platform, Myspace’s legal team stated that the files were lost due to “a server migration” that corrupted the files when they were transferring content to the company’s updated site. Andy Baio, the former chief technology officer at Kickstarter, however, was quick to speculate that the company no longer wanted to cover the expenses of storing such large and likely unprofitable masses of data on an internet server. According to Rolling Stone, reddit users discovered the inaccessibility of certain tracks eight months ago, but popular news outlets did not pick up the story until this weekend when Baio tweeted about it. Semantics, nonetheless.

What was truly shocking about the email was the sentence that followed the jargonistic explanation: “There is no way to recover the lost data.”

As a former Myspace user myself, I am glad that whatever remnants of my shiny braces and puffy hair have been effectively erased from the internet. But as society’s digital dependence seems to be on an endless upward trendline, the Myspace debacle presents a serious issue for those who have adopted the assumption that the Internet will store their precious belongings indefinitely.

For the music industry, this is a particularly challenging issue.

It’s no secret that streaming services have struggled to make their business models profitable: SoundCloud very publically cut 40 percent of its staff and closed its San Francisco hub in 2017 in an effort to become profitable, an attempt that has yet to be rewarded well into 2019. On Feb. 6, 2019, Spotify announced in a press release that the company’s operating income, net income, and free cash flows were positive for the first time in its 13-year history. But don’t buy stock with your extra meal plan money just yet: The music streaming behemoth is reportedly forecasting losses of up to $409 million for the 2019 fiscal year. Apple reported revenues for its services—including Apple Music, Apple Pay, iCloud, and the App Store—reached an all time high of $10 billion in 2018, but it is uncertain what percentage of that revenue can be attributed to the company’s streaming service, a platform with just over half of the volume of Spotify’s paid subscribers at 50 million.

Long story short (and more importantly finance jargon aside), music streaming is not as lucrative as one might expect based on Spotify’s Times Square banners or exclusive listening parties. And while it is expected that Apple Music and Spotify will be around as long as we have iPhones in our pockets, a healthy skepticism of internet streaming isn’t completely unreasonable, especially in the case of SoundCloud.

SoundCloud has built up a reputation for being the internet equivalent of the underground music scene by virtue of its millions of tracks by no-name artists trying to make it big (some of who actually might make it big, as was the case with Lil Yachty and 6ix9ine). Although the app has certainly increased user value by introducing current names such as The 1975 and Arctic Monkeys—a band whose early career was aided by none other than Myspace—to its catalog, veterans ranging from The Beatles to Jay Z have yet to buy into the platform. But really, the only artists who have something to lose are those whose records aren’t romantically displayed on the walls of Urban Outfitters, the unknown artists who have to put their faith in digital platforms.

So what happens when a streaming giant, trusted by artists and listeners alike, decides it no longer wants to pay the hefty fine for data storage on an app that can’t consistently turn a profit? Music is lost forever, as was the case with Myspace. At the expense of sounding like a luddite, I leave you with some sage advice: If you like a song that was far from the top 40 in its time, it might not be the worst idea to back it up on a CD, cassette, or even just scrawl the lyrics on some thin scroll and bury it deep in a remote desert to be discovered in a thousand years. Who gets to say what stays forever anyway?