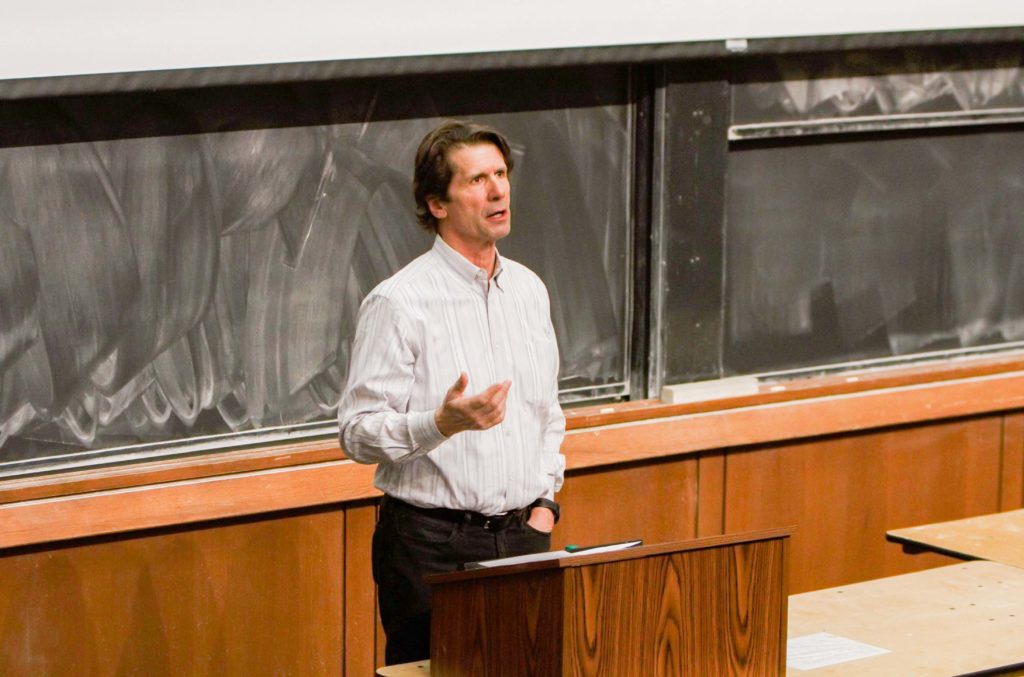 Earth, air, fire, water. In The Human Element, producer James Balog, award-winning photographer and BC ’74, argues that nature’s four known elements combine a fifth, unlikely element to create the world as it is today. Humanity, he argues, can no longer be left out of earth’s elemental equation.

The Human Element, directed by Matthew Testa, comes directly off of the success of Balog’s first film, titled Chasing Ice. Chasing Ice, a 2012 documentary, explores Balog’s Extreme Ice Survey, which he started in 2005. By setting up a series of time-lapse cameras across the world, he captured the essence of Earth’s rapidly deteriorating glaciers, showing just how much the Arctic landscape has melted and changed in an era of heavy carbon reliance.

Now, Balog makes his way back to his alma mater. And though the distinct differences of his many interests—photography, mountain climbing, earth sciences, to name a few—seemed like a mash of seemingly unrelated subjects, Balog has the Emmy award and a New York Times photo credit to prove his success. Still, he acknowledges that life didn’t really make sense at first, especially with a foothold on the edge of a mountain, but also a handhold on a camera.

“There’s no clear formula or plan,” Balog said in reference to combining his disparate disciplines.

But, with a camera in hand, Balog went on to pursue photography for real in 1977. And now, seated in Devlin 008 with decades of photography and two movies under his belt, Balog seeks to tell the story of how humans are altering nature.

The film is neatly sectioned into each of nature’s four elements. For each element, Balog incorporates stills he shot with filmography—a surprising shift from the motion of his subjects to a stationary shot. The stills he integrated into the film struck viewers—throughout the screening, the silence of the still shot on the screen was often accompanied by sighs and sounds from the crowd, evidently thinking about what exactly each photo showed.

The characters in Balog’s film made the humans’ effect on nature much more intimate and captivating. For each element, Balog chose to follow people from across the country personally affected by climate change. In California, Balog accompanied a group of CAL FIRE firefighters during the Soberanes fires in Monterey County. The 2016 fires killed a bulldozer operator—a Balog photo of his memorial and interviews with firefighters close to him displayed the casualties of the wildfires.

For the “earth” portion of the film, Balog trekked to Pennsylvania and Kentucky, interviewing his own father and other local coal miners on the impacts of new renewable forms of energy on the coal industry. And for “air,” Balog sent a weather balloon, which soared to almost 100,000 feet, to capture pictures above Earth’s breathable atmosphere. But, it was during the “water” portion that Balog’s film took off—and it came together with a simple question in which Balog asked himself: “How are we going to tell the sea-level rise story?”

To accomplish a monumental task, Balog focused on Tangier Island, a residential island on the Chesapeake Bay that is on track to disappear in a few decades. With Balog’s expert photography and effective sound bites from Tangier residents, he explained the life-threatening effects of a rising sea-level—Tangier’s residents have nowhere to go, as the Bay continues to flood the island, even on sunny days.

Using photography and film, Balog shows an Earth rapidly deteriorating due to climate change in The Human Element.

Though he has no concrete plans to create a third film, Balog isn’t done yet. His next stop: Greenland, he said. Something in his bones is telling him there are more photos to capture.