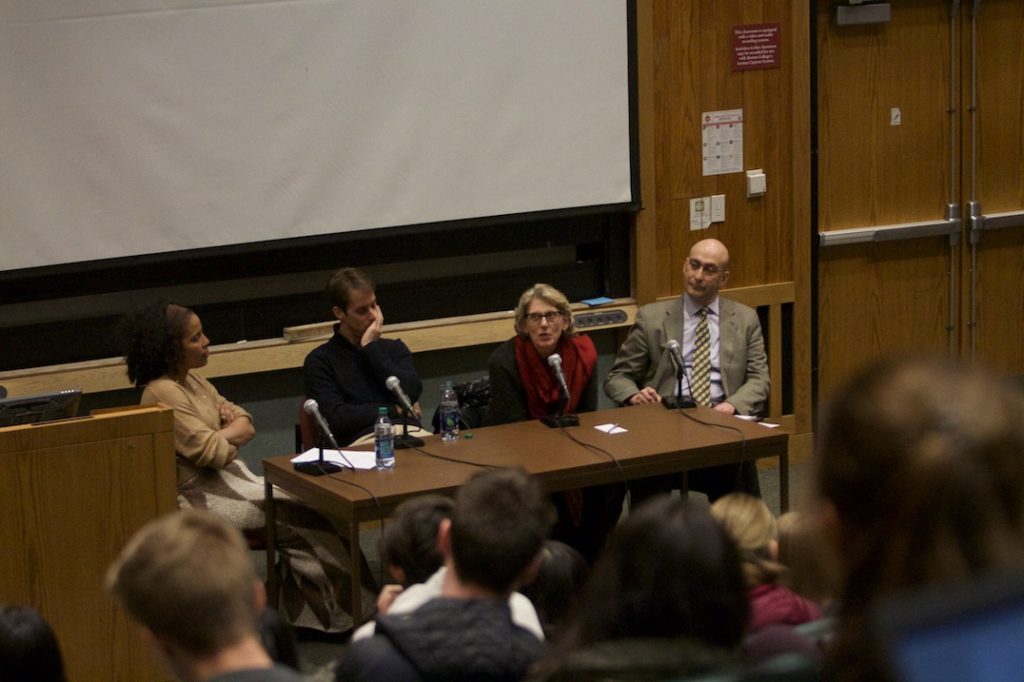 The talk was moderated by Tara Gareau, acting director of the environmental studies program and a professor of the subject, and it featured BC professors from various disciplines: Jeremy Shakun of Earth and environmental sciences, Juliet Schor of sociology, Nichola Minott of international studies, and Rev. Andrea Vicini, S.J., of the School of Theology and Ministry.

Gareau started off by reviewing the dramatic changes that the planet has seen since the industrial revolution. Since 1880, global temperatures have gone up 1 degree Celsius on average. Though seemingly minute, this increase has had major consequences such as a significant rise in sea level—a major concern for cities along the coast, she said.

Minott stated that she initially approached environmental issues in an economically oriented way, but after taking an intro course in graduate school called Environmental Resource Policy and Studies, she realized that the problem was much bigger than simply economics.

She emphasized her identity as also playing a role in motivating her decision to focus on the issue of climate change.

“I was born in what’s termed the Global South,” she added. “I am a woman of color. I am from a different socioeconomic background from many other experts in the field.”

Shakun said that he started college as a biology and philosophy major, until an environmental science course drew him into the area of study. Noting that his emphasis was more on the statistical, scientific elements and broader ideas of the field, he admitted that he was somewhat slower to connect with everyday people on the issue.

Shakun’s work has made it easier for him to contextualize what is currently occurring and what could occur in the future.

“I spend all day long studying past earths that were totally different than the current earth that we all know and is familiar,” he said. “I constantly visualize the planet when it was totally different, when sea level is above the ceiling, when climate is rapidly jumping. That has made me look at the future and be comfortable with the idea, or be able to conceive of the idea, that things can get wild—quickly.”

Shakun noted that, though there were rapid changes in temperature in the past, those changes were regional and punctuated. What is occurring today is unprecedented, he said, because the temperature is not only climbing faster than ever before but continuously and on a global scale.

Schor said that her work in the field stems from her experience growing up during the 1980s. She said that, in that time, people believed that there was no limit to the planet’s resources and that the entire world should be able to become as prosperous as the United States. When she married someone from India, she began to understand how much of an impact human actions were having on the globe, she said.

Vicini called upon Jesuit values, such as caring for others and reactions to injustice, when discussing his work and his thoughts on climate change. Care for others, the health of others, and a common world have been important to him in consideration of the problem of climate change, he said.

The talk transitioned to the grim possibility of a future where no action is taken to reduce carbon emissions entering the atmosphere. Shakun addressed the audience, saying that if one of them were to be dropped into the year 2100—a setting in which the planet is 4 degrees Celcius warmer—it would be totally unrecognizable and disorienting.

Schor traced the reasons behind policy inaction back to monetary motivations.

“We have to identify the interests within business and government, which have been stomping a path to decarbonization,” she said. “There’s a part of it to me that’s incomprehensible—that you would rather burn up the world, burn up any possibility of a decent future for your own children, and their grandchildren and their children, just so you could make more money—having already made the most phenomenal levels of money in all human history?”

Schor said that companies can pervert the conversation about climate change through outright denying it exists and mischaracterizing what the Green New Deal and climate movement are about.

Schor mentioned the concept of unburnable carbon, which refers to sources of fossil fuel energy that can’t be used if the world is to stick to a certain carbon budget.

“A lot of the known reserves of fossil fuels which are on the books of companies now can never be burned,” Schor said. “If we do burn those, it does mean that we are going to that future of hell.”