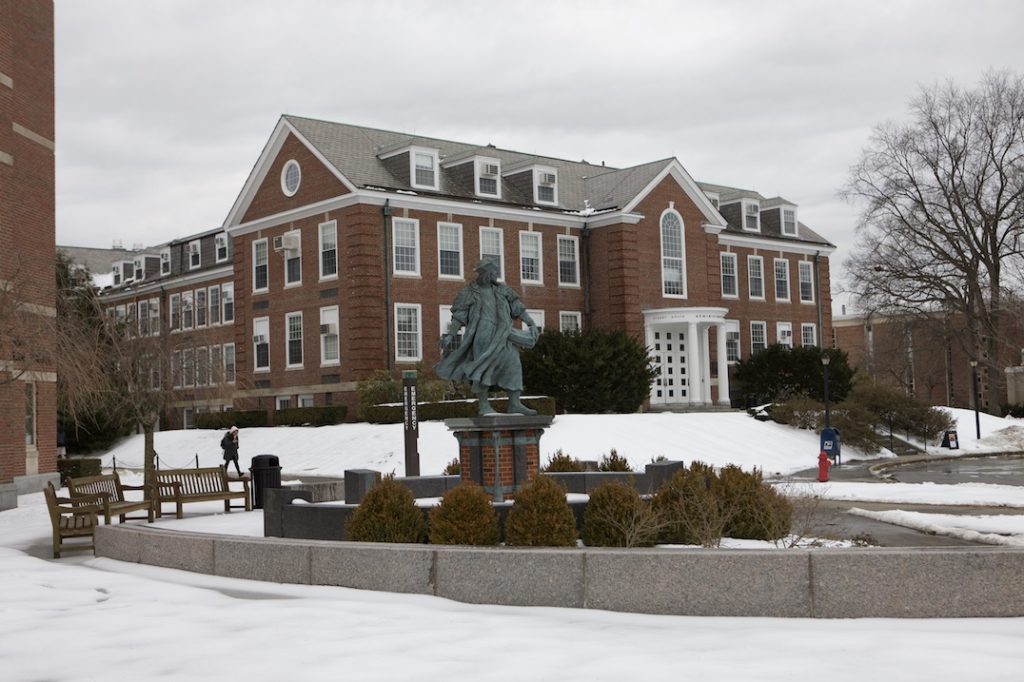 A panel of experts convened to discuss the rights of corporations on March 21. The conversation was organized as part of the Constitutional Rights of Corporations Conference, with BC Law professor Kent Greenfield’s book Corporations Are People Too (And They Should Act Like It) at its center.

Natalya Shnitser, the inaugural David and Pamela Donohue Assistant Professor in business law at BC Law, moderated the group.

Floyd Abrams, an expert on constitutional law, who has written several briefs for the Supreme Court, began by recounting the history of what the United States has constituted as speech that is protected under the First Amendment.

Abrams credits Greenfield’s book as being a “powerful and persuasive” articulation of the competing interests present in the analysis of what should and should not be considered protected speech by corporations.

Leo Strine, chief justice of the Delaware Supreme Court, spoke passionately against these ideals of a corporation’s right to “speech,” opposing Abrams and saying that a corporation doesn’t have the same rights to speech as an individual human being does.

Strine said he regards current U.S. constitutional law as one-sided. Though it utilizes the tools of both direct and republican democracy, there are certain issues on which representative democracy becomes ineffective, he said. While Strine credited Greenfield’s book for its understanding that the discussion of rights of corporations is complicated, he said that the work of literature ultimately falls short in its explanation.

The discussion quickly honed in on corporations’ impact on political campaigns, particularly the 2010 Supreme Court case Citizens United v. FEC, and bipartisan campaign reform legislation, such as the McCain-Feingold Act from 2002. In Citizens United, the Supreme Court ruled that the First Amendment prohibits restricting independent expenditures from corporations.

Strine posed the question of the connection between the facts of the case and its eventual conclusion, emphasizing that he did not think the McCain-Feingold policies were effective enough.

“The principles of Citizens United are founded on the ideological interests of the few over the many,” Strine said.

Abrams had a very different perspective on the matter of Citizens United, saying that it doesn’t make sense to him that for a conservative political group spending money on a film denouncing Hillary Clinton should be considered a crime if the film is broadcast within 60 days of an election—the time when it’s most important for the public to see, read, and hear about the candidates they are going to be voting for.

“It still seems to me so clearly that this is the sort of speech that is protected by the First Amendment” Abrams said in defense of the decision.

He went on to stress that, in his view, which aligned with the majority in Citizens United v. FEC , this matter was limiting the most important form of speech that is protected by the First Amendment—speech pertaining to voting allegiances.

Before Abrams could finish his point, Strine interjected to ask why he didn’t find an issue with the principle that, under McCain-Feingold, a corporation can use treasuries and funds to establish a political action committee. As an example, he referred to Exxon Mobil, which he stated is not a corporation but rather over a thousand entities—meaning it can engage in widespread electioneering communication, according to Strine.

While Strine had no opposition to the treatment of a corporation as a legal person, he contrasted the classification with the rights of an actual “flesh and blood human being.” He advocated for more liability on the corporations because they assume less risk than individuals.

“Many corporations do things that, if you were a human being, you would lose all your wealth for this week,” he said. “You would be [financially] incapacitated for 20 years.”

Scott began with expressing her high regard for Greenfield’s work and how she wishes she had access to it when she was beginning to practice law. She then explained the struggles labor union lawyers face when dealing with large corporations.

“I feel that we really missed the boat, again, [on] a lot of our education,” she said. “I would suggest that now all people going to practice labor law should be given a copy of Kent’s book so they can start to understand the interest on the other side from a legal framework.”

The shortcomings of the legislation pertaining to labor unions have become increasingly concerning, according to Scott. She recalled that, despite having worked with unions to elect President Obama, their efforts were not rewarded once he was in office.

“When I tuned in to see who was on that Economic Advisory Committee, I realized there was no labor leader,” she said. “We had been excluded from the debate.”

Scott explained that she was pleased with the recent surfacing of this discussion on a national stage and commended Greenfield, who, in his book, pushed for the expansion of the board of directors in corporations to include a broader range of stakeholders.

“I would argue from my respective working in the labor movement, is the fact that you cannot have that kind of intestinal democracy and effective organization on the board, unless you have industrial democracy, at the shop floor, at the level of the enterprise, and at the industry sector wide level,” Scott said. “And that’s where we have really gone astray in this country.”

Scott added that both Strine and Abrams were looking too narrowly at the issue. She stated that if you were to ask the unions if they could go back to legislation before the Citizens United ruling and use the general treasury for independent expenditures in order to remove corporate money from the equation, they would be in favor of it.

“We are closed out of at the bargaining table and at the boardroom,” she said. “This is something that in this day and age when we have so many difficult problems to settle and to resolve it’s a loss of democracy.”

BC Pulls Away From No. 13 Duke, Remains Perfect
Running Back Depth, New Secondary on Display in Jay McGillis Memorial Spring Game