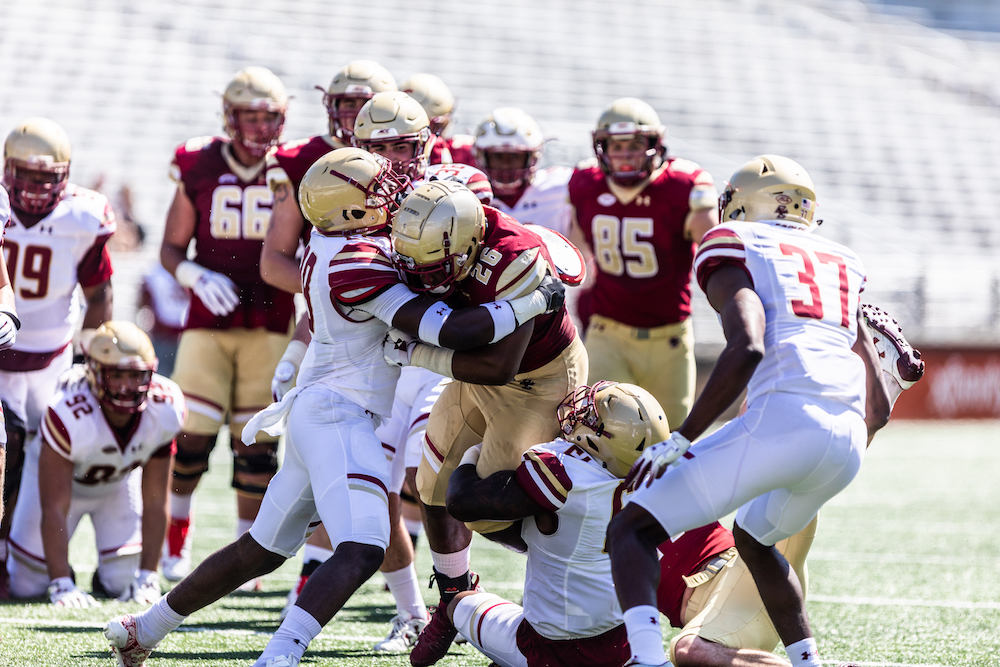 Boston College football divided up into two teams on Saturday afternoon for the Jay McGillis Memorial Spring Game, and, on a day in which A.J. Dillon watched from the sidelines and starting quarterback Anthony Brown played just two drives, the Eagles finished their spring with the Maroon team (offense) beating the White team (defense), 71-55.

The basketballesque scoreline was the product of an unusual scoring system that was put in place by the BC coaching staff for the first time in the Eagles’ Spring Game history. Two years removed from the 2016 game in which neither team managed to score a touchdown and finished with an ugly 6-2 final score, BC took after other collegiate programs—Notre Dame and Boise State for instance—and devised an interesting points system. It awarded points for first downs, rushes of 10-plus yards, passes of 15-plus yards, touchdowns along with defensive scoring for any stop per possession, three-and-out stop, sacks, tackle for loss, or turnover.

So, on the game’s first drive, with Brown under center, the defense struck first. The secondary lost a lot of talent from last season after Lukas Denis, Will Harris, and Hamp Cheevers all departed—but it flashed potential right off the bat. On fourth down, Brown dropped back and found Kobay White short of the first down marker, but Tate Haynes flew in and punched the ball out, scooped it up, and went 44 yards for a touchdown. It was a strong play from the redshirt sophomore, whom head coach Steve Addazio had plenty of praise for after.

“Tate has had a great spring,” Addazio said, before singling out Brandon Sebastian and Elijah Jones as well. “They’re really talented guys and they’ve played well this spring. We lost some talent there but we have talent there now. They’re ready to go.”

The second series, with Matt McDonald under center, stalled and resulted in a punt—but Brown returned and engineered a lengthy scoring drive. The redshirt junior connected with Korab Idrizi and Ben Glines for chunk gains, then displayed his impressive mobility with a first-down run. Glines, who only saw a few snaps on offense, was utilized on an end around in a similar manner to Jeff Smith last year, and turned the corner well for a slight gain.

“We didn’t run Benny [Glines] at tailback at all today,” Addazio said of the redshirt senior. “He might of had the most impressive spring, team-wide. We’ve got some depth there, which you need.”

Eventually, David Bailey—who spoke after the game about losing 10 pounds in the offseason, dropping to 240 pounds, and getting stronger—broke free through the left side for a 28-yard touchdown run, one of 12 carries for 91 yards on the day for the sophomore.

“It felt great being on the field,” Bailey said. “All spring ball all the backs have been getting reps, and with A.J. not there it was a chance for the younger guys to step up and show what we can do.”

Bailey was joined in the stat sheet by Javian Dayne and Peter Stehr, a pair of little-known redshirt freshmen who played well on Saturday. Dayne punched in a touchdown at the goal line in the first quarter and piled up 102 yards on 21 rushes. Stehr, meanwhile, carried the rock 23 times and found slightly less success, totaling 73 yards. Dillon watched from the sideline as one of several starting players that took a back seat to their companions on the depth chart, and the rising junior even played catch with a few kids in the stands at points.

Fans got to see almost the entirety of the quarterback depth chart on Saturday, whether it was Brown, McDonald, EJ Perry, Dennis Grosel, Matt Valecce, or highly-touted recruit Sam Johnson. The most impressive was arguably Valecce, a redshirt freshman from Mamaroneck, N.Y. He led all passers with 78 yards, going 9-of-11 through the air. Johnson showed his inexperience at times, and while he had one nice throw, he finished 2-of-5 and looked shaky despite the lack of a pass rush, per Spring Game rules.

The defense was solid in the back half of the game, working its way back on the scoreboard. Joey Lucchetti had three sacks, while Jaleel Berry and Medhi El Attrach—the pregame recipient of the Jay McGillis Memorial Scholarship—both had one. Mike Palmer picked off a McDonald pass in the third quarter and had a weaving 36-yard return, then Nolan Borgersen added a 40-yard return after a forced fumble. Izaiah Henderson, a freshman, looked good on the defensive line for the Eagles as well, who are replacing seven starters in total on defense.

“He’s going to be a talent,” Addazio said of the Mater Dei Prep product. “He started coming on at the end of the spring. You can tell he’s figuring it out. He’ll be playing this year, and we need him. We’re going to play a lot of young guys on that side of the ball.”

The game wasn’t without shaky spots, though. The kicking situation saw John Tessitore miss his first extra point of the game, while Danny Longman hit his first. Longman was roughly 10 yards short of a 52-yard field goal attempt—the football hit in the middle of the end zone—but he hit his extra points and surely will be considered the favorite to replace Colton Lichtenberg. The game ended on a sour note, too. Tito Pasqualoni, a tight end and the son of former BC assistant Paul Pasqualoni, went down with an injury while the clock was running in the fourth and was carted off. Addazio was unclear of his status after the game.

Overall, it was a typical Spring Game, one defined by youth and guys getting to shine in a game situation. The Eagles have a lot of pieces to work into the starting lineup after losing a bulk of their All-ACC talent in the offseason, but Saturday’s flashes of skill showed that there are some players who are poised to make the leap from the sideline to the field.