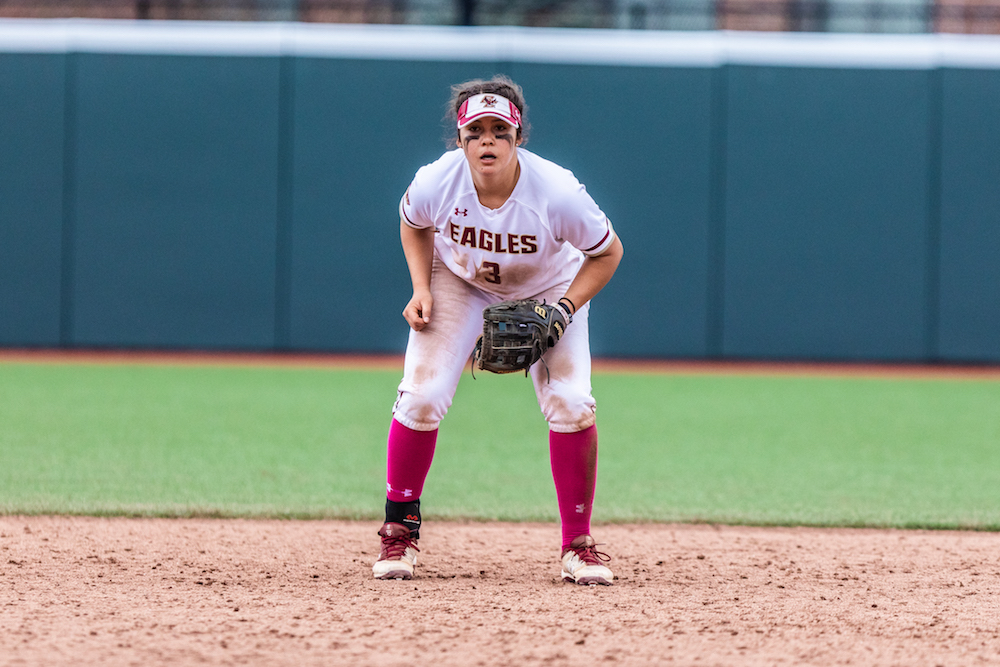 Boston College softball struggled this past weekend on its trip to Notre Dame, losing all three games of the series by a combined 22 runs. The Irish, who now sit in second place in the ACC, have been a formidable opponent the entire season. They are fourth in the conference in runs scored with 216, while the Eagles are dead last with only 114. Notre Dame is strong in the circle as well, boasting the fourth-lowest combined ERA among ACC schools at 2.68, while BC is second-to-last in that category at 4.93.

Overall, the statistics show that beating the Irish was always going to be a daunting task for the Eagles, and that played out on the field this weekend as well.

The third and final outing of the weekend was arguably the most competitive of the bunch, but the Eagles lost again—dropping their sixth straight game—this time by a final score of 7-2. They got off to a poor start by allowing three runs in the first inning and were unable to even the score for the remainder of the game.

Sophomore Abby Sweet drove in the first run for the Irish (24-12, 7-5 Atlantic Coast) on a sacrifice fly to center field that scored Riley Wester. Later in the inning, senior Melissa Rochford added two more on a single up the middle, scoring Cait Brooks and Katie Marino. BC (11-23, 3-9) starter Susannah Anderson settled down after the difficult first frame, pitching three great, scoreless innings, conceding only two hits in the process. BC’s lineup was nowhere to be found, though, accumulating only two hits in the first four innings.

The fifth inning was big for both sides, as the Eagles cut their deficit to only one run on a two-run single by sophomore Emme Martinez that drove in Lexi DiEmmanuele and Kristin Giery. But the Eagles couldn’t keep the game close for long, not after a disastrous bottom half of the inning.

The collapse started with two Notre Dame singles that put runners on first and third before a bunt single from Rochford drove in Shelby Grimm and moved Sweet to third. The next at-bat was simply a poor display of situation softball from the BC fielders, as Rochford attempted to steal second, but was caught in a pickle. The Eagles threw the ball around the diamond to three of the four bases, and Sweet scored during the confusion sequence. M.K. Bonamy, who was at the plate during this ordeal, proceeded to single up the middle and drive in Rochford, extending the Irish lead to 6-2. This really took the wind out of the Eagles’ sails, and they were never able to recover. Marino tacked on a solo home run in the sixth to end the scoring at 7-2.

The second go-around between the two sides on Saturday was more balanced, yet one bad inning cost the Eagles a chance at victory. BC took a 3-1 lead into the third, but Notre Dame’s bats came alive and scored five runs in what would end up being a comfortable 9-3 victory.

The third inning was pivotal for the Eagles’ lineup as well, as they left three runners stranded—failing to take advantage of their best scoring chance of the game. Once again, Anderson was relieved of her duties after 2 2/3 innings of work. She conceded four earned runs and five total amid the shaky performance. One positive note for the Eagles was that Allyson Moore extended her hitting streak further to seven games with a second inning single.

Friday afternoon’s game marked BC’s most demoralizing defeat of the season, with the Irish claiming an 11-0 win after only five innings of play. It was the Eagles’ seventh mercy defeat of the year, but their first since March 17. BC managed to get only two hits in the contest, a single by Moore and another single by DiEmmanuele. On the opposite side of the ball, the Eagles used four pitchers—including Anderson, who was chased after 2 2/3 innings, having given up five earned runs. The standout player for the Irish was Marino, who had two hits, two runs, and three RBIs in the series-opening matchup.

Notre Dame has won four straight games and is playing some of its best softball of the season. Conversely, the series sweep brought BC its sixth consecutive loss, including its fifth straight against conference opposition.

Struggles in conference play were expected for head coach Ashley Obrest and Co., as the team replaced a great deal of talent from last season, but this kind of slide didn’t always seem to be in the cards. The Eagles haven’t been able to find consistent pitching, and they’re not helped by the fact that the team leads the conference in errors (13) and is catching stealing baserunners at the second-lowest rate of any program in the league. With four ACC weekend series remaining, it’ll take an awful lot for the Eagles to come close to last year’s 13-win conference slate.

UGBC Senate Candidates Release Platforms Ahead of Thursday Election, Not All Seats Will Be Filled
Go Figure: Freshman Pelio Making His Name Known Against ACC Elite