Home » ‘All American Boys’ at ISG Inspires and Connects Audience 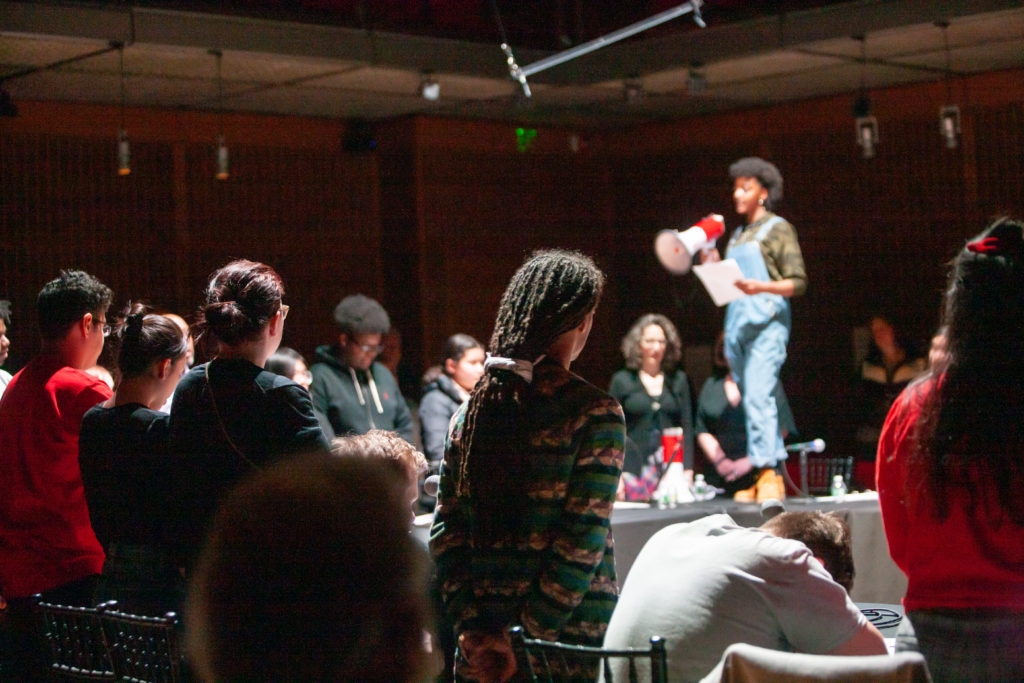 ‘All American Boys’ at ISG Inspires and Connects Audience

In 2015, two men were touring the United States to promote their debut novels. They were both published by the same company, and they visited  a lot of the same places. But when they went through airport security or into a bank, they noticed that their experiences were not the same.

Jason Reynolds is black. Brendan Kiely is white. Together, they decided to write a novel about two boys—Rashad Butler and Quinn Collins—who are tied together after Quinn witnesses the brutal beating of Rashad at the hands of a police officer. The officer, Pauly Galluzzo, is the brother of Quinn’s best friend. While Rashad is in the hospital recovering from his injuries, Quinn is at home and in school, trying to cope with what he saw and how he should respond. The novel is called All American Boys.

A group of actors got together and performed a round table reading of an adaptation of the novel on Thursday evening at the Isabella Stewart Gardner Museum. The performers met for the first time six hours before they were set to read the script in front of an audience. When they took their seats at the four tables in the shape of a square in Calderwood Hall, they were separated by audience members who were assigned to sit at the table.

The people reading the script are not here to entertain you, said Helga Davis, the visiting curator of Performing Arts at the ISG, to the audience before the reading. They are here to be with you.

The script opens in a classroom on a Friday, and all of the kids are talking about their plans for the weekend. There’s a party at Jill’s house—the whole cast swoons and says “Jiiiiiill,” who has caught the attention of Quinn (Seamus Doyle)—and basketball season is gearing up soon. Rashad (Ricky Pate) goes to Jerry’s Convenience Store for a bag of chips—not plain chips, “who even eats those?”—and as he’s shopping around, the cast calls out “Now pay attention.”

One person narrates what is happening in short, punchy sentences. Another actor picks up a bucket and hits it at the end of each sentence, creating a suspenseful rhythm that had everyone in the room holding their breath. Rashad bends down to pick up his phone. The woman behind him doesn’t see him and trips over him. The bottle she was holding breaks. Rashad’s chips go flying.

The store clerk runs over, accusing Rashad of trying to steal the chips. Cue the police officer and the moment that Rashad and Quinn will play over in their minds hundreds of times over the course of the next hour and a half. While Rashad is being beaten, Quinn runs away to his friends and goes to the party that night as though nothing had happened.

The effects of those quick moments reverberate for the rest of the story. Rashad’s father’s first instinct is to question him about what he was doing that made him a suspect. Were your pants sagging? What did I always tell you about dealing with cops? Cooperate, keep your hands out of your pockets.

Quinn’s relationship with his mother is strained, too, when he starts to succumb to his guilt and act on behalf of his good conscience. She views it as abandoning the Galluzzos, who have supported them since Quinn’s father died. The tensions between families, teammates, as well as those within individual people continue to grow until Rashad’s brother organizes a protest, drawing out both sides.

Around the room in Calderwood Hall hung white signs with black text. A name or two was listed on it, and a paragraph underneath each name chronicled how the person was killed by the police. When the protest scene approached, Quinn called out the name of everyone listed around the room. The cast called out, “Absent,” for each. When he finally called out “Rashad,” the young boy stood and said, “Present.” The scene was chilling, a powerful closing for an incredibly powerful reading.

Naheem Garcia, who played Rashad’s dad, said that for a while he wasn’t entirely supportive of Black Lives Matter. He was frustrated that black people committed crimes against each other and didn’t feel connected to any of the social movements he saw taking place. After his reading of All American Boys, though, something had changed.

“This has moved me,” he said. “And I haven’t been moved by the movement at all.”

All American Boys was brought to Boston because of Off the Page Education, an organization that uses art and creativity to bring history to young people. Specifically, it was Jody Drezin Alperin and Vicky Finney, two white women who went to a middle school in Bed-Stuy to teach kids about civil rights in 2014. It was the day after a grand jury decided not to indict Daniel Pantaleo, a New York Police Department officer, in the death of Eric Garner, a black man who died after Pantaleo put him in a choke hold.

Alperin and Finney asked the kids what they wanted to research about civil rights, and the students responded that they wanted to look into racial profiling. They made a podcast with their findings and brought it to the City Council, which was composed of mostly white people. Alperin and Finney said that the councilors were so uncomfortable, they just asked the students what equipment they used to record the podcast and avoided the actual substance of what they had heard.

They felt that they had to do more with their students, so in September of 2015, Alperin and Finney created their adaptation of All American Boys.

As the goal of the performance was to be together, not to entertain, Davis gave a few people in the audience a chance to speak after they listened to the reading. One young black man was moved to tears.

He said that he’s been in college for four years and is going to graduate in four weeks. Sitting in that room, listening to that story, he felt that he had seen others, and was seen by others, more than he ever had been before.

Members of the cast listened to him speak, and many of them joined him in his tears, seeing that their intended purpose with performing this story was received so fully by somebody in the audience.