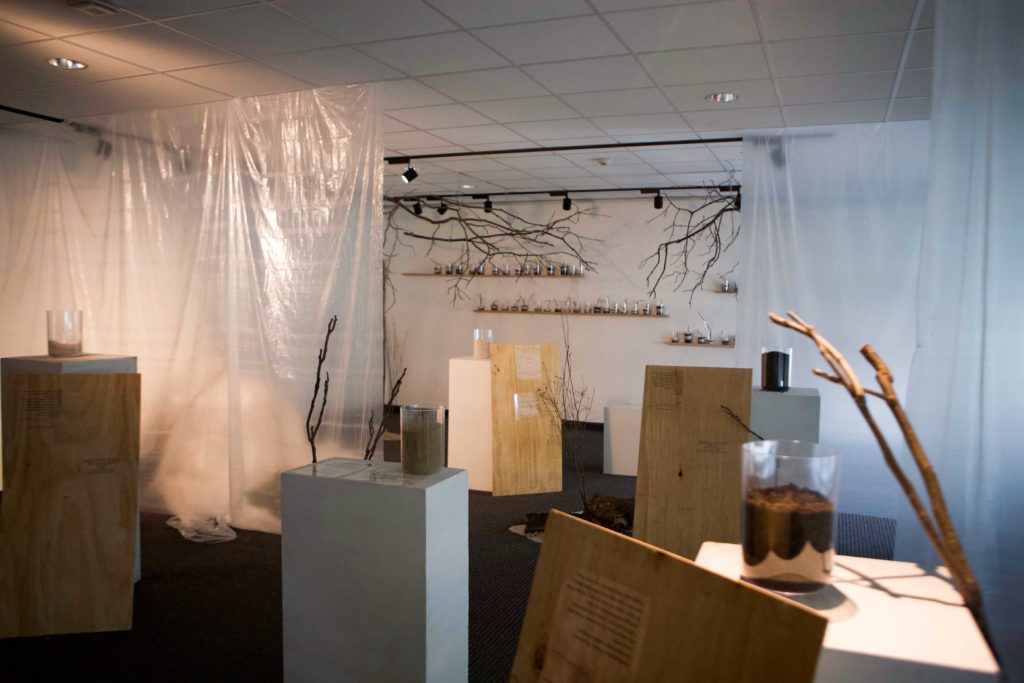 Francine Almeda, MCAS ’19, had never tried her hand at art before creating the I Have Never Feared the Woods exhibit, an incredibly aesthetically pleasing, interactive experience that requires the viewer to ponder their life and engage with the art. She dabbled in pre-med and architecture before finding her home in the philosophy department, a discipline that explains the philosophic touch of her introspective exhibit.

The exhibit itself is cool and mysterious upon entry—an unusual soundtrack plays in the background as viewers read instructions off cards and move from station to station. At the beginning of the maze-like exhibit, you are given a clear cup. Each station displays a poem, often about feelings of discouragement or overwhelming anxiety, next to a container of soil, sand, or rocks. Viewers are supposed to fill their cup with the material to represent how much they resonate with the feelings expressed in the poem. This tactile element—using your hands to feel the weight and texture of all the different materials—is a crucial aspect of the exhibit.

Each station represents a different stage of life—the first one evoked memories of childhood bullies, while others brought forth pressures and expectations parents place on their children when applying to colleges. The final station was the most dramatic, as participants reach upward to break a small twig off a large branch hanging by a chain from the ceiling. Little slips of paper are provided so that viewers can record an affirmation or personal goal and hang it on their twig.

Minimalist floating shelves placed at the end of the exhibit house the dozens of mini trees participants have left. The end products look like earthy sand bottles, each with a little branch sticking out. Many of the papers are a reminder of individual growth, reading phrases such as “learn to be okay with the unknown” and “it will come in it’s own time.”

Almeda encouraged me to take a look at the messages scribbled onto the branches. They served as a clear reminder that everyone has personal struggles, many of which aren’t all that different from what other students are going through. The finished product is a wall of introspection and solidarity. The wall is a work of art in itself—dozens of cups filled with various patterns of neutral, earthy materials stand beneath the huge branch hanging overhead.

It’s easy to see how a person with a background in philosophy was behind this exhibit. Almeda cites her major as one of the reasons she wanted to design something so experiential.

“It’s for the person who is here,” Almeda said of the intensely personal aspect of the exhibit.

Each person who enters the room is able to become a part of the final product, allowing them to fully reflect on their journeys.