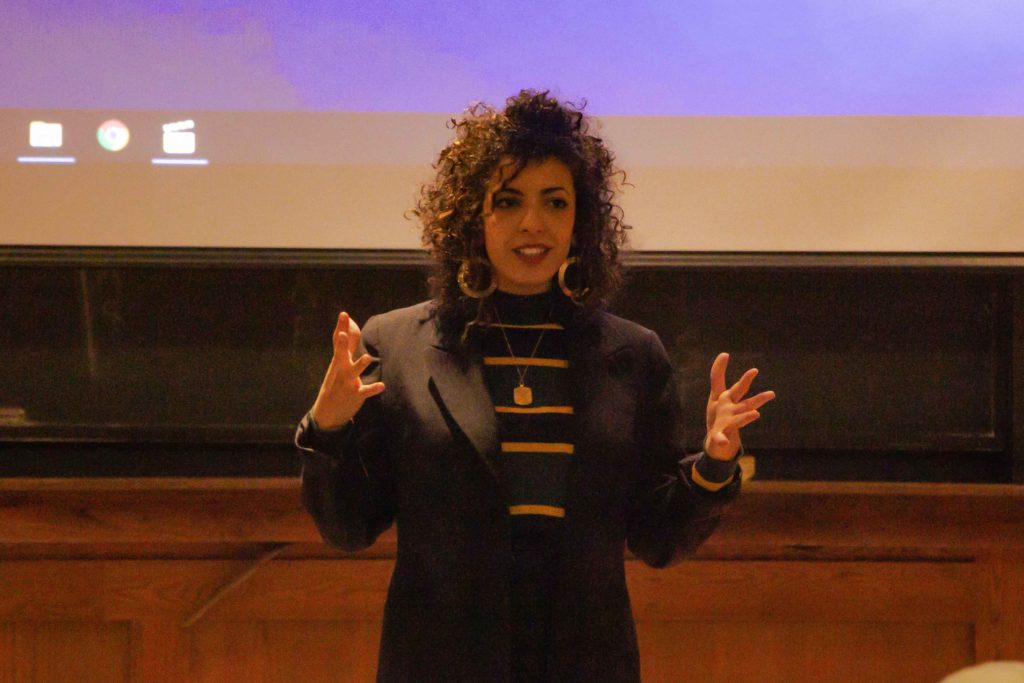 Rana Abu Fraiha began the screening of her first film, In Her Footsteps, with a brief disclaimer. Before warning the small audience seated in Fulton 511 of the emotions that were sure to surface throughout the film, Abu Fraiha invited viewers into her home in Omer, Israel, where her mother laid in her bed sick with cancer.

“You’re about to get to know me really, really well,” Abu Fraiha said.

She pressed play, and the film immediately thrust the audience abroad into the desert Bedouin territory her father grew up in. Throngs of Bedouin women, clad in veils and dresses, approach Abu Fraiha as she arrives. There’s no music to accompany Abu Fraiha as she speaks to a local, one familiar with her now-deceased mother, Rodaina. This intimacy—based on emotional conversation—carries throughout the film, as it touches the delicate subject of Rodaina’s impending death.

Abu Fraiha’s father is a Bedouin by birth—historically, Bedouin people are nomadic and Abu Fraiha described the discrimination her father faced as seemingly unfounded. In fact, Abu Fraiha’s mother had to convince her own parents to let her marry Abu Fraiha’s father. That’s where In Her Footsteps begins—with vintage films of Rodaina’s wedding. The audience gets their first taste of the sassiness and tenacity of Rodaina that gives Abu Fraiha’s film its flavor.

Soon enough, Abu Fraiha’s camera travels into Rodaina’s home as she sits on her living room sofa waiting for her doctor to deliver much-needed morphine. Speaking in Hebrew, Rodaina laments the immense pain she’s in as her illness continues to take over her body. Still, as Abu Fraiha’s camera follows Rodaina’s painful journey to its ultimate end, she gives her dying mother a platform to speak on the injustices she’s faced as an Arab raising children in Tel Sheva and Omer, Israel—primarily Jewish towns.

In between shots of Rodaina’s firey spunk, as she zings back her children’s quips and the dreadful debilitation of cancer on a human body, the audience learns of the uphill battle of Rodaina’s life. During motherhood, Rodaina had to decide how to raise her Arabic children in a Jewish community. Ultimately, this culminated in deciding where Rodaina would be buried—in the Jewish cemetery of Omer or in her hometown of Jatt.

As an Arab, Rodaina wasn’t permitted to be buried in Omer, even though it was the town she resided in until her death, leaving the Abu Fraiha family to bury its beloved mother in Jatt, at a funeral many of her children wouldn’t be able to attend.

Abu Fraiha’s film closed with her eulogy of her mother, as the rest of her family attended her burial. Tears flowed while the screening room lights turned on. Abu Fraiha described the need to document her mother’s cancer and inevitable death as a form of coping—both with her mother’s death and the prejudice Rodaina and Abu Fraiha herself experienced as Arabs in a Jewish town. Instead of embracing their heritage, Rodaina and her family had to hide it—speaking Hebrew instead of Arabic, for example.

“In practice,” Abu Fraiha said. “There is no room to really be different.”
Abu Fraiha Abu Fraiha’s film In Her Footsteps—while heart-wrenching and tear-jerking—is about much more than her mother Rodaina’s death. Abu Fraiha used her mother’s death as a vehicle to depict oppression, and the film came together as a beautifully intimate portrayal of family in a time of immense hardship.

in her footsteps rana abu fraiha
Circa Waves Hits Rough Water on ‘What’s It Like Over There?’
Arabic Culture Night Celebrates Middle Eastern Heritage