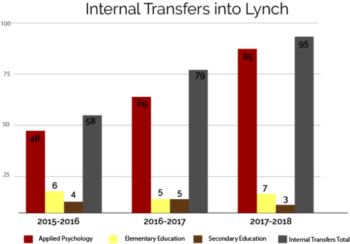 Large numbers of Boston College students are internally transferring from their respective colleges into the applied psychology and human development major in the newly renamed Lynch School of Education and Human Development. Lynch is set to begin offering undergraduate courses over the summer this year, which will help these internal transfer students graduate on time and have more flexibility in their coursework, according to Julia DeVoy, the associate dean of undergraduate students in Lynch.

The number of internal transfers received by Lynch rose significantly from 2015 to 2018. Ninety-five students transferred into Lynch from other colleges in the 2017-18 academic year—a total that increased from 79 students the year before and 58 the year prior to that. For each of these three years, all but 10 internal transfers into Lynch were switching into the applied psychology major.

This academic year, 43 students have already internally transferred into the applied psychology major—a figure that does not include the 35 who have indicated that they would like to make the switch at the end of this semester, according to DeVoy. BC students are not allowed to transfer between colleges until the end of the spring semester of their first year.

DeVoy credits the major’s flexibility and relevance to the current way the workforce operates as being part of the reason for its popularity.

“Both students and their families are recognizing the multiple pathways that one can take post-BC with this major,” she said.

DeVoy suggested that one reason the applied psychology and human development major is a popular one for students to switch into is it has three different subpaths—human services and health sciences; organization studies and human capital; and policy, advocacy, and community change. A fourth subpath in the major, “science of learning,” will be debuting this fall.

Yi Zhao, Lynch ’19, transferred into applied psychology after starting her BC career as a psychology major in MCAS and taking Psychology as a Natural Science during her first semester. She said she knew many people from that course that later transferred into Lynch because it made them view the subject of psychology differently and reconsider their course of study.

“I found out that I would probably be more interested in the applied side of the psychology, the actually doing experiments with people and seeing how the principles can be applied into real settings,” she said.

DeVoy pointed out that the number of students pursuing teacher education degrees has been declining over the past several years—a trend that can be seen in education schools on the national level, not just in Lynch.

But while fewer students were choosing to get teaching degrees, more were electing to study in the applied psychology program, DeVoy said. Of the 633 students currently in Lynch, 474 are applied psychology majors. The major was the eighth most popular at BC as of December 2018, according to the BC Fact Book.

DeVoy pointed out that the world of work has changed and that the idea of a career is very different now than it used to be, which she believes is related to people’s interest in the applied psychology major. People don’t just stay in one job anymore, she said—they’ll stay at one job for shorter periods of time, before moving on to something different.

“I can really see the interest in this major being part of the new concept of career and part of a new concept of the world of work,” she said. “This major is very, very deep in allowing our students to experience academic rigor, but also meaning and purpose.”

DeVoy said that people who study applied psychology tend to really enjoy the major, and they can follow many pathways coming out of it. The human services and health sciences focus opens up opportunities for students in mental health counseling, social work, public health, and the health sciences, she said. Students who pursue the organization studies and human capital focus often end up in business and organizational contexts. And with the focus in policy, advocacy, and community change, many students go on to pursue work in community development, government, advocacy, and activism.

The new “science of learning” concentration, DeVoy explained, will help students who are interested in designing environments that would facilitate instruction, learning, and cognitive development—both in schools and elsewhere—and fostering motivation in educational contexts.

For the Class of 2017, 38 percent of applied psychology majors went directly to graduate school, 52 percent became employed full-time, and 6 percent went into volunteer and service positions, according to DeVoy.

DeVoy said that another reason for the large transfer population into the applied psychology major in Lynch is that people across the University will declare a minor, later becoming so interested that they decide to major in the subject.

Lynch is going to offer undergraduate courses during the summer for the first time this year, which DeVoy said will help some of the students who have internally transferred into Lynch who otherwise might have had to postpone their graduation to take all of their required classes.

DeVoy also pointed out that many internal transfer students will be disappointed that they didn’t have the opportunity to take ERA—which stands for Experience, Reflection, and Action—Lynch’s first-year program, so the school has been giving them the opportunity to be teaching assistants for the course.

“The Lynch school is really a place where people find a sense of community, and that they matter,” DeVoy said. “They figure out how they can matter out in the world in a way that actually maps onto some really interesting potential trajectories. This is a door that gives you a wide-open opportunity for grad school and careers.”