Home » McHugh Raced Against Racism and Now Runs for a Cause 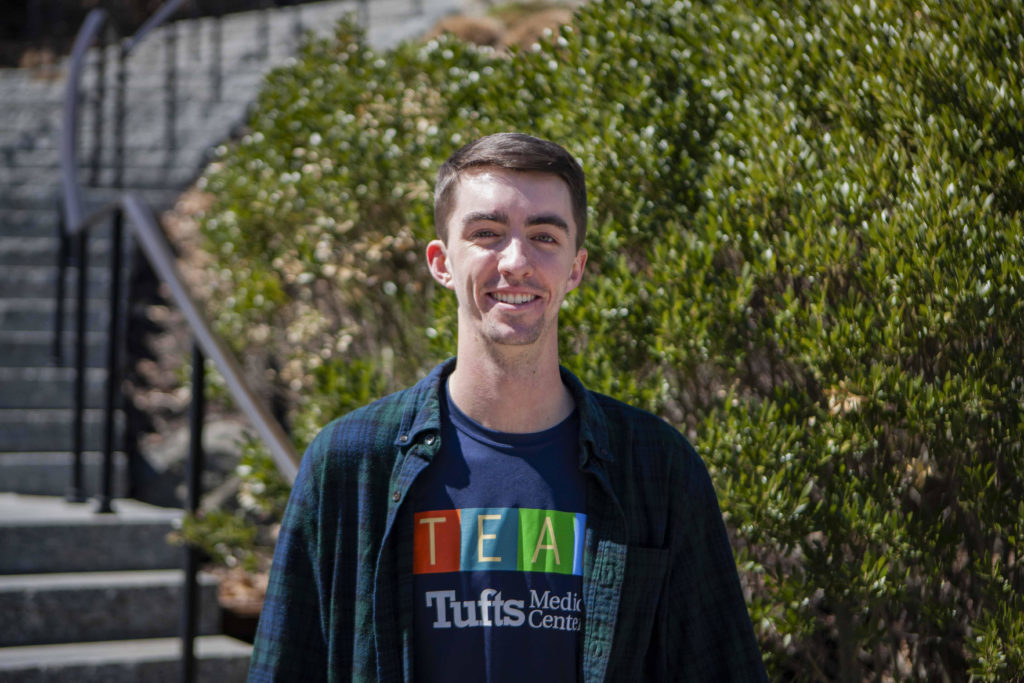 McHugh Raced Against Racism and Now Runs for a Cause

Discarded Band-Aids and paper cups were stamped into the pavement of the Chestnut Hill streets, serving as the only reminder that thousands of feet had passed through the usually calm suburb mere hours ago. Silence surrounded a lanky figure as he cut through the crisp night air, but the sounds of the day—the cheers of the crowds, the sirens of police escorts clearing the roads, the heavy breathing of the runners who bounced by—played on a constant loop in his head as if he had mentally recorded the soundtrack to the action that took place.

The sensory overload of his first Marathon Monday left Phil McHugh, CSOM ’19, in need of a nap, but hours later he awoke disoriented in his Williams Hall dorm room. Itching to prevent a night of twists and turns from nap-induced insomnia, McHugh went for a run.

“It was almost like a movie moment,” McHugh said. “In my mind I could hear the cheers and the echoes from that day, but it was completely silent.”

McHugh ran four miles of the Boston Marathon route that night. It was then that he knew he wanted to experience the sights, sounds, and feelings of the city-wide holiday from the other side of the barricade before he graduated from Boston College. The then-freshman’s first Boston Marathon experience had sparked in McHugh what it has in lifelong Bostonians and world travelers alike. A creeping ambition to arrive at the finish line and experience the catharsis of a satisfaction for which each runner so tirelessly strives took hold. Although the athletic allure was there from the start, McHugh had not yet identified a cause to carry his steps from Hopkinton to Copley Square.

Often pausing and shifting his focus to other areas of the Rat as if physically searching for the right words to answer a question, McHugh speaks with purpose. This process of deliberation, of searching for meaning, is mirrored in his service-driven gestures: The senior initiated the campus-wide Race Against Racism campaign—an action oriented challenge to address racism within student organizations—earlier this semester, and he is the 4Boston council person for Marian Manor, a nursing home in South Boston.

“When he is with the residents and the staff at Marian, he is eager to help them with anything they need, no matter how silly the task may seem, like dancing on a stage while there is a performer at Marian,” Maria Tavierne, a member of McHugh’s 4Boston group and MCAS ’20, said.

McHugh’s desire to connect with the world around him is further reflected in his plans to complete a Venture for America fellowship, a program that connects college graduates with startups in struggling cities, after graduating in May. McHugh’s time at BC has been defined by his commitment to others. It was inevitable that he would find himself searching for a way to serve others while running the marathon.

Shifting from the audible to the visible, McHugh’s sophomore Marathon Monday found the Cincinnati native pursuing a Where’s Waldo-like search in the massive crowd of runners. Again behind the barricade on Commonwealth Ave., McHugh sought three strangers who were wearing the same “Team Dewey: Kicking ALS” shirt as him. The women were running the marathon in honor of a family friend of McHugh that had been diagnosed with ALS in 2015. Although they had never been introduced before, the runners paused to hug McHugh when they saw he was wearing the Team Dewey shirt.

“That rush of emotion of realizing who they were running for and [that they were] running for something bigger than themselves made me think like, ‘If I’m going to run, it has to be for something more important than just the excitement of the race,’” McHugh said.

Fast forward to senior year, and McHugh will be running the marathon for Tufts Medical Center, a cause he deems worthy because of the life-saving services the hospital provides to its patients and its commitment to serving Boston—a city that has provided him invaluable experiences during his four years at BC. Similar to how the hospital provides support to its patients in downtown Boston, the Tufts Medical Center marathon team has offered McHugh the necessary guidance to prepare for his first marathon.

Despite his show of athleticism during his first taste of the Boston Marathon, McHugh does not consider himself a runner. In fact, McHugh is perhaps the most inexperienced in his marathon training group, which includes veteran runners with up to four Boston Marathons under their belts—or in this case, bibs.

“We went around the first time we met as a charity team and everyone talked about how many Boston Marathons they’ve run,” McHugh said. “And it got to me, and I told them the longest race I’ve ever done is a Turkey Trot 5K back home.”

Although McHugh is a longtime writer for The New England Classic, he wasn’t kidding about his lack of experience—the 6-foot-4 senior had to work hard to build up the stamina and endurance for the 26.2 mile race. To prepare, McHugh runs with his friend Abby Arena, a runner for the Martin Richard Foundation and CSOM ’19, at 7 a.m. every Tuesday morning and goes on long distance runs with members of the Marathon Coalition on Saturday mornings. Composed of 23 different charity teams, including Tufts Medical Center, the Marathon Coalition hosts a guest speaker who has been directly affected by the work of one of the charities before every run.

After hearing the stories of how marathon runners have influenced the lives of others, McHugh decided to add another element to his reason for running—McHugh is going to dedicate each mile to something that is important to one of his friends or family members. McHugh’s friends began reaching out and asking if he could run a mile in honor of someone they lost, and he very quickly had 26 names of people and causes to decorate the back of his Tufts Medical Center shirt.

These additional intentions will provide McHugh with plenty to think about during the long race. Although over 30,000 people run the marathon each year and hundreds of thousands come out to watch, McHugh will be alone with his thoughts on the crowded streets—McHugh does not listen to music while he runs and often becomes lost in thought or drifts into the minutiae of tests and assignments when he hits the six or seven-mile mark on his practice runs.

When leaving behind his own trail of paper cups and Band-Aids, McHugh will be doing much more than running down a dream born in the claustrophobic confines of a twin bed or chasing a movie moment on Comm. Ave. McHugh will be making an impact on those around him—whether that be unfamiliar hospital patients watching the action unfold on a television screen or lifelong friends hanging on the barricades waiting to spot the Waldo with names for stripes—with each stride.