Home » There is No Non-Toxic Masculinity 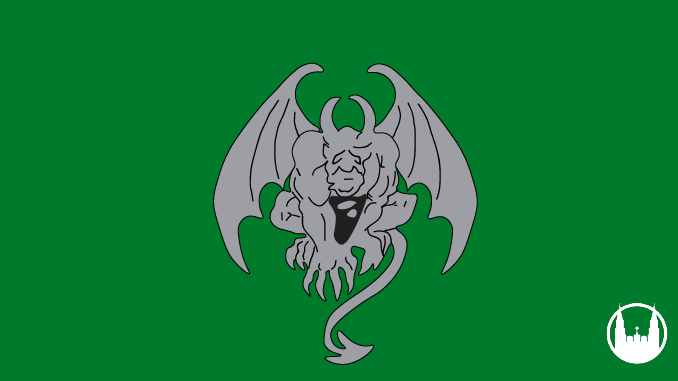 There is No Non-Toxic Masculinity

When I agreed to take this column, I didn’t realize how conflicted I would feel while actually sitting down and writing it. I was also surprised at how much worrying I’ve done over the past few days about insulting or upsetting those who identify as men.

But then again, it’s not as though my words or opinions are final and, if at any point below you as a reader feel compelled to disagree with me, please do not hesitate to do so. More importantly, if you feel as though I have insulted you, maybe think about why. And if you come up with something more legitimate than “you sound like a man-hating gargoyle,” then go ahead and write a Letter to the Editor where you prove me wrong. I am just another student trying to figure things out, I can always be convinced to change my mind.

The question I have been mulling over this week is that of toxic masculinity and what masculinity in general means to me. Ultimately, I have come to the conclusion that all masculinity is toxic and since it’s also largely constructed, we should work toward discarding the term.

I say largely constructed because, to me, there is an innate desire in many among us to express ourselves in one way or another. Stating that gender is a total and absolute construction with no connection to the body is something I have become less and less comfortable with throughout this year. This is because I believe terming gender as entirely constructed can leave us with bodies that are just empty vessels instead of active and powerful participants in the ways we live gendered lives.

It’s also due to the fact that terming gender a complete construction can undermine the obvious desire for some of us to live with one gender over another. By this, I mean to highlight the fact that for a portion of our society (those individuals who are transgender, gender non-binary, or genderqueer), there is an innate feeling of rightness with one type of gender expression over another. While we can argue that a cis-gendered female such as I only wants to express the way that I do because of societal conditioning or pressure, there is little of the same to be said about those individuals who actively choose to go against the societal grain.

Masculinity in itself is constructed as a zero-sum game where the winner is momentarily safe from harm (until another more masculine and hegemonic individual prays on him) and the loser is effeminized. This is the idea that masculinity, whether hegemonic or not, must pray on the weaker in order to exist. Think if your stereotypical high school flick: The football jocks look down on lacrosse bros, the lacrosse bros sneer at the theatre male leads, the male leads make fun of the videography club members, and that club laughs at the chess club that excludes gay and transgender students. None of them feel masculine enough, because ultimately no one is devoid of love, compassion, and desire for compromise.

By that I mean to say that masculinity can only exist in a power dynamic with other genders—classically, femininity. One can not display feminine behavior and be rewarded by the masculinity police at the same moment. This is because constructions of gender are used in order to first differentiate qualities and then to put them in a hierarchy—demanding that one is better, stronger, braver, or more desirable than another.

This creation of a power pyramid is in itself a very masculine and toxic act, leaving little to debate about who—at the highest levels of society—ultimately enforces, shapes, and validates gender roles. It is the work of masculine men.

The qualities that differentiate masculinity from femininity are aggression (in contrast with care or pacifism), individualism (in contrast with collective action or thought), and refusal to compromise. Mind you, I did not come up with these—men did.

To me, in all of these categories, femininity is a better model for a society that is attempting to achieve harmony, peace, and progress.

Some may argue that, for example, providing for one’s family or being a protector is a good quality of masculine behavior. I would counter that, in masculinity, the role of a breadwinner is not as much about loving one’s family as it is about holding the financial power within that family unit. If masculinity cared for putting bread on the table, then men would not be historically so uncomfortable with having their wives work—a trend that we have yet to totally transcend as a society. There are other examples such as these which I won’t expand on here in fears of turning this column into a novel.

By arguing that all masculinity is toxic, I do not—under any circumstances—mean to say that you can’t dress in a suit and have a short haircut without being toxic. This jumble of words that I have gifted The Heights is not about clothing, burliness, beards, or any other outward form of expression. It is about internal qualities that we possess as humans.

Additionally, I don’t believe that people who identify as men should stop doing so—we can actually take guidance from transgender individuals in this case. In making a transition from female to male, some transgender individuals may alter their outward appearance without altering their personalities. Transgender men who actively honed their feminine qualities do not have to trade them for aggression or violence after transitioning.

Do I think that after discarding masculinity we should all become feminine? No. For one, that in itself is a toxic and restrictive notion, as femininity can be. It would also imply that there are only two ways of expressing gender. Instead, I simply believe that we should examine the traits within ourselves that we believe make us masculine and decide if they are worth keeping around.

masculinity monthly series
Moving Straws Is Great, but What About Divestment?
BC Should Have Sexual Assault Climate Survey, Annual Bystander Training 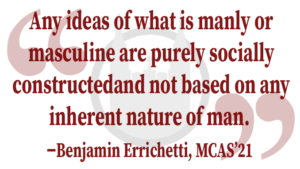 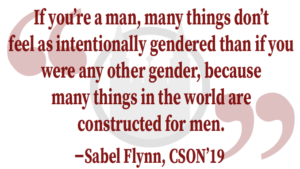 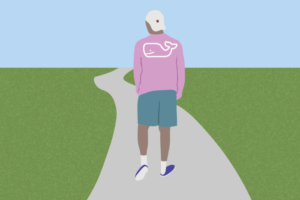