Home » Representing the Campus School, Collins’ Marathon Is About Giving Back 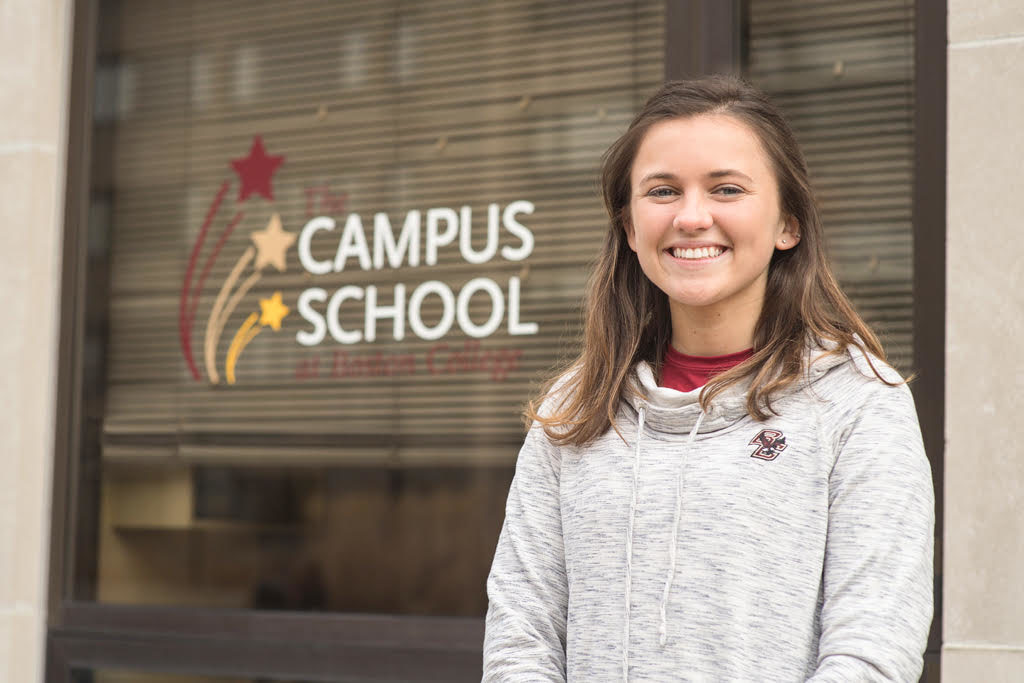 Representing the Campus School, Collins’ Marathon Is About Giving Back

Some of the world’s most revered marathon stories have taken place in Boston, along Commonwealth Avenue. Rosie Ruiz, “the imposter,” was the first-place women’s finisher in the 1980 race before it was discovered that she had blended into the crowd at the race’s start and had just popped out to run the last mile to the finish. Geoffrey Mutai finished with a world-record time in 2011, but his split wasn’t eligible for the record status by the International Association of Athletics Federations’ standards, due to the unusual Boston Marathon course. And in 2012, Joshua Cassidy of Canada set the men’s wheelchair world record with a time of 1:18:25.

Simply put, the Boston Marathon attracts the best of the best when it comes to marathon competition. So it might be surprising to some that one of these best, Helene Collins, Lynch ’19, says she often found herself at the back of the pack in her high school cross country meets.

“It was more of a social thing for me, to stay in shape,” Collins admitted with a laugh.

Still, the graduate of the Hopkins School, a private day school in New Haven, Conn., found something intrinsically rewarding in long distance running. She found that she didn’t quite have the chops to run at a quick clip, like some of her teammates, but she could maintain her pace on longer runs.

Though she stuck with her high school team, Collins began to venture beyond the five or six-mile runs that her cross country regiment often limited her to. Collins said it took her almost all of high school to be able to run this distance in the first place. But as long as she adjusted her pace accordingly, she had no issue running farther and farther distances—eventually she completed her first half marathon toward the end of her Hopkins career. She would run another in her first year at Boston College.

Not too long after, Collins ran her first marathon during her sophomore year at BC—not just any marathon, but the largest one in the world: the New York City Marathon. A big leap from the half marathons that she had been running, Collins didn’t seem to be fazed by the challenge and eagerly stepped up to the task.

“I figured, once I can do a half, I can try another half,” Collins said. “And somehow, I survived, and I said, ‘Okay, let me try again.’”

She ran the New York City Marathon again her junior year. But the Darien, Conn., native set her sights on conquering Comm. Ave., the Scream Tunnel, and Heartbreak Hill her first Marathon Monday at BC.

“It’s been a dream since I was a freshman,” Collins said. “I wanted to run the Boston Marathon as a senior. And I wanted to do it for the Campus School.”

As a student in the Lynch School of Education and Human Development, Collins lended a significant portion of her time to the Campus School at BC, a branch of Lynch that teaches individuals with multiple developmental disabilities aged 3 to 21, as a volunteer from her freshman year on—now, she works there eight hours a week as an employee.

Collins found it difficult to raise the $10,000 fundraising goal—she was able to reach her goal this past weekend—but found the determination she needed to reach out to family and friends in the inspiration she drew from her work at the Campus School.

“[Running for the Campus School] makes the run for something so much bigger than myself,” she said. “I’m running for the students that need these services.”

Her enthusiasm to serve her friends in the Campus School is made obvious just by listening to her speak about the work she does—a willingness that has not gone unnoticed by one of her roommates and fellow 2019 Boston Marathon runner Mallie Mikkelsen, MCAS ’19.

“She doesn’t just walk in [to work], and then walk out,” said Mikkelsen. “A big reason for why she’s so successful … is she is able to go into it and love what she is doing.”

Mikkelsen met Collins going into their junior year on the beginning-of-summer retreat that all Orientation Leaders embark on before they start their summer sessions. They sat together on the bus ride to the site and later stayed in Vanderslice as roommates during the summer.

Since reaching her fundraising goal, Collins remains committed as ever to her training—she’s started to taper, following a 21-mile run she took part in a few weeks ago with the Boston Road Runners, a local marathon training group. Tapering means that she’s progressively decreasing her run distances as the big day approaches. But she remains just as devoted to her mission at the Campus School, one she finds so important in both her time here and after she leaves—she plans to become a nurse after she graduates.

“I think the Campus School is really a hidden gem on our campus,” she said. “Part of [my motivation] is running, but the biggest part is giving back to something that’s given so much to me … my greater purpose is sharing their community with the larger school.”

Photo Courtesy of The Campus School