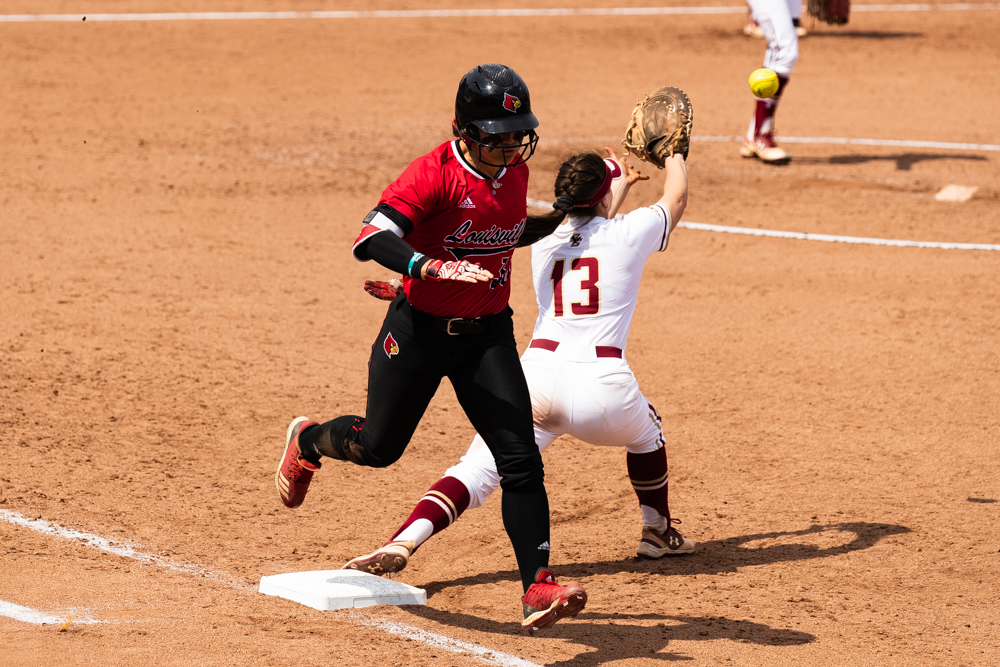 Coming off a Saturday afternoon win over a strong Louisville squad, Boston College softball had a tremendous chance to earn an important series victory. Unfortunately for the Eagles, the Cardinals dominated the final game of the series, pulling out a 10-2 win.

The Cardinals (27-15, 8-7 Atlantic Coast) opened the scoring gates in the first inning. Celene Funke scored on a Jenna Ergle error. The mishap proved to be a sign of things to come, as the Eagles (14-25, 4-11) committed five errors over the course of the game.

Camryn Dolby replaced BC starting pitcher Susannah Anderson to start the second. Yet, BC still continued to struggle. Louisville scored two runs on an error by Emme Martinez. As the inning continued, the Cardinals took advantage, and senior Megan Hensley ultimately crushed a home run. BC responded in the bottom half of the frame, thanks to Carly Severini and Kennedy Labshere RBIs.

Louisville restored its five-run lead in the fourth, as Funke blasted a two-run shot. Finally, the Cardinals capped off their scoring on a three-run home run by Hensley in the sixth. It was a fantastic game for the senior, who hit two home runs while also picking up the victory as the starting pitcher.

While Louisville exploded offensively, BC failed to match its offensive output on Saturday. The two runs that the Eagles produced in the second inning were the only ones that they could muster during the series finale. In fact, BC only managed three hits on the day.

Conversely, the 10 runs they allowed marked just the fourth time the Eagles have given up double-digit runs in a game this season. While BC pitchers conceded eight hits, much of the damage was self-inflicted. The five Eagles errors are a season high and were especially disappointing, considering their recent success in that phase of the game. They’d committed just one combined error in the two previous games against Louisville and one in the three games before that as well.

For BC, it looks unlikely that it will reach 30 wins on the season—a mark that the Eagles have hit four of the last five years. BC will play Massachusetts on Wednesday before facing the top team in the nation, Florida State. With such a young roster, it always looked like this year would be a rebuilding one for head coach Ashley Obrest and her team. Still, it would be beneficial for the Eagles to establish momentum and building blocks, whether it is for this season or next.