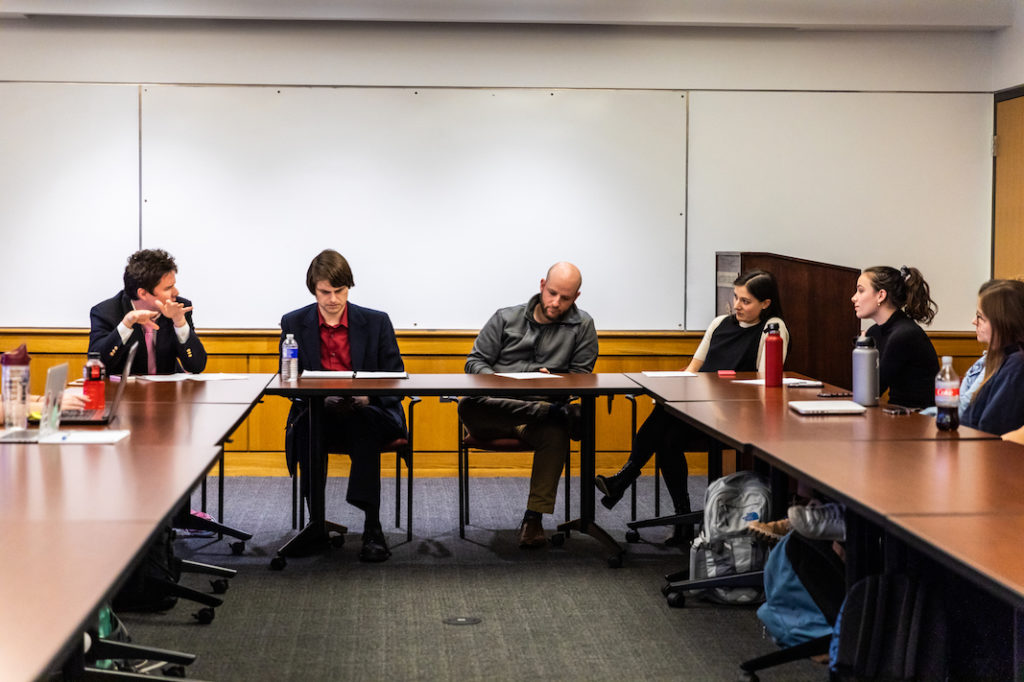 The Undergraduate Government of Boston College and College Democrats of BC joined forces Wednesday night, organizing a discussion on the role of social media in elections. BC faculty and political operatives shared their thoughts on different social media platforms and recent trends in online politicking.

Much of the evening focused on the most effective way to campaign through social media platforms.

Serazio answered first, saying that the answer varies depending on the level of campaign, noting the difference between a presidential election and a local race. He also argued that social platforms have definitely become more prominent over the last decade, but one shouldn’t see television as out of touch or irrelevant—he noted that President Donald Trump’s use of social media is tailored to spark discussion on cable networks.

Goldstein came at the question from a different angle: He said that each social media platform has varying degrees of importance.

“I think people are finding the impact of Facebook is dwindling,” he said.

He attributed this trend to a decrease in consumer trust in the platform, as well as its decreasing relevance for younger generations.

“Twitter has become the sort of battle zone of the social media platforms,” Goldstein said.

“Facebook is still the number one social media platform in terms of general political activity,” he said.

He attributed this to many factors, including Facebook’s widespread popularity, especially among older generations, who are more likely to vote than younger voters. Hopkins added that unlike Twitter or Instagram, Facebook exposes its users to content that they don’t necessarily seek out on their own.

High-profile Twitter users tend to be activists and journalists—so it is likely not representative of the voting body at large, according to Goldstein.

In response to the topic of activism-by-Tweet, Boyle said that the ability for people to have these conversations civilly is important.

“We’re turning conversations into this zero-sum game, and we’re not able to have nuanced and substantive conversations about issues that really matter,” she said.

Goldstein also endorsed Instagram. He said that Pressley’s campaign devoted significantly less resources to televised campaign content than her opponent in the primary—ten-term incumbent Mike Capuano—and instead prioritized digital ads, winning the race in the process.

Boyle rejoined the conversation by arguing that social media is a great way to target information at specific demographics in a cost-effective manner, although she noted that many voters have started to distrust social media.

“Will we hit a point where our trust in the platform is so low that it loses its ability to be an effective platform?” she said.

Another question that the panel addressed was whether or not people have agency or power to affect policies through social media.

There was a consensus between the panel members that social media is a perfect outlet for political expression and can control conversations on a national level, but it doesn’t necessarily have an effect on policy directly. Hopkins exhibited some skepticism toward online political activism, referring to it as “slacktivism.”