Home » Eagles Swept for First Time at No. 12 UNC 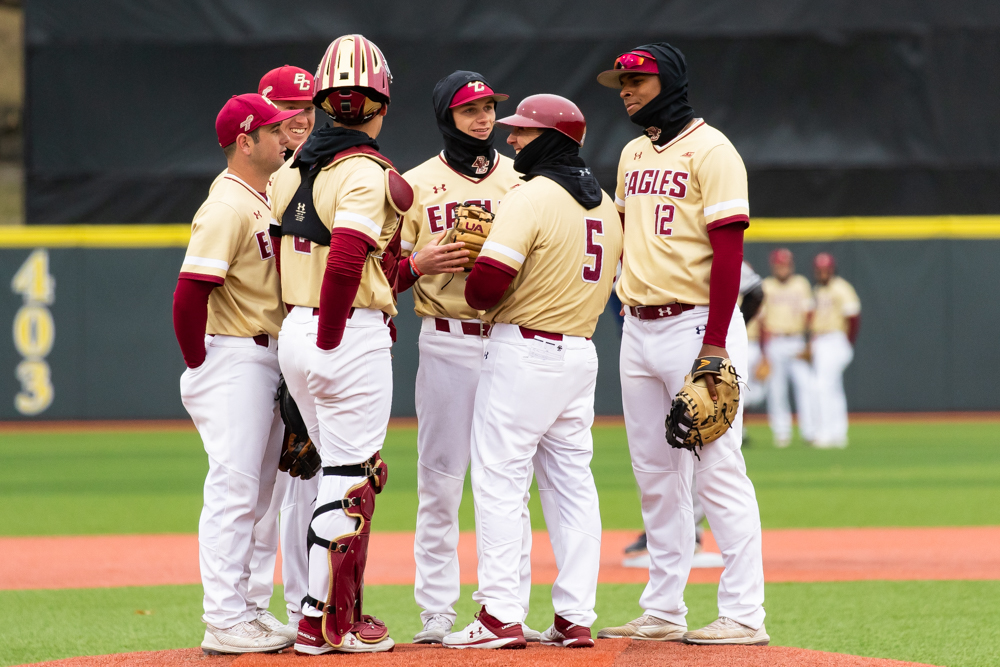 Eagles Swept for First Time at No. 12 UNC

Conference play this season has pitted Boston College baseball against a veritable murderer’s row of opponents. A road trip to take on No. 12 North Carolina marked the fifth straight weekend series the Eagles played against a ranked opponent and the sixth time in seven ACC series that BC faced off against a team in the Top 25. Despite that, however, the Eagles remained competitive, winning at least one game in each of the first six three-game ACC sets.

That finally changed against the Tar Heels, though. BC took UNC to extra innings twice, but simply couldn’t keep up with a high-powered Tar Heels offense that always seemed to find a hit when necessary. When the weekend ended, UNC (30-11, 13-8 Atlantic Coast) had scored a total of 35 runs and handed the Eagles (19-22, 7-14) their first sweep of the season.

BC trailed, 2-0, after two innings of Sunday’s series finale, but erased that deficit with a spectacular offensive outburst in the third. After consecutive one-out singles from Dante Baldelli and Jake Alu, Sal Frelick doubled into the left field corner to drive in Baldelli and get the Eagles on the board. Alu would score on a wild pitch, before Brian Dempsey walked to put two runners on base once again. BC wasn’t finished there, though. Jack Cunningham, Gian Martellini, and Cody Morissette came up with three straight run-scoring extra base hits, the last of which gave the Eagles a 6-2 lead.

The four-run deficit didn’t appear to faze the Tar Heels. Frelick made a spectacular catch—which ended up at No. 4 on the daily SportsCenter Top 10—while flipping over the right field fence to strand runners on first and second for UNC, but a lineup that finished the weekend with the fourth-most runs scored in the conference eventually found a way to break through—and it began in the fifth inning. A sacrifice fly from Dylan Enwiller cut the BC advantage to 6-3 before Michael Busch hit a solo home run to draw the Tar Heels closer. The big fly led Eagles head coach Mike Gambino to pull starter Matt Gill and turn to his bullpen. The move worked momentarily, as Sean Hughes recorded the final two outs of the frame to keep BC on top, but the decision appeared to backfire spectacularly in the sixth.

The disastrous frame, which saw UNC score a whopping 12 runs on eight hits, turned a two-run Eagles lead into a 16-6 deficit. Four different BC pitchers took the mound, but it didn’t seem to matter who was on the bump for the Eagles. UNC hit them, and hit them hard.

Hughes gave up an RBI single to Harris before being removed for Thomas Lane. The senior let two runs cross home plate on wild pitches, gave up a two-run double to Busch, then was removed for Joey Walsh. It only took the Tar Heels two pitches to do damage against the redshirt sophomore, though, as Danny Serretti cranked a three-run home run to left field to put UNC up, 12-6. Joe Mancini was next to try and put out the fire for the Eagles, but he allowed a run-scoring single from Brandon Martorano and a bases-clearing double from Enwiller before finally getting Busch to pop out to Frelick and end the inning.

Joe Suozzi drew BC closer, lacing a double into left to drive in a pair of runs and cut the deficit to 16-8, but it was far too little, too late. The Eagles threatened briefly in the ninth, putting runners on second and third with a pair of outs, but Ramon Jimenez grounded out to shortstop to finish the game.

Unfortunately for the Eagles, Saturday’s game ended the same way Friday’s did: in walkoff heartbreak. BC trailed, 7-1, in the fourth inning before rallying to send the game into extra innings with two runs in the ninth inning. But the push was all for naught, as Aaron Sabato’s double drove in Harris to doom the Eagles to defeat in a wild game.

Mason Pelio—who struggled slightly in his last start against Georgia Tech after a string of impressive performances—was nevertheless tabbed to start the second game of the doubleheader, a game before his usual spot in the rotation. His start against the Tar Heels, though, was more reminiscent of his outing against the Yellow Jackets than wins against ranked foes, such as Florida State and North Carolina State. The freshman made it through just three innings, allowing six runs while struggling with his command and walking four batters.

He threw two scoreless innings to start, though, and was staked to a lead after Gian Martellini’s single drove in Sal Frelick—who had three hits in both games of the doubleheader—in the top of the third, but the wheels came off in the bottom of the frame. An error from Cody Morissette put Enwiller on base to begin the inning, a walk to Brandon Martorano put two runners on with no one out, and Harris beat a throw to first to load the bases with no one out. Pelio badly needed to throw strikes, but suddenly couldn’t find the plate, bouncing a pitch in the dirt to bring in Enwiller, before throwing four straight balls to Michael Busch to once again juice the bases. Yet another walk brought in the go-ahead run for UNC, before Danny Serretti hammered a pitch over the right field fence to clear the bases. All of a sudden, the Eagles were down, 6-1.

Pelio rallied to strike out three straight batters and finally end the frame, but the damage was done. Emmett Sheehan relieved the freshman to start the fourth, allowing a run on a sacrifice fly from Serretti to extend the Tar Heels’ lead. All told, BC used seven pitchers to get through the final eight innings—for the most part, the Eagles bullpen was solid. The seven players that took the mound combined to allow just six hits and four runs, whiffing nine UNC batters in the process.

While BC’s relievers stepped up, its offense slowly came to life. First, it was the long ball that served as the spark plug. Home runs from Brian Dempsey, Baldelli, and Cunningham—who homered for the second straight game—cut the deficit to 8-4 in the seventh, before RBI singles from Baldelli and Frelick drove in three runs to narrow the Tar Heels lead to just 8-7.

UNC would tack on two more runs in the bottom of the frame, leaving the Eagles with more work to do, and the rally started in the eighth, thanks to some errant fielding. An error from the Tar Heels’ Ashton McGee allowed Morrisette to reach base, and the BC freshman advanced on a wild pitch prior to coming around to score all the way from second on yet another error from McGee.

The Eagles completed their improbable comeback in the ninth. With Will Sandy on to try and hold off BC, Jake Alu and Frelick drew walks to begin the inning, and Dempsey laid down a perfect sacrifice bunt to move both runners over. A wild pitch brought Alu home, and Martellini grabbed his second run of the game with a fly ball into right field. Frelick used his speed to tag up and score, sending the game to extra innings.

It wasn’t enough, though, as Cunningham struck out with the bases loaded in the 10th, setting the stage for Sabato’s game-winning double.

The first game of the doubleheader was eerily similar to the nightcap. The Eagles staged a ninth-inning rally to erase a late deficit, but couldn’t seal the deal, losing in eleven innings.

BC brought home the first run of the game. Alu and Frelick led off the game with singles, and Dempsey began a productive weekend with a line drive base hit into left field, plating Alu and giving the Eagles an early 1-0 lead. Much like in the second game of the weekend, though, it wouldn’t last long.

Dan Metzdorf took the ball to open the series and fought through 6 1/3 innings, striking out five but allowing six runs on four hits. The first run he allowed, however, was arguably not his fault. The senior walked Enwiller to open the game, but an error from Morissette and a passed ball allowed him to advance to third before a ground ball to Dempsey scored the senior to knot the game at one after an inning.

Yet BC kept producing, as three consecutive singles loaded the bases to start the second frame. Two sacrifice flies from Cunningham and Alu plated a pair of runs, while an error from Busch scored another. Jimenez struck out swinging to finally end the threat, but the Eagles still ended the rally up, 4-1.

The Tar Heels would respond by scoring five unanswered runs to flip the game on its head. Back-to-back big flies from Enwiller and Busch tied the score in the third, and UNC claimed its first lead of the game in the fifth frame on an RBI groundout from Sabato. A sacrifice fly from McGee gave the Tar Heels some insurance and chased Metzdorf, who exited after 107 pitches.

Hughes entered and held down the fort, pitching 1 2/3 innings of scoreless baseball, giving the Eagles time to piece together a late fightback. They waited until the ninth, but responded in spectacular fashion. Frelick lined a pitch back up the middle on a full count, before Dempsey worked a walk on a full count to put two runners on with one out for Cunningham. The junior made the most of his opportunity, depositing a home run over the right field wall and giving BC a 7-6 lead with one swing.

The Eagles couldn’t find another run, though, leaving the door open for UNC, and the conference’s highest scoring offense capitalized. Gill entered to try and close, but loaded the bases and allowed a run to cross home plate, thanks to Clemente Inclan’s sacrifice fly. Walsh struck out Cameran Brantley to send the game to extras, but, as would be the case later in the weekend, it was the Tar Heels who had the last laugh.

Inclan and Angel Zarate both hit one-out singles off Walsh, and Michael Busch followed by making weak contact on the ball. It squirmed to the left of the mound. Alu charged to try and make a play, only to see the ball slip under his glove. Dempsey was behind Alu and in position to field the ball, but looked to be caught by surprise that Alu had failed to field the ball and simply let it go past him. Zarate scored all the way from second, dooming BC to a hard-fought loss.

The series illustrates once again the Eagles’ pitching struggles. BC has the fourth-worst team earned-run average in the ACC, and the Eagles have seen a revolving door of arms take the Saturday starter spot in the weekend rotation. That’s not to mention the BC bullpen, which has had its fair share of struggles this season—the 12-run inning on Sunday was just the latest example of that. The Eagles bats should—and have for the most part—kept BC in games and series this season, but it’s hard to expect the Eagles to actually win series against some of the best teams in the country if they can’t find more consistency on the mound. The tilt against the No. 12 Tar Heels was just the latest example of that.