Olivia Wilde is not new to the world of directing. She’s been at the helm of music videos and short films for years. But with Booksmart, it’s different. It’s a directorial debut on every front, except technically speaking. And she knocks it straight out of the park.

Booksmart is a sweet, uplifting, hilarious, and soaring generational comedy. The film follows two best friends and protagonists, Molly and Amy (Beanie Feldstein and Kaitlyn Dever respectively), on the last day and night of their senior year of high school. Both girls are academic powerhouses, set to go to Ivy League schools. But they are social outcasts, spurned by the cool kids at school. In a hilariously dramatic scene, Molly learns that all of the so-called jocks, stoners, and other high school elites did just as well without sacrificing their social lives. Molly, determined not to miss out on the true high school experience, convinces Amy that they have to spend their last night partying to make up for the four years spent studying.

Over the course of the 105-minute run-time, the audience watches as the two girls move from one funny scene to the next. Among other wild adventures, they get picked up in an Uber by their off-duty principal, wind up at a yacht party all by themselves in an effort to get to the famed last-night-of-senior-year party and enjoy themselves. And, as the camera passes through the comedy, the film touches on a number of more serious ideas. Booksmart delicately and deftly explores the ideas of sexuality, self-honesty, acceptance, and the transition between parts of life without stagnating on any.

Decades are defined by their movies and, in a reverse, movies can define a decade—an era, a period of time. Fast Times at Ridgemont High is the early ’80s coming-of-age high school comedy that captures the time. Clueless does the same for teenage life in the ’90s. But there’s been a gaping hole in the 2010s—no movie has filled that niche. Until Booksmart. This film is the hilarious high school comedy that seems to almost perfectly capture Gen Z life, a comedy that defines the era, abstracting out its essence without feeling forced, documentarian, or fake.

And this was Wilde’s vision all along.

“My dream was to make a generational anthem,” Wilde said in a college roundtable interview. “I was really inspired by movies like The Breakfast Club and Dazed and Confused and Clueless [and] Fast Times at Ridgemont High.

“For me, I was always wondering, ‘Where’s my Breakfast Club?’ And I didn’t know how that would come into my life. And then I read an original draft of the script. And I thought, ‘Oh, it’s in here, it’s inside this story, but it needs to be updated to fit this generation, to honor this generation and how evolved they are.’”

The work that Katie Silberman and the other screenwriters did on this script is truly phenomenal. The story’s pacing is perfect, the dialogue is fast, witty, and smart. The comedy is perfectly timed and spread evenly throughout the course of the movie. Often, when films try to portray “the young people,” it comes off as dated, offensive, or out of touch. Booksmart does not. The characters say things that children their age would and do say. They do not act how adults think they act, rather, they act as they do. Booksmart is also not reluctant to mix in some silliness to augment the comedy of reality—in one scene, the two girls accidentally take ecstasy and see themselves as stop-motion dolls. This scene could very easily have thrown off the entirety of the movie, but instead it turns up the comedy another notch.

The cast of Booksmart is also stellar—Dever and Feldstein have perfect chemistry on screen (which is likely due to their perfect chemistry off-screen, the two lived together and became fast friends during the 26-day shoot). But the side characters are also all fantastic and irreducible to a stereotype. In another movie, Noah Galvin’s George would be “the funny gay character.” In Booksmart, he is funny and he is gay, but his character is made of more than that. There is depth to George, and to every other secondary character. More to that effect, in these older generational comedies, there would be one gay character, one jock, one nerd, one etc … In Booksmart, sexuality is an aspect of several of the characters, but it is not the only aspect that defines them, which is refreshing.
Booksmart shines for so many reasons, but it is the dimensionality of characters that makes it feel real, even as the comedy borders on the ridiculous and absurd. 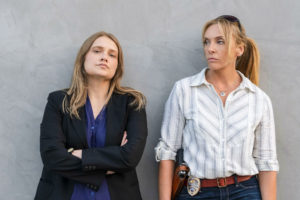