Home » Behind Metzdorf’s Gem, BC Beats Duke in Series Opener 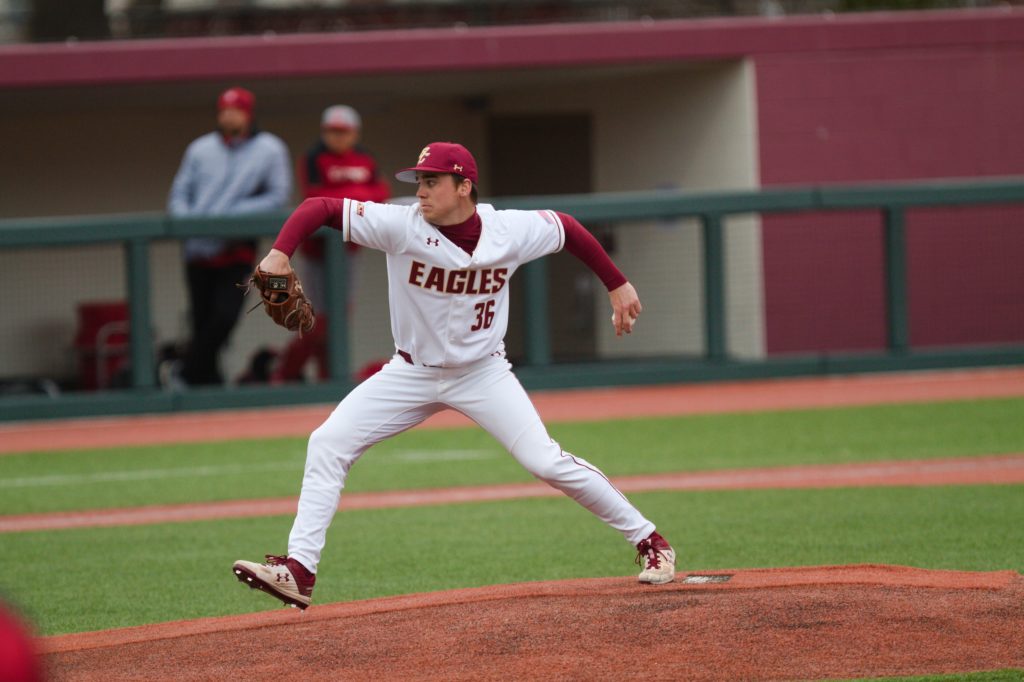 Behind Metzdorf’s Gem, BC Beats Duke in Series Opener

Entering its matchup against Duke, Boston College baseball had managed just two shutouts during the season. The Eagles blanked Rhode Island on April 9 and then-No. 19 Florida State on March 31. BC was able to rekindle some of that magic against the Blue Devils in the series opener on Friday at the Harrington Athletics Village. Using a phenomenal performance from senior pitcher Dan Metzdorf, the Eagles kicked off their series against Duke with an impressive 5-0 win.

Metzdorf pitched a career-high 8 1/3 innings in one of his best efforts of the season. The lefthander notched his fifth win of the year as he fanned a season-high nine batters and did not walk a single Blue Devil. The performance also marked the sixth game in a row in which he pitched six-plus innings.

To start, Duke’s (25-17, 11-11 Atlantic Coast) Kennie Taylor doubled to right field, but none of his teammates could drive him in. While the rest of the Blue Devils struggled to get anything going against Metzdorf, Taylor finished the evening batting 3-for-4, securing a double and two triples. BC (22-22, 8-14) senior Jake Alu started the bottom of the first with a single, but the next three Eagles batters went down to end the inning.

During the top of the second, an error—coupled with a hit—put runners on first and third for Duke, but Metzdorf escaped the inning unscathed. BC then went three-up, three-down to close out the second inning. Taylor smashed his first triple, but he was once again left stranded after Matt Mervis struck out. The Eagles scored the first run, courtesy of a single by Alu. Much like Taylor, Alu shined as he went 3-for-4 on the night.

Over the course of the next three innings, neither team made much noise. Metzdorf gave up zero hits while the Eagles earned a hit in all three frames. Brian Dempsey singled in the fourth inning, but he was caught trying to steal second. Freshman Cody Morissette banged a double during the fifth and made his way to third base. Peter Burns and Chris Galland flew out and struck out, though, stranding Morissette. Then in the sixth, Sal Frelick singled, but Dempsey grounded into a double play on the next at-bat.

The Eagles’ big breakthrough came in the seventh. After Metzdorf once again stymied Duke—with a little help from another top-10 play by Frelick—BC commenced the bottom of the inning with a flurry of hits. First baseman Jack Cunningham and Gian Martellini followed up with a single to place runners on the corners. Morissette then came to the plate and launched a sac fly to center, driving in Cunningham. That wasn’t the end of the scoring for the Eagles, however. Duke pitcher Ben Gross tried to pickoff Joe Suozzi, who was pinch-running for Martellini. But an errant Gross pickoff attempt allowed Suozzi to advance to third all the way from first. Dante Baldelli then doubled down the leftfield line to send Suozzi home.

At this point, Matt Dockman came in to relieve Gross, but he too failed to silence the Eagles. Burns grounded out, but Baldelli moved to third. Next up, Galland hit a single to wrap up BC’s three-run inning. In the eighth, Taylor recorded his second triple, but Metzdorf fanned Mervis to quash the scoring opportunity. After Alu and Frelick got on base, Dempsey doubled to give the Eagles their fifth and final run of the night.

This cushion was more than enough in the end. In the top of the ninth, Metzdorf struck out Chase Cheek but gave up two singles to Kyle Gallagher and Ethan Murray. Head coach Mike Gambino decided to play it safe and pull Metzdorf in favor of Matt Gill. That decision proved to be the right one as Gill downed the next two batters without much incident, securing the BC victory.

Friday’s win is exactly what the Eagles needed at this juncture of the season. After a rough stretch in which BC lost five of six, it has now rattled off three straight wins. This victory looks all the more impressive, considering Duke came into this series riding a six-game winning streak. Yet, all too often, BC has only able to put together one strong performance during its weekend series against ACC foes. The Eagles’ only series win against a conference opponent came in March against the Seminoles. Granted, it’s very difficult to string together consistent results against the best baseball teams in the nation, but BC very clearly has the talent to compete. The pressure is now on the Eagles to achieve similar results against the Blue Devils on Saturday and Sunday.

Jeb Bush Orchestra Gets Funky On Air With WZBC
2019 ACC Championship Preview: Lacrosse vs. No. 3 UNC