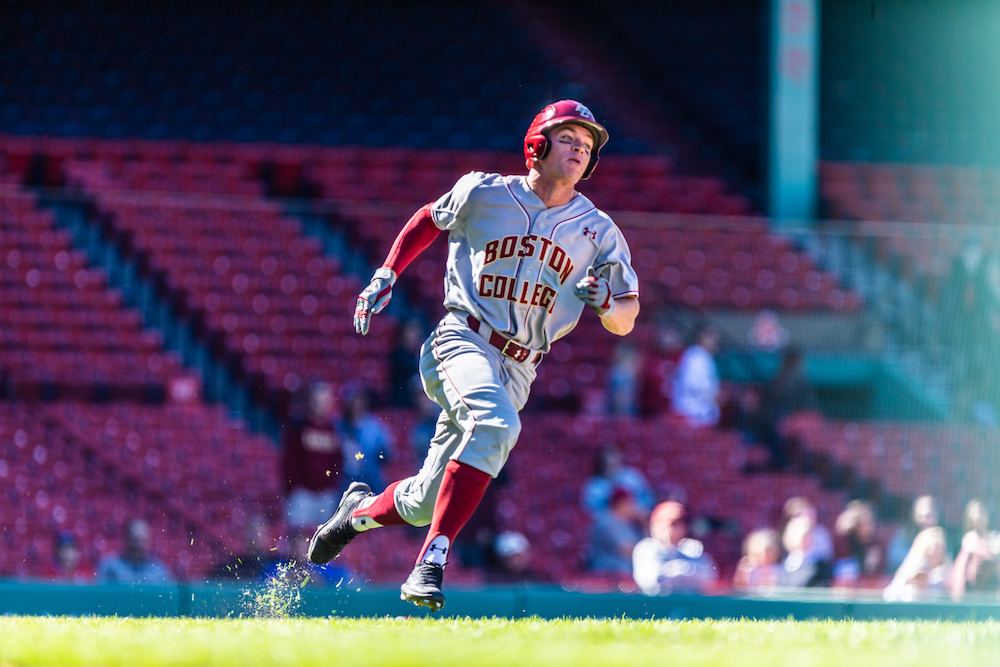 Mancini, Timely Hitting Leads BC to Win in Rhode Island

When looking at the box score, it would be logical for one to think that Boston College baseball had a comfortable win over Rhode Island. After all, the Eagles had 11 hits to URI’s four, did not commit an error, and received one of their best starting pitching performances of the season. Yet, Tuesday afternoon’s contest was anything but easy for BC—it took all nine innings for BC to pull out a 2-1 win.

Rhode Island (18-23, 9-6 Atlantic 10) struck first blood in the second inning, as a Josh Brodeur single to left field drove in Jordan Laske to give the Rams an early 1-0 lead. That was all Rhode Island would manage against Eagles (23-24, 8-16 Atlantic Coast) starter Joe Mancini, though, as the freshman turned in a stellar outing. Mancini went a season-high seven innings, scattering three hits while striking out four.

Due to a tremendous pitching performance in the early going from Rhode Island freshman Bo Brutti, though, the Rams maintained their narrow lead until the seventh inning. Brutti went four innings, working around four hits and a walk. The Rhode Island bullpen was similarly up to par, as Vitaly Jangols followed with two scoreless innings.

However, as the game progressed, the Eagles looked increasingly dangerous offensively. In the fourth, BC began the inning with runners on first and second, but a double play ended the threat. The Eagles had runners on the corners with no outs in the sixth, yet, once again, a double play prevented them from scoring.

In the seventh, BC finally broke through against Jangols. Freshman Lucas Stalman picked up the fifth RBI of his career on a double to left, as Chris Galland crossed home plate for the Eagles.

The Eagles came agonizingly close to taking the lead in the eighth, this time against Rams reliever Jon Morrison. After singles from Brian Dempsey and Gian Martellini—the latter extending a 10-game hitting streak—and a walk drawn by Jack Cunningham, BC had the bases loaded with only one out. Martellini’s single additionally ended a 0-for-26 slump for the Eagles while batting with runners in scoring position. Unfortunately for BC, it could not capitalize on the situation. Two fly outs allowed the Rams to escape unscathed.

But it wasn’t long before the Eagles finally pushed their second run across the plate. After initially reaching due to a fielding error in the top of the ninth, Dante Baldelli scored, thanks to a double from Jake Alu. It was the senior’s 14th two-bagger of the season—a team high. BC then closed the game out in the bottom half of the ninth, with Matt Gill picking up his team-high third save. The Eagles bridged the gap to the final frame with a scoreless eighth from Thomas Lane, who struck out one to earn the win.

It was a much-needed win for BC, as it was coming off two tough home defeats at the hands of Duke. The Eagles have another very winnable game tomorrow against Harvard before they finish the rest of their conference season. If BC wants to conclude its campaign with a winning record, it must make the most of every opportunity it faces—and continuing a six-game non-conference winning streak is just the recipe for that.

Three-Run Fourth Lifts Eagles Past Visiting UMass Lowell
Letter to the Editor: In Response to “The New England Classic Calls for Abolition of UGBC”